Fall in love with the Wards…


Mechanic and garage owner, Kane Harmon is used to the wealthy beautiful women visiting his beach town. He doesn't get involved because he knows most females would merely be slumming for the summer.


Except Halley Ward isn't just passing through. She lives a solitary life in a bungalow on the beach. A woman tormented by her past, distant from her wealthy family, different from Kane's usual fare of town girls who know his M.O.- Don't expect more than he's willing to give.


Kane rescues Halley and her broken down car from the side of the road and instantly he's hooked. She says she's not interested in him. He knows she lies. And he makes it his mission to bring her back to life, to return her emotionally to her family. To show her the colors around her were as vibrant as the ones she puts on her canvas.


Until past meets present and threatens all the progress they've made. Then it's Halley's turn to step up and stand up for the relationship and life she's finally coming to believe she deserves

Now…what do you say to some Italian ices? Ever been to Hank’s?”

She shook her head. “I’ve passed it but there’s always been a ridiculous crowd of people out front.”

“Well, it’s worth the wait. Feel like going on the way home?”

She nodded. “If you can keep me occupied while we wait, then I don’t mind.”

When they arrived at Hank’s, an outdoor ice cream and Italian ices stand, they discovered a short line. Not enough for him to have to entertain her, and before they knew it, they were ordering.

Because they also had ice cream, Halley changed her mind when it came to ordering and asked for vanilla ice cream with hot fudge topping. Kane got a red Italian ice.

They took their desserts and walked over to a short brick wall and hopped up, sitting side by side, legs swinging as they ate.

He finished his first. “Good?” he asked, putting his cup down beside him.

She glanced over, laughing. “Your tongue is red.”

He stuck it out at her and grinned.

“Want some of mine?” She held out the spoon of vanilla and chocolate mixed.

“No, doesn’t exactly mix with my cherry.” He paused, as if thinking of something. “Unless…”

“Hmm?” She raised an eyebrow.

“Unless I’m kissing you.” And before she could react, he leaned over and swept his tongue over her lips and into her mouth, devouring her quickly but thoroughly.

She moaned into him, leaning in close, savoring the warm cherry flavor he brought to her dessert.

Before she was ready, he lifted his head and met her gaze, his eyes dark and hungry. “Now that is how to eat an ice cream.” 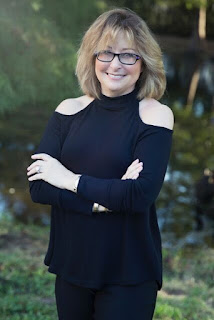 Carly Phillips is the N.Y. Times and USA Today Bestselling Author of over 50 sexy contemporary romance novels, including the Indie published, Dare to Love Series. She is happily married to her college sweetheart, the mother of two nearly adult daughters and three crazy dogs. Carly loves social media and is always around to interact with her readers.

I've been reading books by Carly Phillips for years and have loved them all. Fearless is absolutely my favorite book she has ever written. I literally read it in one sitting and wanted to restart it as soon as I finished reading it.

Halley Ward and her older sister Phoebe were put into the foster system at a very young age. Their baby sister Juliette had already gone to live with her father and the girls didn't hear from family until their Aunt Joy found out about them being in the foster system 10 years later. Halley is happiest at her oceanside cottage painting. She is happy to live a pretty solitary life with no commitments to another person. Well she is until she meets Kane Harmon again and he keeps appearing in her life. I love that Kane was a friend first with Halley and a constant presence in her life without ever pushing her to do or be more than what se was ready for. They had a pretty instant attraction to one another, yet there really was more of a slow burn to them being together. Based on everything we learned of Halley's past, any other type of start wouldn't have worked for them long term.

Halley comes across as pretty delicate in the beginning. However when you find out everything she has survived from the time with her mother and then in foster care, she has a backbone and a strength to her that most people don't have. Yes she chooses to spend time with only a select few people as self-preservation, but I had so much respect for Halley the more we learned about all she had gone through. When her mother comes back into the picture, I honestly hoped with everything in me that she was ready to change and be a part of her children's lives again. I had a feeling about what she was going to do, but still broke my heart to see how it effected Halley.

Fearless hit on all my emotions and I loved every single minute of this book. I laughed, cried, sighed and even got angry a couple of times, but loved the ride along the way. I loved Halley and Kane's story and can't wait to read Phoebe's story next.

Oy! This one was good. So freaking good! I adore Carly's writing, but this book just had a little something extra special about it. I think it had a lot to do with the heroine, Halley. Carly typically writes strong and witty heroines, and Halley was certainly all that. The difference was she really had to dig deep to find those qualities in herself. I loved watching Halley blossom. Page by page her layers were peeled back, until she finally recognized the strength that was always just under the surface.

Kane. Sweet baby Jesus, I have a crush on this fictional hero. He's a hard worker, he cares about his family, and he's genuinely a great guy. I adore how he handled Halley. He knew she was skittish but he stood firm in gaining her trust. He wasn't pushy in an intrusive way, he was just present. They built a sort of friendship. It was a friendship with some serious hot chemistry, but a friendship nonetheless.

Speaking of chemistry...wow! These two lit up the damn pages! Seriously, the lust and the adoration between Kane and Halley was palpable.

Both of these characters are dealing with baggage from family members, which makes it that much harder for their relationship to grow. Even when Kane had to stay away and respect Halley's decision, he still supported her. He loved her from afar. See, he's kinda perfect.

This book was a fabulous start to a brand spanking new series! I'm anxiously awaiting the next one!