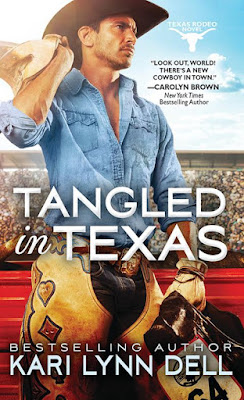 It took 32 seconds to end his career.
But it only took 1 to change his life.

Thirty-two seconds. That’s how long it took for Delon Sanchez’s life to end. One minute he was the best bronc rider in the Panhandle and the next he was nothing. Knee shattered, future in question, all he can do is pull together the pieces…and wonder what cruel trick of fate has thrown him into the path of his ex, the oh-so-perfect Tori Patterson.

Tori’s come home after her husband’s death, intent on escaping the public eye. It’s just her luck that Delon limps into her physical therapy office, desperate for help. All hard-packed muscle and dark-eyed temptation, he’s never been anything but a bad idea. And yet, seeing him again, Tori can’t remember what made her choose foolish pride over love…or why, with this second, final chance to right old wrongs, the smartest choice would be to run from this gorgeous rodeo boy as fast as her boots can take her.

Kari Lynn Dell is a ranch-raised Montana cowgirl who attended her first rodeo at two weeks old and has existed in a state of horse-induced poverty ever since. She lives on the Blackfeet Reservation in her parents' bunkhouse along with her husband, her son, and Max the Cowdog, with a tipi on her lawn, Glacier National Park on her doorstep and Canada within spitting distance. Her debut novel, The Long Ride Home, was published in 2015. She also writes a ranch and rodeo humor column for several regional newspapers and a national agricultural publication.

****Giveaway****
One (1) print copy of Tangled in Texas is available. Please comment on the post including your email address to be eligible to win.  I will draw the winner on January 1. Giveaway is limited to US residents only. 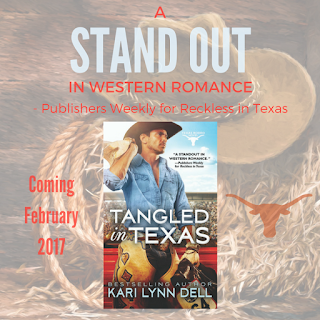 
“The boys are getting out of hand.” Delon squeezed her waist, his hand warm through the thin silk of her dress, and gave her a look that set off another explosion, deeper, more centrally located. “You’d better stick with me.”
Posted by mslizalou at Thursday, December 29, 2016 No comments: 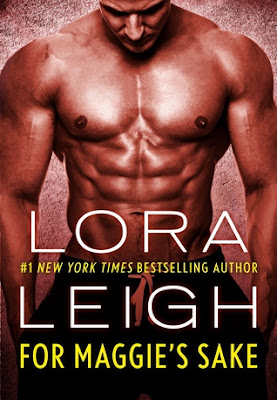 Maggie Chavez is in protective custody with a member of her former lover's SEAL team. Joe, her ex-lover, thinks Maggie is hiding information from him about a powerful drug lord and the deaths of some SEALs. He intends to seduce her and get the information before she can sell it back to the drug cartel. But the desire crackles between them and their attraction is undeniable. How can Joe use her and leave her, when all he wants is to hold her close and never let go?

I somehow had never read a book by Lora Leigh until For Maggie's Sake. Yes I know she has been around for years, but for some reason I missed out on her books when they were originally published. I was excited for the opportunity to give her books a try when offered a review copy of For Maggie's Sake. I have to say I very much enjoyed her voice and look forward to reading many more books from her in the future.

For Maggie's Sake hit on all my favorite romantic suspense elements. The mystery wasn't too over the top and kept me engaged to the end. The sex was smoking hot and I loved the chemistry between Maggie and Joe. I'm also a pretty big fan of reunion-type stories, so the fact that Joe and Maggie had a past together was just a bonus for me. I hated they had to go through the years apart, with Maggie marrying another man to find one another again, but honestly felt like they wouldn't have been ready for a relationship then. I hated Maggie ended up marrying a man who was a total ass and only went after her because he knew it would hurt Joe. The fact Grant was supposed to be Joe's best friend made me even angrier.

For Maggie's Sake was a smoking hot romantic suspense book. The mystery of where the evidence was kept me engaged to the end and I loved seeing Maggie and Joe figure out what they needed to do this time to make their relationship work.

Posted by mslizalou at Wednesday, December 28, 2016 No comments: 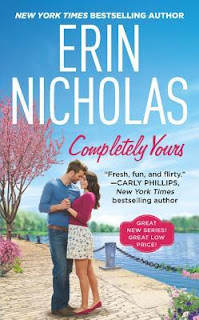 Kiera Connelly leads a quiet life, and that's just how she likes it. She's built a name as a graphic designer and meets up with her friends online, all from the comfort of her living room couch. But when a rare outing turns disastrous, Kiera finds herself up close and way too personal with an unbelievably hot real-life hero.

Zach Ashley doesn't see himself as a hero. He's just a regular guy who gets to help people every day as an EMT. But when he's called to a scene and has to treat his most gorgeous patient ever, he finds himself mixing work with pleasure. He never hesitates to put his life on the line...but will he ever risk his heart?

I've somehow missed other books from Erin Nicholas, but when I read the blurb for Completely Yours, I knew I had to read this book. I absolutely adored Erin Nicholas's voice and look forward to reading many more books from her in the future.

Kiera and Zach had a pretty great connection from the moment they met even though they are so very different. Kiera is a total gamer geek and Zach is pretty opposed to gaming because it is all his sister Aimee has done for months. The fact that Kiera is the graphic designer for Aimee's favorite video game could have been a major issue, but somehow once Zach discovered the truth, he was okay with it.

I really loved how different Kiera and Zach were and yet felt like they made a really incredible couple. They had amazing chemistry and while I thought they would have more spice in their love making, I loved the sweetness of their romance and relationship. I loved that Kiera got Zach pretty much from the very beginning. Zach took longer to really understand Kiera, but I loved how hard he tried and how he stepped outside his comfort zone to learn about Kiera's life and understand everything. I think it made them a stronger couple in the end.

I really enjoyed Completely Yours. It was a wonderful story and a sweet and adorable romance. I look forward to reading more books in the Opposites Attract series.

Posted by mslizalou at Tuesday, December 27, 2016 No comments: