I know I've been a bit quiet lately. I took a few days off work in the last couple of weeks to go hang out with my cousins. They live about 2 hours from me and have a pool in their backyard. Now it has felt like it is 150* in Nashville for the last few weeks, so the idea of hanging by the pool for a few days sounded great. I was great, even if it felt even hotter there than it does here. Granted floating around in the pool for a few hours really does make it easier to deal with the heat index.
Of course, when I got home I realized how out of control I've let my diet and exercise routine get...maybe lack of diet and exercise routine is a better description. So to help get me back on track, I re-joined Weight Watchers this week. Now the new points+ system is taking some getting used to. I knew many of the old point values on some of my favorite items. Now those numbers are all out the window. I'm up for the challenge. I would love to lose at least 15 pounds before my Vegas trip at the end of Sept. If I'm really careful with food and stick to my exercise program, I'll be there. So now, I have it set up to use my elliptical 3-4 days a week and run 2-3 days each week. I'll mostly be on the elliptical until the temps drop a little. I'm also training for the Franklin Classic 5K for Labor Day, so I need to make sure I'm doing interval training even when on my elliptical. I'm sure my neighbors will love me when I workout at 4:30 in the morning, but mornings are best for me to stick to a workout schedule. Running will take place on the weekends for the next little bit, with 1 run after work each week.
My goal is to be down 20 pounds by the time I turn 40 at the end of October. So tomorrow is my last day to eat junk. After that I'm sticking to my WW diet very closely. Wish me luck, as I love junk food probably more than most teenagers.
Posted by mslizalou at Thursday, July 28, 2011 1 comment:

Too Hot To Touch

Too Hot To Touch is the first book in the Legendary Lovers trilogy by Julie Leto. From the back cover.~

The spirit of a masked legend lives on…

Art expert Alex Aguilar is an honest man. When he inherits an auction house dealing in shady merchandise, he's desperate to catalog everything before the goods tarnish his sterling reputation. But even if the merchandise isn't exactly hot, his scorching new assistant, Lucienne Bonet, definitely is. Too bad his pesky moral code means he has to keep his hands off…or does he?

Lucienne isn't quite what she seems. She's a thief and she's after a very valuable ring that once belonged to a legendary masked hero…Alex's ancestor. But as Alex deliciously undoes her plans— and her clothes—Lucienne realizes that eventually, her mask will have to come off, too!

I actually won this trilogy from Julie on an auction earlier this year. I’ve been waiting for what seems like months to read this series and was so excited when I received Too Hot To Touch in the mail.

I loved Too Hot To Touch so much! Alex is the first born son to Ramon Murrieta and half brother to Ramon’s son Michael. Alex is also related to a legendary masked hero through his father. Lucienne Bonet, whose real name is Lucy Burnett, has taken a job at El Dorado Auction House to help out her foster brother Danny, who also happens to be half brother to Alex and Michael. Alex and Lucienne are attracted to one another from the first time the meet. However, Alex doesn’t believe in mixing business with pleasure, so he fires Lucienne before they take their relationship to a more personal level.

I love both Alex and Lucy (I see her as a Lucy more than a Lucienne). Both put family first. Lucy with Danny and Alex with Michael and his mother. However, neither can seem to keep their hands off the other once they share their first explosive kiss. In fact, Lucy and Alex have one of the sexiest shower scenes I’ve ever read. As Lucy’s past comes to light, Alex must decide if he can accept her for who she is.

Too Hot To Touch is a super sexy Blaze release and July 19, 2011 is the release date. Can be ordered from your favorite online retailer, your local bookstore, and even Wal-Mart and Target. Since this is the 10 year anniversary of Harlequin Blaze, Julie’s first Blaze book Exposed is included in the 10th anniversary edition.

Cold Touch is the newest release by Leslie Parrish. From the back cover.~

Since being gifted-or cursed-with her ability to touch a lifeless body and relive the victim's final moments, Olivia Wainwright has died a hundred deaths. She hears the screams, tastes the fear, and feels the excruciating pain-and every glimpse into this darkness draws her deeper into danger.
Now she's met a man who offers her a glimmer of light. Savannah detective Gabe cooper might look like a sexy good old boy, but his laid-back attitude hides a sharp mind and a protective heart. He doesn't believe in psychics-until he meets Olivia and sees firsthand how her dark gift ravages her spirit.

As their bond deepens, Olivia will have to choose between her cold gift and the warmth Gabe provides. But her past is catching up with her, and Gabe can't refuse when she needs his help solving a crime that's haunted her for over a decade: her own murder.

I loved both of the main characters so much. Olivia's "gift" give me chills. I can't imagine willingly touching a dead body to experience the last 2 minutes and 10 seconds of that person's life to see how they died. Gabe is so protective of everyone around him. He and Olivia are attracted to one another from their very first meeting. Once Gabe realized he had real feelings for Olivia, his protection mode went into overdrive.

I also loved Gabe's partner Ty and Olivia's co-workers and her sister. In fact, I would love to see some of the secondary characters get books in the future. I don't want to post any spoilers about this book. I can only say I felt so many different emotions as I read this story. I cheered Olivia and Gabe on from the very beginning. I laughed out loud a few times, and cried like a baby at other times. I really thought I had the bad guy figured out with about 100 pages left, but was off the mark. I love that Leslie kept me guessing and I still had to wait for the reveal.
Cold Touch is one of the best books I've read all year. It is filled with suspense, action, and romance. I personally and hoping and praying we get more books from Leslie Parrish in the future!

I selected the 2 winners using random.org. Congratulations to #23 Kristin and #29 Brenda Hyde. I'll send out an email to you both to get your snail mail addresses and forward them to Leslie.

Thanks for everyone who posted a comment. I'm currently reading Cold Touch and can only say if you didn't win, it is so worth going out and buying a copy of your own.
Posted by mslizalou at Monday, July 11, 2011 No comments: 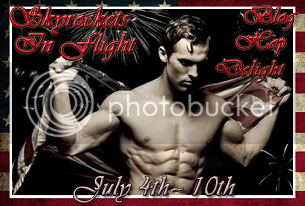 I’ve been a fan of Leslie Kelly’s books for years. She writes super sexy contemporary romances with fabulous characters. Two years ago she started writing psychological suspenseful books as Leslie Parrish. I love her Leslie Kelly books and still buy them as soon as they are released. However, I truly believe Leslie found her voice with her Leslie Parrish books.

The first series of books Leslie Parrish released were the Black CATs novels. The three books in this series are Fade to Black, Pitch Black, and Black at Heart. I loved each and every one of these books and I’m still very hopeful we will get more books in the Black CATs series (really want Brandon’s book so much).

The Extrasensory Agents series came out last year. The first book in the series is Cold Sight and is a little darker than the Black CATs books. I loved it from page 1 and wanted more as soon as I was finished reading. On July 5, the newest Extrasensory Agents book is released. The newest book in the series is Cold Touch. Here is the blurb from the author’s website. ~

Since being gifted--or cursed--with her ability to touch a lifeless body and relive the victim's final moments, Olivia Wainwright has died a hundred deaths. She hears the screams, tastes the fear; feels the excruciating pain--and every glimpse into this darkness draws her deeper into danger.

Now, though, she's met a man who offers a glimmer of light. Savannah Detective Gabe Cooper might look like a sexy good-old-boy, but his laid-back attitude hides a sharp mind and a protective heart. He doesn't believe in psychics--until he meets Olivia and sees firsthand how her dark gift ravages her spirit.
As their bond deepens, Olivia will have to choose between her cold gift and the warmth Gabe provides. But her past is catching up with her, and Gabe can't refuse when she needs his help solving a crime that's haunted her for over a decade...her own murder.

I’m giving away 2 copies of Cold Touch during the blog hop. Hope new readers fall in love with her books as much as I have. The giveaway is open from July 4 -10 and I’ll draw winners from all of the comments during that time. Due to shopping cost, this giveaway is open to the US only (sorry).