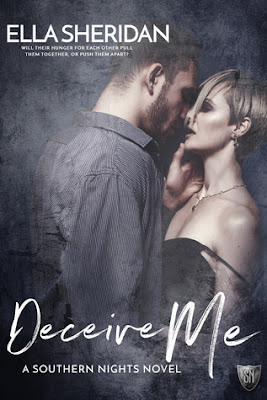 Elliot Smith has trained hard to live alone and work alone, even when it comes to her job as a security specialist for JCL Security. No relationships, no ties, except the one to the man who kidnapped and murdered her mother. She’ll do anything to kill Martin Diako, the untouchable South African pirate king. When Deacon Walsh walks into her office, she finally sees a chance to do just that.

Deacon went from soldier to mercenary warrior to stay-at-home dad, and now his past is back to haunt him. Martin Diako, the father of the terrorist Deacon killed two years ago, is coming for revenge, and he has his sight set on Deacon’s daughter. An heir for an heir. Deacon will do anything to protect her, even if it means asking for help. But the security team he’s hired comes with an added complication: the only woman to interest him since his wife died.

Deacon always leads his team, and Elliot protects hers. They might have one chance at their enemy—if they can work together. Will their hunger for each other pull them together, or push them apart?

I stumbled upon Ella Sheridan when I saw a post on Facebook about her first book in the Southern Nights series. I’m always cautious trying new to me authors. I'm pretty specific in what I like when it comes to romance. From that very first book I read, I have been hooked! I'm so happy that I gave her books a try!

I've always thought Ms. Sheridan was a talented writer. She writes characters that draw me in and they make me care about them. I always want more when the book is finished. Not because the story isn't solid or complete, it's because I fall hard for the hero and heroine. I want to stay in their world a little longer. I fully anticipated enjoying this latest addition to a fantastic series. But I wasn't prepared to be so overwhelmed with emotion and heart racing excitement. Deceive Me is something special.

The writing, as always, is phenomenal. The scenes are detailed, but not so much that I find myself skimming and wishing the author would just get on with it. The characters feel real. I always get a good sense of what Ella's characters are feeling, even when they're not saying anything. Maybe it's the way she so easily describes their body language or facial expressions.

Elliot is a kick ass heroine! The scene where she firsts meets Deacon Walsh had me laughing out loud! She puts him in his place so completely that he's left in utter shock! It was amazing! There's a lot going on in her head and heart that help to soften her up a bit. But what you see on the outside is a woman determined to obliterate the man that haunts her nightmares.

Deacon has spent almost two years picking up the pieces of his life after the death of his wife. I really liked being able to see all his vulnerability under his warrior exterior. He's all alpha male, but I got a really good sense of his struggles to keep it all together and protect his daughter from an enemy.

There's a ton of chemistry between these two. Right from the get go...even when Elliot puts Deacon on his ass. That just made him want her more. There's so much sexual tension in this book. Every time I thought we'd get to the hot sweaty sexy times, they'd pull back! I was all like...No!! Just have naked times already! But they needed to have the slow burn. And when they finally did get to the sheet yoga...sweet baby Jesus! It was so damn good!

There are secrets between Elliot and Deacon. They could very well destroy any chance they have to be together. Elliot doesn't trust easy, and ripping open the wounds on her heart to let Deacon in is utterly agonizing. She's been hired to help him protect his daughter. He needs to have full faith and trust in her to always tell him everything. When all of this comes to a head it left me breathless. The emotion in this book is like nothing Ella has written before, at least in my opinion. I snot and bawled like a toddler. My heart hurt for Elliot. The way she punishes herself after Deacon finds out her secret is soul shredding.

There's so much that makes this book great. There's action, romance, lumpy throat emotion, sexy times, and laughs. The camaraderie between the team mates makes this series feel like a family saga. And they are family, not by blood, but by choice and circumstance. Elliot has a band of over protective brothers in her team mates. They are all up in her business. They don't try and smother her independence or strength, they just have her back...always.

I wish I could tell you all the specific things that I adored about this book, but then I'd be robbing you of the experience to see for yourself. I truly think that, Deceive Me is Ella Sheridan's best book yet! I was gobsmacked by how much I loved it. I know I shouldn't be surprised since I've loved everything else she's put out. But she really outdid herself with this one!