AFTER I FALL RELEASE DAY SPOTLIGHT 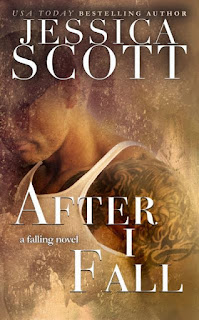 Blurb:
Her entire life has been a lie. Being with Eli is the most honest thing she’s ever done.

Until she meets Eli Winter.

Eli throws her entire life into chaos when he denies her the one thing she wants from him.

One chance encounter stokes her desire for the man who refused to touch her and left her questioning everything.

When Parker tries to help his new business, the spotlight turns on Eli's military record. And the war he's tried to forget may  destroy them both. 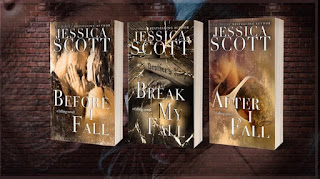 PARKER
I needed to get out of my apartment and away from the creeping sadness that threatened to drown me if I stayed alone one more minute.
Tomorrow, I will find the owner of The Pint. Tomorrow I will figure out how to unfuck my life.
But right now, I’m standing in a closed-in space with a man who looks like a real-life rendition of Jason Momoa, and my panties are currently hosting their own episode of Celebration at the idea of standing just a little bit closer. I should be at the Baywater Country Club drinking top-shelf martinis and celebrating with Kylie and Bethany and Meaghan. But I can't see them tonight. For more than the obvious reasons.
I was planning on drinking myself stupid and forgetting everything about the last twenty-four hours in the human garbage fire that my life has become. It hurts and goddamn it, I'm tired of it hurting. I'm tired of being there for everyone else while I have to smile and look pretty.
Tonight? I thought I wanted the raw pulsing music and the bodies crushed together. I thought I wanted the contact. The distraction.
Don't make a fuss, Parker. Don't say anything to embarrass me, Parker.
What did you do to deserve it, Parker? Why didn’t you just do what he asked? Why do you always have to argue?
Anger crawls up my spine and squeezes my throat once more.
For once in my fucking life, I want someone to look at me and see me. Not my father's car, or my not-allowed-to-be-ex-boyfriend's tailored suits.
I want someone to see me. All of me.
I don’t know what I wanted when I left the apartment, but I think I may have just found it.
And the man standing next to me with the dark beard and dark eyes and terrifying tattoos seems like just the guy to take care of everything for a night.
Except that he might be a little too perceptive. I didn't plan on him seeing the bruises on my arm. Guess I need to rethink that career as a makeup artist if my graduate school plans don’t work out.
He's still watching me, a dark intensity in his eyes. An intensity that feels like a brushstroke over my skin.
I wonder what it would feel like to wake up wrapped in those massive arms, to feel those hands run over my skin while I sleep. What it feels like to be really touched instead of just positioned to receive.
My eyes burn, and I blink rapidly. I will not cry about the dumpster fire of my life and the garbage that surrounds me. I didn’t set out to solve anything tonight. I came out to escape. To try and find some release from the trapped air in my apartment.
Instead I think I’ve found a solution in search of a problem.
The Solution is a big man. Rough, too. The kind of man I would expect my father would call to lead the construction on a new project.
It’s his hands, though, that capture my attention. Big and flat and broad. They're a working man’s hands. Not polished. Not cupped in anger.
Just matter-of-fact hands. Hands that would be honest.
Hands that would feel like heaven on my skin.
I look up to find him watching me. I've never physically felt a look before this moment, this lazy caress of a man's gaze moving inch by inch over my skin.
I part my lips. Just enough that he notices. His nostrils flare.
"Careful, little girl." His voice is thick and deep and smooth. Like the gaze still trailing over my body.
"Or what?" I whisper. Kelsey’s voice slides through my brain.
This is foolish. Utterly stupid.
This is power.
And it is exactly what I need tonight. I need to feel needed. Wanted.
Tonight isn't about rational thought. It's about the opposite. About going in blind, completely on instinct.
"I'm not sure you want to find out."
But he has not moved away. He hasn't turned his back on me, and he hasn't dismissed me as some childish twat playing grownup.
God, but those words burn in my ears.
"Maybe I do."
The muscles in his neck bunch beneath the thick beard. "Do you always hit on random men at bars?"
I press my lips together and dare to take a single step closer. "Nope. You'd be my first."
He lifts one brow. "Oh yeah? What's the occasion?" He jerks his chin toward me. "It doesn't have to do with the bruises, does it?"
I lift my glass to my lips. Slowly I part them, letting the ice cube bounce off the tip of my tongue. When I lower it, his eyes are locked on my mouth. "No," I whisper. "It's got nothing to do with them."
Nothing and everything. But he doesn't need to know that. He only needs to take me some place and touch me.
Parker.
Me. I need him to see me.
He moves in then with a quickness that catches me off guard. In an instant, he is right there, right in my space. I can smell the faint, smoky scent of him. Something woodsy and spicy and smoky.
It's all I can do to stay still. To not back down from the challenge he presents in that single breath of space.
"What do you want?" His is a murmured question that feels like a demand.
The single word I need is lodged in my throat. It’s thick and heavy, filled with potential and promise.
"You," I finally say. 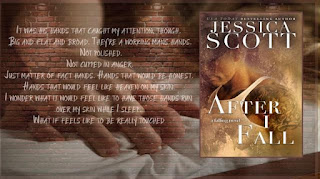 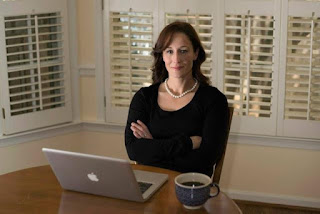 Jessica Scott is an Iraq war veteran, an active duty army officer and the USA Today bestselling author of novels set in the heart of America’s Army. She is the mother of two daughters, three cats and three dogs, and wife to a retired NCO.

She is the bestselling author of the Homefront series and the Falling series, both about soldiers and veterans adjusting to life after returning from the wars in Iraq & Afghanistan. Her bestselling Falling series features soldiers integrating into life on college campuses.

She's also written for the New York Times At War Blog, PBS Point of View Regarding War, and IAVA. She deployed to Iraq in 2009 as part of Operation Iraqi Freedom (OIF)/New Dawn and has had the honor of serving as a company commander at Fort Hood, Texas twice.

She's holds phd in morality in Sociology with Duke University and she's been featured as one of Esquire Magazine's Americans of the Year for 2012.
Jessica is also an active member of the Military Writers Guild.

Her debut novel Because of You launched the return of Random House's Loveswept digital imprint and launched the start of the ever popular contemporary military romance genre. 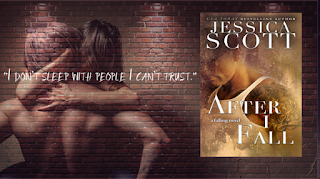