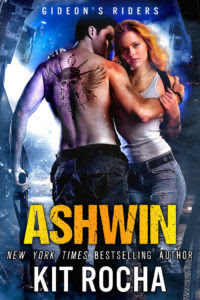 Lieutenant Ashwin Malhotra is a Makhai soldier--genetically engineered to be cold, ruthless. Unfeeling. His commanding officers consider him the perfect operative, and they're right. Now, he has a simple mission: to infiltrate Gideon's Riders, the infamous sect of holy warriors that protects the people of Sector One.

He's never failed to execute an objective, but there's one thing he didn't anticipate--running into Dr. Kora Bellamy, the only woman to ever break through his icy exterior.

When Kora fled her life as a military doctor for the Makhai Project, all she wanted was peace--a quiet life where she could heal the sick and injured. The royal Rios family welcomed her like a sister, but she could never forget Ashwin. His sudden reappearance is a second chance--if she can manage to touch his heart.

When the simmering tension between them finally ignites, Kora doesn't realize she's playing with fire. Because she's not just falling in love with a man who may not be able to love her back. Ashwin has too many secrets--and one of them could destroy her.

Ashwin is the first book in the Gideon's Riders series from Kit Rocha. This is a spin-off from the amazingly popular Beyond series and I honestly feel like readers who didn't read the Beyond series could pick up this series without being lost. There will be references to the war with Eden and the other sectors, but not so much new readers couldn't follow along in my opinion.

We met both Kora and Ashwin in the Beyond series and I was excited to see their book would be the first book in the Gideon's Riders series. Kora is a doctor who has mad skills and has saved so many lives thanks to her skills. Ashwin is a Makhai soldier, who was basically created by Eden to be an enforcer/killer. For some reason unknown to anyone else, Ashwin connected to Kora in a way no one could really explain, almost like an obsession. I think if the feelings were only one-sided, it would have been a no-go early on for me. However, Kora seemed to have just as strong a connection to Ashwin and I liked their connection grew stronger the longer they spent together.

I want to put it out there right now; Sector One is nothing like Sector Four. While there was a free love free for all in Sector Four (which I totally loved), Sector One is ruled by Gideon Rios and there are way more monogamous relationships. Gideon is seen as a God and his word is law. So when Gideon accepts Ashwin, everyone in the Sector accepts him right away.

I felt like Ashwin and Kora's relationship moved pretty slowly, but it also moved at the right pace for them. Ashwin had never been one to let anyone touch him and even in the beginning, it was hard for him to accept Kora's touch. Ashwin was also hard to get to know for me, which is why it took me some time to actually accept Kora and Ashwin as a couple. I did end of loving them both, but it was well into the book before I bought them as a couple.

I loved getting to meet all the other Riders in Ashwin. While the dynamics are very different in Sector One, I found myself connecting to many of the secondary characters and can't wait to get each of their stories. I felt like Ashwin was a great start to the new series and I look forward to seeing the growth of the series with each new book. 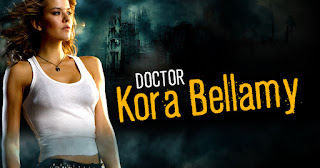 He moved slowly. Precisely. It was everything she’d ever known of Ashwin—his seriousness, his meticulous attention to detail—distilled into the gentle glide of his hands as they traced down her arms and over her sides.
He didn’t strip off her dress all at once. He took his time, gathering the soft blue fabric in his fists and coaxing it up inch by inch. It tickled over her skin, an unending caress that he dragged out until the breath she was holding escaped on a moan.
“I have a plan,” he murmured as the dress cleared her head, sending her tousled hair cascading around her face. Ashwin dropped the dress and smoothed the locks back from her cheeks, his fingertips lingering to caress the shell of her ear. “I formulated it when you came to me last night, but I’ve been revising and refining it all day.”
“All—” Her voice broke, and she swallowed—hard. “All day? Surely it’s not complicated enough to warrant that.”
“It’s not about being complicated.” He brushed glancing, maddening touches over her back and the line of her spine on his way to the clasp on her bra. One efficient twist of his fingers and the fabric went loose, one strap slipping from her shoulder. “It’s about being thorough. A man who wouldn’t be meticulous in devising the best way to give you pleasure is a man who doesn’t deserve to touch you.”
“Really?” Another moan built in her throat, and she released it on a shaky sigh. “I think figuring it all out should be part of the fun.” She touched his face, drawing a line from his cheekbone to the corner of his mouth, and smiled when he sucked in a breath. “See?”
Something dangerous burned in his eyes as he turned his head to nip at her fingers. It almost hurt, and the sensation zipped along her nerve endings like an electric shock.
She was trembling now, so she dropped her hand to his shoulder and pulled at the soft cotton of his shirt in silent demand.
He answered by lifting his arms.
Kora didn’t have his patience. She jerked at the fabric, and it caught on his chin and tangled around his arms. He helped her by stripping it away and letting it fall to the floor.
She’d seen him half naked more times than she could count. Most of their interactions had involved his partial nudity. It was different now that she was undressed, too, and that look in his eyes—
Kora slid her arms around him, traced the scratches she’d left on his shoulders the night before, then stepped back until her legs hit the edge of the mattress.
He followed her, looming over her for a dizzying moment before sinking to his knees. He smoothed his thumb over the edge of her simple black panties as his gaze drifted up to hers. “You’ve touched yourself before, haven’t you?”
The question surprised her—and it shouldn’t have. The fact that he wasn’t sure he could feel emotion had no bearing on his sexual experience. He’d mentioned other women, and he must have had domestic handlers.
He’d had sex before. Probably lots and lots of it. She was the inexperienced one here. “I have.”
“Show me.” He caught one of her hands and pressed it to her abdomen, her fingers spread wide beneath his. But instead of guiding her down, he slid their hands up. When she was cupping her breast, he let his touch fall away.
Her cheeks heated, but she didn’t look away as she squeezed her fingers together, pinching her nipple between them. She shivered at the sudden spike of pleasure, more intense because he was watching her so closely.
“You don’t mind it either, do you?” The sudden warmth of his breath on her abdomen kept her shivering. He soothed her with an open-mouthed kiss and the gentle brush of his tongue, so sweet she wasn’t ready for the sudden shock of his teeth closing on her skin. “A little bit of pain.”
Her voice failed her, so she shook her head.
“It’s all right.” He hooked his fingers under her panties and dragged them lower. His mouth followed, hot against her hip and so, so soft. “Sometimes pain is a warning. But like this, with someone you trust…” She anticipated the jolt this time, but she still swayed when his teeth sank into her skin. “It’s a different kind of sensation.”
Her knees would barely hold her. “Ashwin…” 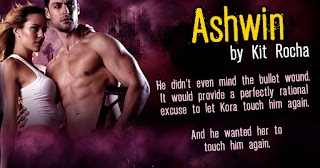