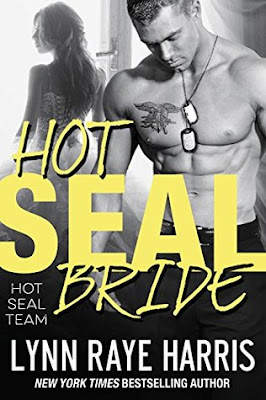 Sold to the highest bidder…

For the past fourteen years, Princess Antonella Rossi has been a virtual prisoner. She has no friends, no fun, and she’s not allowed to leave her aunt and uncle’s Virginia compound without an escort.

But today is her wedding day. A rich sheikh has bought her virginity, and with it her freedom. Any hope of independence Ella’s ever cherished will disappear the instant she faces him across the altar. With time running out and the wedding party gathering, Ella seizes the opportunity to run as far and fast as she can.

Navy SEAL Cash “Money” McQuaid isn’t looking for trouble, but trouble always seems to find him. This time trouble is five foot four and wearing a wedding dress. Rescuing a runaway princess has consequences though, and with his face plastered on the evening news and his career on the line, he realizes there’s only one way out of this mess—he has to marry her!

It’s a marriage in name only, just until he can clear his name and win Ella the freedom she seeks. But shacking up with a gorgeous virgin isn’t as easy as it seems, especially when the sparks snapping between them are hotter and more dangerous than anything Cash has ever experienced. By the time he realizes it’s too late to resist his virgin bride, an unseen enemy is intent on taking her away from him.

Cash is gonna need all his skills—and his friends on the Hostile Operations Team—in order to rescue his princess bride and give her the happily-ever-after she deserves.

The Hostile Operations Team is a covert military Black Ops unit. Their motto is Where None Dare. H.O.T. operators come from all branches of the military. The only criteria for membership: they must be the best of the best!

Let me just say right up front HOT SEAL Bride is one of my favorite books ever written by Lynn Raye Harris. Seriously, I read every single chance I had as soon as it hit my kindle. I've loved Cash "Money" McQuaid since he first appeared on the page and was so glad to see him get his story.

I think part of why I couldn't wait for Cash to meet the woman who was his match was because he gave all the other guys such a hard time when they fell in love and always said it would never happen to him. Enter Princess Antonella Rossi and all bets were off. I loved Ella from the moment she appeared on the page. She was such a dichotomy of innocence and sexiness. She has been basically kept hostage by her aunt and uncle since her parents were killed and hasn't been allowed to be around others and her education was limited to what her aunt and uncle allowed. Yet part of her education came from her aunt showing her porn to prepare her for the wedding night for her arranged marriage with the sheikh her family had basically sold her to. Luckily, when she runs away, Cash is the man to appear to help her escape from her family.

I loved Cash and Ella together pretty much from the moment they met. I really think they both started falling for one another right away, even if Ella promised she wouldn't fall for him and Cash promised he would never fall for anyone. I felt an instant connection between Cash and Ella. Yes it started out as a friendship, but it was quickly obvious how attracted they were to one another. I loved how much honor Cash had when it came to keeping his hands off Ella so she could save her virginity for her husband and adored just as much Ella driving him crazy trying to rid herself of said virginity. All I can say is when they finally got together the screen on my kindle fogged up it was so freaking hot! I knew Cash would freak out at some point about his growing feelings for Ella and he didn't disappoint me. He also made amends in a huge way. Only made me fall a little bit more in love with Cash to see him finally fall in love.

Honestly the only thing I didn't love about his book was Ella's family. Her aunt and uncle were pretty much reprehensible and I wanted to smack them around so many times for how they treated Ella and how they lied to Ella. I love the Ella instantly became family to all the HOT members on Cash's team and she finally had people in her life that cared for her.

HOT SEAL Bride is another winner in the HOT SEAL Team series. I've loved each and every book in the HOT and HOT SEAL series and drop everything to read each new installment as soon as they hit my kindle. Lynn Raye Harris has defiantly found her true voice with these stories.

Posted by mslizalou at Wednesday, January 17, 2018