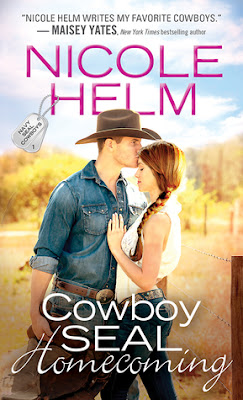 Three former Navy SEALs
Injured in the line of duty
Desperate for a new beginning…
Searching for a place to call their own.

Alex Maguire never thought he'd go home again. The perfect soldier, the perfect leader, he's spent his whole life running away from Blue Valley, Montana—but when a tragic accident bounces him and two of his men out of the SEALs, there's nowhere left to turn but the ranch he used to call his own…and the confusing, innocently beguiling woman who now lives there.

Becca Denton's like nothing he could have imagined. She's far too tempting for her own good, but when she offers to help turn the ranch into a haven for injured veterans, he can't exactly say no. He'll just need to keep his distance. But something in her big green eyes makes Alex want to set aside the mantle of the perfect soldier and discover the man he could have been…safe and whole within the shelter of her arms.

The Prodigal SEAL has come home.

NICOLE HELM writes down-to-earth contemporary romance specializing in people who don’t live close enough to neighbors for them to be a problem. When she’s not writing, she spends her time dreaming about someday owning a barn. She lives with her husband and two young sons in O’Fallon, Missouri.

Alex remained frozen in place and Becca didn’t know how to let go of him. How to step away. Even when he’d ordered her not to kiss him, she didn’t know how to walk away.
Because he hadn’t answered her question. Not fully. If he’d only tell her that…that all he cared about was her well-being and safety. That this had nothing to do with the attraction she felt, then she would give this up. She would go back inside and sit with Mac and know that nothing with Alex was ever going to happen.
But he had to tell her. She needed to hear it from his lips to really be able to give it up.
He lifted the hand that had been hanging at his side and curled his long, blunt fingers around her elbow. He removed her arm from around him, but as he pulled her arm off and released her elbow, his fingers trailed—probably accidentally—down her forearm.
It jittered through her, like nerves and electrical shocks. Something swirling low in her stomach, sparks rioting in her chest.
His breath hitched, but his gaze didn’t meet hers as he pulled her other arm from around him.
“I don’t know what you’re trying to get at. I don’t know what other reason there could be.”
But he didn’t look at her, which was so weird. Alex always looked her in the eye.
“You’re lying.” Which she hadn’t meant to say out loud, but it was such a surprise to see it. To read him so well and so easily. “You’re really bad at it.”
His gaze finally met hers, and that she couldn’t read, whatever war was going on in his dark depths.
“Maybe you think I’m lying because that’s what you want.”
Which was true, but there was too much lining up to her way of thinking. He’d brought up not sleeping together this morning. Jack’s words—as drunken as they might have been—the whole not looking her in the eye and shuddering when they touched.
“Okay, that is what I want.”
She could tell she’d surprised him. That he’d expected her denial or maybe her to stutter and scamper away, but she wasn’t going to do that. “I’m attracted to you. Yup. Not going to deny it. You’re hot. You’re a good person—such a good guy, even when you’re annoying the piss out of me. I feel comfortable around you in a way I don’t with a whole heck of a lot of people. So, yeah, I’m not going to stand here and try to deny it, because I am not a coward—but you are.”
The shock written all over his face sharpened. “Excuse me?” he said, dangerously calm.
Clearly the word coward got under his skin. But that’s what he was being. Hiding behind lies and whatever else. It was cowardly. She should know. She was always a coward when it came to people.
Well, not anymore.
“I said you’re a coward,” she replied, giving a shrug she wished felt a little more nonchalant. “You won’t admit you feel exactly the same way. Because you’re afraid. Or is that for my protection too?”
He took a deep breath, clearly trying to find some calm, but his eyes were furious and his jaw was so tight it was a wonder it didn’t crack in half. Everything about him vibrated with anger, and she felt powerful.
Her. Becca Denton. She felt in charge and right. Not a doubt or a second of uncertainty.
“A coward, huh?” he finally muttered through gritted teeth, one of his hands flexing into a fist and then open again.
“Yes. A big ole fraidy-cat over the fact that you’ve got some feelings for your much younger step—” But before she could get the remaining words out of her mouth, he used the front of her shirt to jerk her against the hard wall of his much larger body. She was too shocked to jump back or fend it off, and even though nerves slammed through her, well, she liked being this close. Not just hugging close, but pressing close.
Then his mouth crushed against hers, hard and unrelenting, and whatever powerful feeling she’d had evaporated on the spot. Incinerated completely. She didn’t even have time to think about how she didn’t know how to do this. His hands were in her hair, her hair, tangling and moving her head whichever darn way he pleased.
She grabbed for purchase, a little afraid her knees were wobbly, holding on for dear life. Letting his lips and tongue lead hers, guide hers.
It was fire and it was shock and it was good. It was good to be hollowed out and feel as though she was filled with liquid gold. Shimmering and lazy. To be pressed up against nothing but hard muscle and skilled mouth and know not a thing could touch her here.
Not a thing but him.
“Christ, we can’t do this,” he muttered, but it was against her mouth, his arms banded around her so that whether they could or not, they certainly were.
She wanted to keep doing it. Experiencing it. Participate instead of just letting it happen and soak it up—which was good, oh it was good, but she wanted more. 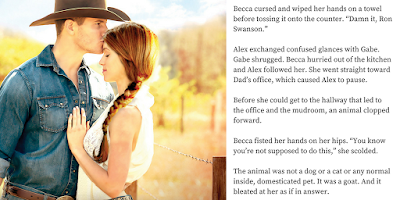 Rafflecopter Giveaway
Enter to win a copy of Outlaw Cowboy by Nicole Helm!