I never knew when he’d come to me. Only that he would.


I’d never even kissed a boy the night I met Stone. The night I saw him kill. The night he spared my life. That was only the beginning.


He turns up in my car again and again, dangerous and full of raw power. “Drive,” he tells me, and I have no choice. He’s a criminal with burning green eyes, invading my life and my dreams.


The police say he’s dangerously obsessed with me, but I’m the one who can’t stop thinking about him. Maybe it’s wrong to let him touch me. Maybe it’s wrong to touch him back. Maybe these twisted dates need to stop. Except he feels like the only real thing in my world of designer labels and mansions.


So I drive us under threat, until it’s hard to remember I don’t want to be there.


Until it’s too late to turn back.


HOSTAGE is a dangerous standalone romance by New York Times bestselling authors Skye Warren and Annika Martin. It’s set in the same world as PRISONER, but can read separately! 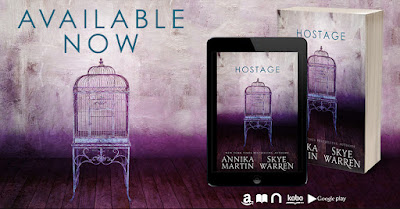 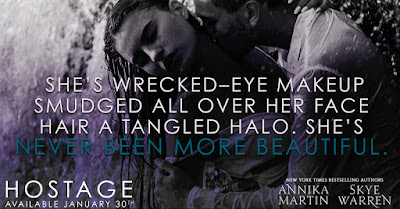 
Skye Warren is the New York Times bestselling author of dangerous romance such as the Endgame trilogy. Her books have been featured in Jezebel, Buzzfeed, USA Today Happily Ever After, Glamour, and Elle Magazine. She makes her home in Texas with her loving family, sweet dogs, and evil cat.


Annika Martin loves fun, dirty stories, hot heroes, and wild, dramatic everything. She enjoys hanging out in Minneapolis coffee shops with her writer husband, and also likes birdwatching at her bird feeder alongside her two stunningly photogenic cats, especially when she should be writing. She’s heavy into running, music, saving the planet, taking long baths, and consuming chocolate suckers. She’s worked a surprisingly large number of waitressing jobs, and has also worked in a plastics factory and the advertising trenches; her garden is total bee-friendly madness and her most unfavorite word is nosh or possibly fob. A NYT bestselling author, she has also written as RITA award-winning author Carolyn Crane.