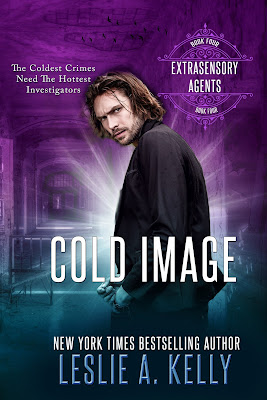 Derek Monahan sees violent death wherever he turns. His strange ability forces him to watch crimes that repeat in loops of blood and anguish. The only positive is that he is able to use his power to solve cold crimes...like the disappearances of boys from a secretive academy.

Dr. Kate Lincoln hates that her kid brother was sent to an awful school in Georgia. The place is a nightmare--housed in what was once a brutal asylum. Now her brother has disappeared, and she's the only one who seems to care.

Derek wants to help the beautiful doctor, but going undercover in a place that seethes with ancient violence isn't easy. When she sees just how much his job affects him, Kate realizes she wants to be the one to help heal the wounds of this strong, noble, and very sexy man.

As long as she survives to do it.

Excerpt from COLD IMAGE by Leslie A. Kelly