I’ve been a fan of Carly Phillips for years. I’m not sure I had read her Harlequin books when they were originally released, but I remember reading The Bachelor when it was picked for the “Reading by Ripa” book of the month in 2002. I’ve gone back and read all of Carly’s backlist and have never missed a release since The Bachelor. Her Serendipity and Serendipity’s Finest series are 2 of my favorite series from her. I fell hard for the Barron brothers (especially Dare) from the very first book and love we continue to get to see them over the course of both series.

***Carly has been nice enough to offer one (1) copy of any of her currently released Serendipity books to one lucky winner. Please comment and include your email to be entered. Any format is available. Will include all comments from 11/4 to 11/8.*** Faith Harrington was the classic girl of privilege--until her father was convicted of running a Ponzi scheme and then her marriage crashed and burned.

Now Faith is back in her hometown, hoping for a fresh start. But her father's betrayal has rocked Serendipity - and not everyone is ready to welcome her with open arms. Then she runs into her teenage crush – the dark, brooding Ethan Barron. Ethan, no stranger to scandal himself, never imagined he'd own the mansion on the hill, much less ever again
come face to face with Faith--the princess he once kissed senseless. The chance meeting reignites the electric charge between them.

Still, when Ethan hires her to redecorate what was once her childhood home, Faith is sure that getting involved with the town's notorious bad boy will only lead to trouble. But her heart has other ideas. And so do the townspeople of Serendipity ... 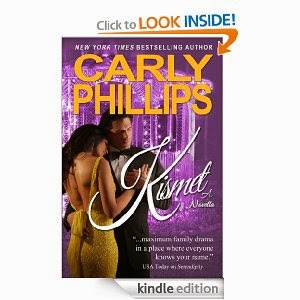 Elisabetta Gardelli thought she’d spend her days serving coffee and writing obits for the town paper until an unexpected opportunity results in her dream job as a journalist. Now, divorced and determined to make it on her own, Lissa is hired to do a series of interviews about entrepreneurs who’ve made their mark at an impressively young age. First up? Wall Street mogul Trevor Dane — Lissa’s first love. Lissa hasn’t seen Trevor since he left the small town of Serendipity to earn his spot on the right side of the tracks. Ten years have passed but neither has really moved from their super-passionate teenage affair – or the heartbreak that followed. This reunion can be their second chance or it can provide much needed closure. It all depends on Trevor. Can he forgive Lissa or will the past continue to stand in their way?

*can be read alone - for Serendipity readers- this novella takes place between Serendipity and Destiny. 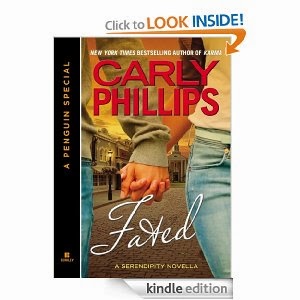 This novella takes place between Serendipity and Destiny.
Kate Andews is the original rebound girl. But she has had enough and has vowed to never be someone’s second choice again. Unfortunately, her undeniably intense desire for Nick Mancini is testing her best laid plans because Kate has carried a torch for Nick since high school– but she’s always been permanently in the friend zone.
Lately, Nick has definitely noticed Kate. Unfortunately he can’t get her to take him seriously. He knows he’s made some stupid moves in the past but he’s determined to get Kate to act on their obvious and mutual attraction. However Kate’s stubborn and she’s been hurt before, which means Nick will have to pull out all the stops in order to convince her he’s not the same boy she used to know, and she’s not second best… she’s everything. 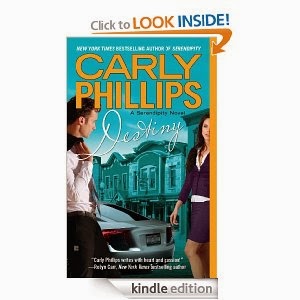 Nash Barron may be cynical about love, yet even he likes a good wedding. But the only good thing about his brother’s wedding is Kelly Moss. Nash can’t help but admire her confidence and beauty, but he’s forced to keep his distance because getting involved with Kelly could destroy his relationship with his newly discovered half sister, Tess…
Kelly came to Serendipity to give Tess–her half sibling as well, thanks to an illicit affair–a second chance at life. She learned long ago not to rely on anyone but herself. Besides, she doesn’t want to upset Tess’s life by pushing for a fling with Nash. Except the more she gets to know him, the more vulnerable she becomes to the kindness beneath his gruff exterior, and the less she’s able to stay away. But she has other reasons for keeping her distance. Like the secret from her past she knows Nash will never forgive… 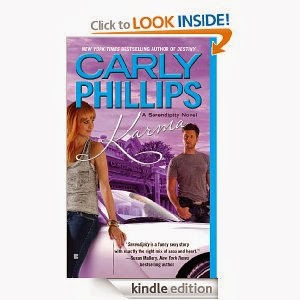 Police Officer Dare Barron has had a crush on Liza McKnight ever since he was a teenager. But despite his lifelong attraction, the closest he’s ever come to interacting with her is watching Liza regularly bail out her brother at the station.

Dare’s dark past with Liza’s brother, Brian, has always kept him from pursuing her. But suddenly Liza finds herself in need of protection and Dare appoints himself as the man for the job.  And while the sizzling attraction between Dare and Liza draws them together, the past that Dare and Brian share threatens to keep the two apart forever. 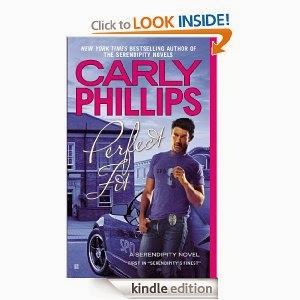 MIKE
Always feeling like the odd man out in his family, Michael Marsden wanted to make it on his own. So he escaped Serendipity to become an undercover cop in Manhattan, where the Marsden name wasn't known. But Michael's independence is compromised when he returns home to replace his sick father as chief of police. Back in the shadow of his family, he's as lost and restless as ever, until he's challenged by someone he never anticipated.

CARA
Cara Hartley is the Serendipity cop with whom Mike had a one night stand three months earlier. Neither expected anything more but fate has other things in store. When Mike returns as Cara's boss, the sexual tension between them is impossible to ignore - and the unexpected emotional connection continues to grow. But Cara's a small town girl while Mike has a wanderer's blood in his veins.

Together their chemistry explodes but ...
Both are convinced a future together is impossible. Until Mike's real father's secrets come back to haunt him and he realizes there are some things worth staying and fighting for. Including Cara. 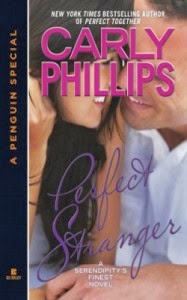 Carly Phillips takes you back to the town of Serendipity, where overworked Alexa has an instant connection with a sinfully sexy football star on the dance floor. A one-night stand evolves into multiple nights when Luke decides to teach the good doctor about his own brand of fun. But when it’s time for him to leave town, will these “Perfect Strangers” be able to say goodbye for good? 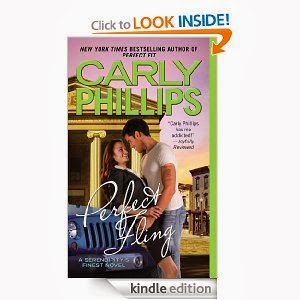 Erin ... The Good Girl
Assistant District Attorney, Erin Marsden,is Serendipity's quintessential good girl.  The only daughter of the ex-police chief, she has never made a misstep, content with her quiet, predictable life ... or so she thinks.  Until Cole Sanders returns to town with heated interest in his eyes and shadows in his past.

Cole ... The Bad Boy
After seven years of deep under cover work in New York City, Cole returns to Serendipity to help his aging father and to find his moral compass once more. Not to get involved with wholesome Erin Marsden.  Even as a rebellious teen, he knew a girl like Erin was off limits and that hasn't changed.  But neither one of them can resist their off-the-charts chemistry and a one night stand brings complications neither Erin nor Cole expected.

The Attraction ... Off the Charts!
Then Erin's current case plunges her into a killer's crosshairs. With more at stake than anyone knows, Erin succumbs to Cole's take-charge attitude. As a bodyguard, he's the best. As a lover, he's even better. But there's more than the matter of Erin's safety at stake.  And Cole must forgive the sins of his past and prove to himself - and to Erin - that he's capable of the love and the forever she - and their baby - desperately need. 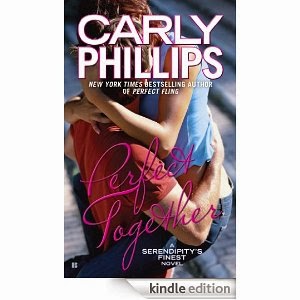 In the picturesque town of Serendipity, New York, three siblings have grown up in the shadow of their proud and respected police chief father. But what do love, fate, and fortune have in store for the next generation of Serendipity’s finest?

Tired of being the easygoing daughter, always ignored in favor of her high-maintenance sister, and no longer interested in being her fiancé’s trophy wife, Nicole Farnsworth calls off her wedding. All she wants is to be herself. And where better to find her destiny than Serendipity? The place where she met the one man who made her heart beat faster, and gave her the courage to reinvent her life—even if he doesn’t know it.

Officer Sam Marsden calls Serendipity home and he loves it there—even though his childhood sweetheart was stolen by his best friend. After such heartbreak, Sam fears he can’t trust his instincts when it comes to love. Yet he’s so tempted by Nicole, a woman he met only briefly but who has starred in his dreams ever since. For Nicole and Sam, opening their hearts one more time could change their lives forever. But who’ll be the first to take that chance?
Posted by mslizalou at Monday, November 04, 2013

Love this series! My favorite is Perfect Fling!! My e-mail if I'm chosen is lesleylindsey@hotmail.com.

Serendipity as the starter of the series, but I've loved all her books! girlygirlhoosier52 at yahoo dot com.

Oh, I love this series, I would love to win. I just realized that I think I missed one, Perfect Stranger. I need it now...my email is lsscarchuk@att.net

I love her books. My e-mail is kikina88os@net.hr

Love Carly's books
missed a couple and they're now on my list
if chosen: email: terrysoo2001@yahoo.com

I love al of her books. I have most of them but I don't have perfect together. Coupon_momma75@yahoo.com

Yay! I've been so busy with school over the last few years that all I've read are stacks of textbooks. I've missed this entire series and can't wait to read them now that I have more time! Thanks for these great recaps to get me started! (askmsboyd at gmail.com)

I have most of Carly's books but there are a couple I've missed.
tmjoy922@yahoo.com

Love all your books! Can hardly wait for the next one.

I have been a Die Hard fan for as many years as she has been writing, but I fell in love with Serendipity, would love to live in a place like that, with hotties like that!!

Love Carly's books...Just started reading her books...I can't wait for the next book Perfect Together comes out....
And her new series...Dare to love...

Serendipity I want to read next, I love Carly's books. I have read a lot of her books and have loved them all.