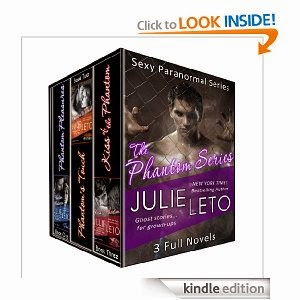 I’ve been a fan of Julie Leto’s for years. I’m pretty sure I own every book she has written in print and have ben slowly building my digital library as well. While I love my print books on my keeper shelf, I really do tend to read almost exclusively on my kindle now. I really can’t pick just one favorite series by Julie Leto to spotlight, so I’m picking one of my favorites to feature this week. I love her Phantom series so much! I have all the original books in print and also have each of the books on my kindle.  There are currently 3 books out in the Phantom series. 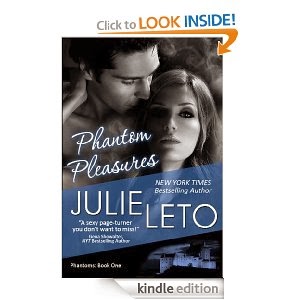 When hotshot hotel developer Alexa Chandler finally finds the perfect property for her next luxury resort, she has no idea of the black magic she’s about to unleash. Thanks to vivid tales from the locals, no one has breached the shores of the mysterious island or entered the abandoned castle that is its centerpiece in recent memory. But once inside, Alexa discovers another mystery—the portrait of a dark and brooding nobleman.
With a single touch, Alexa unleashes a phantom who has been trapped within the canvas for over two hundred years.
Contained by a gypsy curse, Damon Forsyth has had centuries to think of nothing but revenge and retribution until intense desire draws the beautiful Alexa to his lair. Though free of the painting, he is still bound to the castle. Only by using the dark magic that enslaves him can he initiate a game of seduction that will end with his freedom—and her undoing.
Unable to resist, Alexa surrenders to Damon’s ghostly touch. But will she thwart the magic that holds Damon in thrall…or sacrifice her own mortality in the name of love? 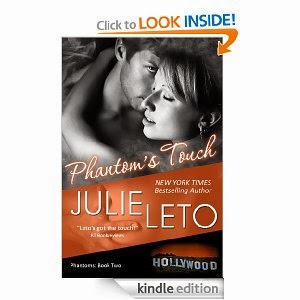 Silver-screen action heroine, Lauren Cole, has one more film to make before she’s free from her producer ex-husband, a smothering role, and a life she wants to leave behind. There’s only one thing she wants from that life: the antique sword her husband promised her in the divorce. So she steals it. Holding the weapon for the first time, she unleashes a magic that rivals Tinsel Town special effects—and makes her wonder if she has truly lost her mind.
In 1747, Aiden Forsyth stormed a gypsy camp and fell captive to a powerful curse that has held him within the sword for more than two centuries. Lauren’s touch releases him, but his liberation has limits. Corporeal only during the night, he remains bound by a dark and dangerous magic in the light of day—complicating his vow to protect the woman who holds the key to his ultimate freedom.
So the sexy warrior who haunts her days and inflames her nights must stay intimately close, especially after they learn that the madman trying to kill Lauren has ties to the very curse that has entrapped Aiden’s soul… 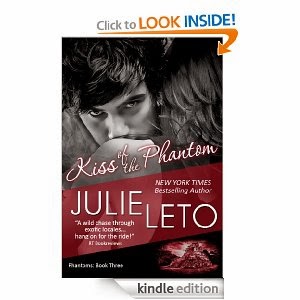 Kiss of the Phantom ~ Book 3

After rogue archeologist Mariah Hunter dumps a cache of ancient Mayan coins in the Mexican jungle, she ends up with a bounty on her head and needs a quick cash infusion to cover the debt. So when she hears that a priceless stone is up for grabs in a remote region of Germany, she scrambles to reach it before her rivals.
Nearly three hundred years ago, in a futile attempt to rescue his family from a mercenary horde, Rafe Forsyth springs an evil trap that keeps him captive within a hidden stone. Alone with his grief and rage for centuries, he is unprepared for the rush of attraction he feels for the beautiful adventurer who liberates his body…but can she save his soul?
Together, Rafe and Mariah race against time to recover the stolen coins and discover the means to free Rafe from the curse’s evil magic. Because until the curse is broken, the Gypsy’s kiss is the truest danger of all…

Buy Link for the Boxed Set from Amazon: