I feel like I’ve known Heather Lire forever, since we have talked online about books for what seems like years. I’ve always considered Heather a friend and even more so after being roomies at RWA in Atlanta. We had the best time together! I’ve also been lucky enough to get each of her Holiday Vermont books early for review and I’m a huge fan of her writing. As soon as I finish one book I’m texting or emailing asking for the next in the series. 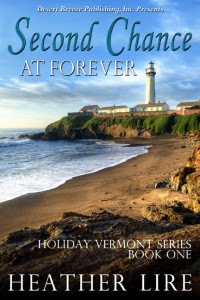 When Morgan Sanderson left her grandparent’s anniversary party, she had no idea how much the previous week would impact her life. Four years later she's living a content life, teaching literature and being the best mom she can be, even if she knows something is missing. That thing being the one person she can’t forgive and yet can’t get over.

The week Ryan Cartwright spent with Morgan was the best week of his life until tragedy struck, one that changed his life completely. Four years later he discovers he’s has three year old twins with Morgan the one woman he’s never been able to forget and let go. Can he forgive her from keeping the knowledge of his son’s from him.

As they uncover the truth behind their separation, they discover the love they've always felt for each other is still there, but can they ever trust each other again. 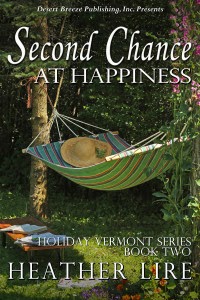 When Colin MacCaffe's personal life comes crashing down around him, he leaves the big city behind for a fresh start in the small town of Holiday Vermont. As the Deputy Chief of Police he spends his time making sure the town he's come to call his own is safe. The only problem in his peaceful life is the arrival of his next door neighbor's sister. A woman who threatens to destroy the peace of his new life.

After years of putting one foot in front of the other, acting like she was fine for her family Brynn Sanderson - Jackson is mentally, physically, and emotionally exhausted. All she wants is a couple of weeks of rest and relaxation while she house sits for her sister. What she gets instead is a trip to the hospital, emergency surgery, and the neighbor next door. A man who makes her feel more than she wants to.

Can these two put their past heartaches behind them, and go after the happiness they've always wanted and thought was forever lost to them? 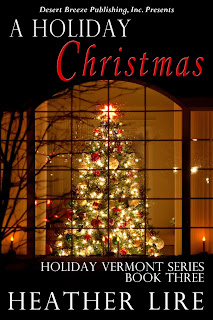 There’s magic in the air this Christmas Season in Holiday.

Averie Baldwin wants nothing to do with men. But her family and friends are determined she won’t spend her first Christmas back in Holiday, Vermont alone. So far she’s managed to avoid all their attempts to set her up on dates. Until she’s chosen to represent the school district in the town’s annual Christmas play…with the sexiest man she’s ever seen.

Corey Evans has a job he loves, great friends and a loving, if interfering family, but something is missing. When Averie shows back up in town he knows exactly what he needs in his life. Her. Getting to know her however has proven difficult, until they are thrown together on the annual Christmas play.

I'm a really big fan of Heather Lire's Holiday, Vermont series. I was lucky enough to be given an ARC from the author with the promise of an honest review.

A Holiday Christmas is a novella length story, where I got to visit with some of my favorite characters and meet new favorites. I have to say Averie and Corey both pretty much stole my heart from the very beginning. Their romance was both sweet and sexy. I loved they found strength to deal with all that life threw at them from one another.

A Holiday Christmas is the perfect read to help get readers in the mood for Christmas. I've come to expect beautifully written stories from Ms. Lire, and she totally delivered once again.
Posted by mslizalou at Monday, November 11, 2013