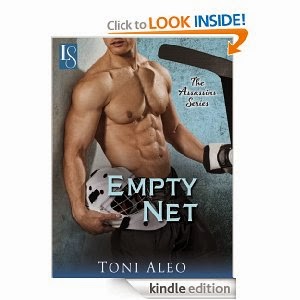 Empty Net is the third book in the Nashville Assassins series from Toni Aleo. The publisher is Random House Loveswept and the release date was April 23, 2013.

In Toni Aleo’s third novel in her hot Assassins series, the chiseled men of this Nashville hockey team can make anything happen when they go all out for the women they want—even turn a one-night stand into a happily ever after. Audrey Parker is up against the boards. She’s stuck in a job she hates and pining for a total jerk. Meanwhile, her sister Fallon is moving out and getting married to hockey star Lucas Brooks. Where is Audrey’s Prince Charming? Nothing she does has ever seemed to be good enough for any of the men in her life. Audrey’s about to hit rock bottom . . . until she wakes up next to Tate Odder. The thrill of moving up from the minors to the Nashville Assassins was a welcome distraction. But not even becoming the first rookie goalie to tally three shutouts in the Stanley Cup finals alleviates the pain. With the loss of his parents and sister weighing as heavily on his soul as ever, Tate Odder can’t keep pretending he’s okay. That’s when he meets smart, sexy Audrey. Her gentle warmth and quirky sense of humor make him feel whole for the first time in too long. But to stay that way forever, Tate must find a way to accept his past and learn to live for love.

I'm a really big fan of Toni Aleo's Assassins series. Even though I don't understand everything in hockey, I love to watch it being played. Bonus for me, it takes place in my home city of Nashville.

I really enjoyed Empty Net and look forward to reading many more books in this series. I loved Tate Odder and thought he was a hottie from the very beginning. I liked Audrey both in this book and past books, but couldn't understand why she kept going back to Levi when he treated her so horribly. I wanted to punch him in the junk multiple times. I really wish she had listened to her brother-in-law Lucas sooner. That being said, I loved the romance between Tate and Audrey, even with the age difference. Personally I didn't see it as that big a deal, but could understand why Audrey thought it was a big deal in the beginning.

Tate and Audrey are a really great couple and I loved they were able to work through even the biggest of issues, even while making mistakes. I have to say I fell more in love with Tate (if possible) when he beat the holy crap out of Levi. Will say that part of the book had me wanting to punch someone while bawling my eyes out crying.

I loved the chemistry between Tate and Audrey. They are attracted to each other from their very first meeting in a bar. I love that Tate really courted Audrey and was initially willing to be just friends to keep her in his life. However, the chemistry between them was way too strong to resist and their love making was super hot. Must say I've actually come to expect many sexy scenes from Ms. Aleo and her Nashville Assassins books.