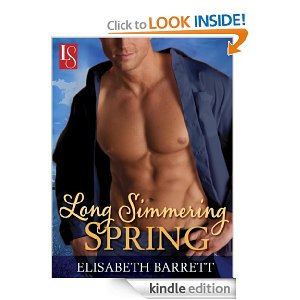 Spring comes to Star Harbor, bringing unexpected passion for a sexy sheriff, as the next Grayson brother finds love with the town’s beautiful doctor.

Julie Kensington grew up in the same small town as the Grayson brothers and remembers when the boys were nothing but trouble. As teenagers, Cole’s rugged sex appeal set Julie’s heart ablaze, but she did her best to ignore it. Now a grown woman with a medical degree, Julie still can’t resist her searing attraction to the roughest, toughest Grayson. He’s ex-military, tormented, and sexier than ever, but are his wounds too deep to be healed by her loving, gentle touch?

Even back in high school, straight-arrow Julie had a way of making Cole think twice about his bad-boy lifestyle. When Julie decides she’s finally ready to embrace her wild side, Cole knows he is just the man to show her the way, unleashing years of pent-up desire. Neither of them counted on falling in love, but when Cole’s demons threaten to derail their relationship, it’s up to Julie to show him that together, they can overcome the past . . . and build a future.

I was lucky enough to get a review copy from NetGalley thanks to the publisher. I love those Grayson brothers and was really excited to get Cole’s story.

I really loved Cole from the very beginning. I think the fact that he was still dealing with PTSD from fighting for our country only made me wanted him to find happiness even more. Enter Julie Kensington, who also grew up in Star Harbor and still remembered Cole as a wild teen. Julie was attracted to Cole when they were in high school, but would never have given the bad boy a chance back then.

Julie and Cole start the relationship pretty slowly, even though the chemistry is off the charts between them. Julie initially only is looking for fun, but after she and Cole make love for the first time, she realizes there is much more to their relationship than just fun. I love that Cole knew way before Julie that he loved her, and even was the first to say it. Of course, even true love doesn’t stop a huge mistake from putting their long-term relationship in jeopardy. While Cole messes up in a huge way, he also steps up in a huge way to make things right.

The on-going investigation into the drug dealing problem in Star Harbor runs through this book as it did in the first 2 stories. I’m looking forward to learning who is ultimately behind all of it in Val’s book, Slow Summer Burn, which is currently set for release on August 12, 2013.
Posted by mslizalou at Thursday, May 16, 2013