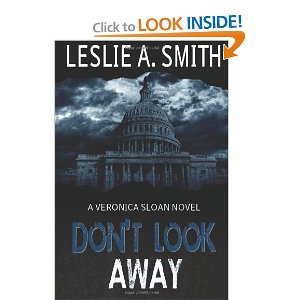 She can do it all and I'm so excited about her new venture into publishing. I'm so hoping all goes well so I not only get more Veronica Sloan books, but we also get more Black CATs and Extrasensory Agents books.

As you might know, although DON’T LOOK AWAY is my first book published as Leslie A. Smith, I have written a lot of books under two other names. Like, about fifty. My Leslie Kelly romances are usually funny and sexy. My Leslie Parrish romantic suspense novels were dark and edgy. And now here comes Leslie A. Smith.

You might be wondering why—why a new series, why a new name, why a new genre (these books lean much closer to straight thriller than romantic suspense.)

The truth is, I started writing DON’T LOOK AWAY in 2005. Long before there was a Leslie Parrish or any Black CATs or Extrasensory Agents, there was Detective Veronica Sloan and her dark, dangerous, futuristic world.

Up until that point, I’d only ever written romances, from “series” books for Harlequin Temptation and Blaze, to “single title contemporaries” for HQN. But throughout all those years of writing, what I enjoyed reading the most was dark suspense. Thrillers, even horror. And I knew I would someday want to write it.

Then one night, I had a dream. I was on a Metro train in Washington D.C.—I’d grown up outside of the city, though I was at that time living in Florida. In my dream, I came up the escalator and emerged into a city that had been utterly decimated. The Spirit of St. Louis was lying in pieces in the reflecting pool, the Air & Space Museum having been reduced to rubble. So had the White House, the memorials, most of the Smithsonian buildings. I knew terrorists had wiped out the nation’s capital, and as I stood at the top of the escalator, these men came bursting up from behind me, saying they’d launched the attacks from the Metro train system that runs beneath the city.

I had to write it. HAD to write it. So I wrote down my dream, and then I began playing with the whole thing. Who had I been, what character had come up out of that escalator? What was her world like? Who had she lost in the attacks? And what direction would the country go in now?

That’s how Veronica Sloan was born. I developed a heroine who’d been forged in the fire of the destruction of her hometown. Who’d lost a father and two brothers and so many friends. Who’d hardened into a steel rod of determination when it came to stopping crimes, or at the very least solving them.

Then I flashed forward five years. What was Veronica—Ronnie—doing now? What was the country like? What about the rest of the world?

Those answers came so easily. Ronnie created herself and every piece of the story flowed out of her. Her view of the world is the one the reader shares, her pain and her heartbreak and her excitement all bring the series to life.

Believe me, I was absolutely thrilled with this book. But publishers…not so much. The proposal for DON’T LOOK AWAY made the rounds in New York and had lots of, “Wow, that’s interesting,” but no offers. So my agent suggested I try something else, a straight romantic suspense without the futuristic element. I did, and nine days after the proposal went out, we had an offer from NAL. That was for the Black CATs series. They went on to publish Extrasensory Agents. Although both series got wonderful reviews and terrific responses from readers, they just didn’t sell well so the publisher declined to publish any more.

Throughout all of that, I never forgot about Ronnie, or her partner Mark Daniels, or her nemesis/hero Jeremy Sykes. So when a German publisher who’d put out the Black CATs series asked if I had any other projects, I had a foreign agent send them DON’T LOOK AWAY. They bought it and began publishing it in Germany late last year.

With the huge success of indie publishing—including my own success with some old Leslie Kelly titles I’d never sold—I decided to go that route in the U.S. I actually had offers from a couple of U.S. publishers, but turned them down in favor of doing it all myself. I wanted control over the content, the story, the editing, the cover, the pricing, the distribution.

It had taken eight years…but that dream of coming up out of that escalator finally culminated in a published novel.

I couldn’t be more thrilled with how DON’T LOOK AWAY, and the sequel, DON’T EVER STOP, turned out. Readers who liked my Parrish books will almost certainly like them, as should anyone who likes dark suspense or thrillers.

I so hope the books do well under this new name. I am also hoping to get the rights back to my other two series because I’d really like to re-launch both the Black CATs and the Extrasensory Agents under this new pseudonym and write new installments of each. That’s the plan, anyway…here’s hoping it all works out!

I'm including the back cover blurb for Don't Look Away as well as buy links for both Amazon and B&N to make it easier for everyone to order their own copy of this amazing book.

CAN A MURDER VICTIM'S OWN MEMORIES BE USED TO SOLVE A CRIME?

Detective Veronica Sloan isn’t shocked by much. Having lived through the worst terrorist attacks in history—which destroyed much of Washington, D.C.—she’s immune to even the most vicious brutality. But even she is stunned by the discovery of a murder in the basement of the under-reconstruction White House.

Sloan and FBI Agent Jeremy Sykes have been assigned to investigate the homicide because the victim was a participant in a top-secret experiment. Veronica has been training for just this kind of case, waiting to use her special skills, anxious to learn if a recording device implanted in a victim’s head can help solve their murder….before the killer strikes again.

Sorry to be so late to respond. I marked it to come back to and I'm just now getting "back." LOL

Les? I. LOVE. THIS. BOOK. I love the premise, the characters, the action, All of it. And I think you are so smart to keep control. I'm going to do the same with my urban fantasy series for the same reasons--but without the German offer.

Keeping my fingers crossed for getting your rights back. You go, girl!!!

Thank you so much Silver! I really really appreciate it. It is a little scary, going it alone, but I am very hopeful and am glad I gave it a shot. I won't deny having the German "safety net" was a BIG plus. I don't know if I could have afforded to take the time out of my other paid writing to write these books if I hadn't had that.