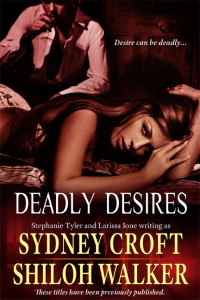 Ten years ago, former Army Ranger Ethan Raintree made one hell of choice…keep on lying, or tell the woman he loved the truth. He decided to tell the truth, and she threw him out of her life. He never stopped loving her, not stopped wanting her. Celeste Harper finally had everything she wanted—or so she thought. She’d escaped her past. She’d escaped her demons. But she couldn’t escape herself…or the man she’d left behind all those years ago. Looking into his eyes ten years later, she realizes it’s her turn to make a choice—let go of that pain and take him back. Or walk away…and face a future without him.

The extremely secret Agency for Covert Rare Operatives is the only thing that stands between the human race and complete chaos. Now, two agents with special abilities, Annika Svenson and Creed McCabe, are sent to stop a man who has harnessed the power of the supernatural world. But Creed and Annika have a history that puts them at odds — and in closer, hotter contact than they’d like. In this ACRO story, which falls in the series timeline between Riding the Storm and Unleashing the Storm, Annika and Creed grow closer, despite their resistance. And with their lives are on the line, they find they must not only work together, but be together, or risk a terrifying fate that could consume them both…

These two short stories contain hot guys, determined women and some sexiness. Please note…they have been previously published, but we did add some new material.

Head over to Shiloh Walker's website for a chance to win your very own copy of Deadly Desires!
Posted by mslizalou at Thursday, May 16, 2013