I'm so excited to welcome Ruthie Knox to my blog today!!! I'm pretty sure y'all can hear me squealing and going all fan-girl from wherever you are right now. I've been a fan of Ruthie's since reading her very first book, Ride With Me.

Liza invited me to say a few words about Along Came Trouble, my latest (longest) novel, which came out earlier this week from Random House / Loveswept. Along Came Trouble is the second book in my Camelot series; the first, How To Misbehave, got the thumbs-up from Liza. J

This book is a little different. It’s a bodyguard story, but it’s far more the story of the heroine, Ellen, than of the hero, Caleb. And Ellen is . . . difficult. For some readers, she’s *too* difficult, and I can understand that. But I guess I see the hero, Caleb, as a little more flawed than some readers have—and the heroine as justifiably cautious, rather than, er, a little bit bitchy. Yes, Caleb is swoony and smart, good at his job—but does that mean Ellen’s obligated to swoon, to follow his lead, to fall in love with him? These are legitimate questions, to me.

I see this as a novel about what happens when a woman meets the right man at the wrong time and has to decide how much of herself to give him when she doesn’t feel like she’s got any self to spare. And most of all it’s about how hard it is to find a balance between dependence, independence, and interdependence—and how love can lift our burdens and help us become better versions of ourselves, if we are brave enough to let it.

In this excerpt, we see Ellen and Caleb talking on her front porch while he changes a security light bulb that’s too high for her to reach and she tries to cope with simultaneously being attracted to him and feeling panicked that he’s threatening her independence. (She had a bad first marriage. Really bad.) The “new clients” they’re talking about are Ellen’s neighbor (“some rich pop star’s mistress”) and Ellen herself (“his pampered sister”). The pop star is her brother, Jamie. Caleb and the neighbor, Carly, are old friends. It’s all very tongue-in-cheek. J

“So how was your day?” she asked as he leaned the ladder against the house. She needed the distraction, needed to make this small moment of male home improvement feel unimportant in order to counteract the fact that her armpits were damp with anxious sweat that made very little sense.
This was a light bulb, not the first domino in a chain. Every decision would be hers to make, individually and on her own timeline.
He couldn’t take that away from her. And if he tried—well, then he would deserve to find out how hard she could fight. Right now, he wasn’t her enemy. He was a nice guy offering to change the light bulb over her front porch.
Caleb threw her a lopsided grin as he ascended. “Well, it started off pretty good. I got a new client this morning.”
“Oh?”
“Yeah. Some rich pop star’s mistress, the way I understand it. And his pampered sister. But here’s the trouble, see?” He looked down at her, and just being the focus of his dark-brown gaze made her feel interesting. “Would you hand me the bulb?”
Ellen blinked.
“Over there?” He pointed.
Gangly as an ostrich, she rushed to pick it up from where he’d set it down. When she handed it to him, he set it on the top step of the ladder and carried on being charming and helpful.
“The sister wouldn’t let me in her house, and the mistress has an eccentric grandmother who cornered me with photo albums and scrapbooks.”
“Nana was there?”
Carly’s eighty-four-year-old grandmother had recovered slowly after breaking her hip last year. She’d decided to move into an assisted living facility in Mount Pleasant, turning her house over to Carly, who’d needed a refuge after her marriage broke up. But as much as Nana relished the social opportunities of her new living situation, she still spent a lot of time over at Carly’s. She claimed she needed time off from all the “old people.”
“Yes, and she was in fine form.” He reached up and unscrewed the burned-out bulb, the movement so effortless, Ellen wanted to cry.
“What, she doesn’t like you?” she asked. “I’d think you’d be exactly Nana’s type.”
“No, Nana loves me. She’s loved me since Carly brought me home in the fourth grade and I ate an entire plate of her chocolate-chip cookies.”
“Her chocolate-chip cookies are awful.”
“I know. But she kept offering them to me, and my mom always says it’s impolite to refuse food at a stranger’s house, so I kept eating them and praying for rescue.”
From four feet above her head, he smiled his dazzling smile. With the color leaching out of the sky, he looked as though he’d been lit from the inside, his teeth whiter and his skin darker than they had been this morning. Phosphorescent, almost, his bright shirt and charcoal slacks an afterimage burned onto her retinas.
He climbed down, picked up the ladder and the broken bulb, and carried them into the garage as if he owned the place.
Ellen gazed into the gathering twilight and focused on breathing.
She’d braced herself for a fight tonight, but the tussle this morning had left her so tired, and he was so much easier to be around than she’d remembered. She hadn’t been ready for this . . . what? This casual rapport. He made her feel safe, and feeling safe worried her.
Paging Dr. Freud. 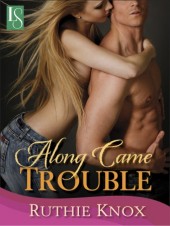 An accomplished lawyer and driven single mother, Ellen Callahan isn’t looking for any help. She’s doing just fine on her own. So Ellen’s more than a little peeved when her brother, an international pop star, hires a security guard to protect her from a prying press that will stop at nothing to dig up dirt on him. But when the tanned and toned Caleb Clark shows up at her door, Ellen might just have to plead the fifth.

Back home after a deployment in Iraq and looking for work as a civilian, Caleb signs on as Ellen’s bodyguard. After combat in the hot desert sun, this job should be a breeze. But guarding the willful beauty is harder than he imagined—and Caleb can’t resist the temptation to mix business with pleasure. With their desires growing more undeniable by the day, Ellen and Caleb give in to an evening of steamy passion. But will they ever be able to share more than just a one-night stand?

Read more about Along Came Trouble on Ruthie’s website

View the Random House page for Along Came Trouble

Shelve or find out more on Goodreads 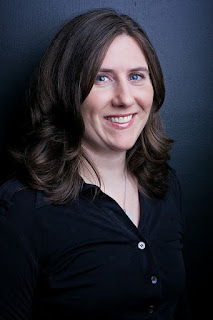 Ruthie Knox graduated from Grinnell College as an English and history double major and went on to earn a Ph.D. in modern British history that she’s put to remarkably little use. She debuted as a romance novelist with Ride with Me—probably the only existing cross-country bicycling love story yet to be penned—and followed it up with About Last Night, which features a sizzling British banker hero with the unlikely name of Neville. Other publications include Room at the Inn (a Christmas novella) and How To Misbehave, book 1 in the Camelot series. She moonlights as a mother, Tweets incessantly, and bakes a mean focaccia.

TRAILER
Random House made a book trailer for Along Came Trouble that goes live on 3/10. If you click the trailer button it will take you to Ruthie's website so you can view the trailer.

Hi, Liza, and welcome, Ruthie. No. Just...nonononoNOOOOOOOOOOOOOO! I don't have room for more books. I don't. I will not click. I will not download. Oh, heck. Who am I kidding. *sigh*

Liza is a huge fan of yours and even though our tastes are very similiar, I've been avoiding you, Ruthie. No more. I surrender! ;)

Thanks for hosting me, Liza!

Silver, I accept your surrender! Hope you enjoy the book, or whatever you read. :-)