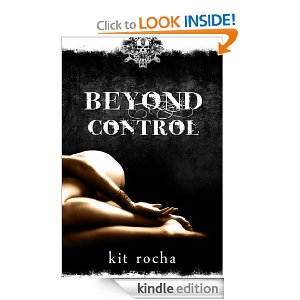 Beyond Control (Beyond, Book Two) is the newest release from author Kit Rocha. The official release date was March 13, 2013. From the author’s website.~
She refuses to be owned.

Alexa Parrino escaped a life of servitude and survived danger on the streets to become one of the most trusted, influential people in Sector Four, where the O’Kanes rule with a hedonistic but iron fist. Lex has been at the top for years, and there’s almost nothing she wouldn’t do for the gang…and for its leader. Lie, steal, kill—but she bows to no one, not even Dallas O’Kane.

He’ll settle for nothing less.

Dallas fought long and hard to carve a slice of order out of the chaos of the sectors. Dangers both large and small threaten his people, but it’s nothing he can’t handle. His liquor business is flourishing, and new opportunities fuel his ambition. Lex could help him expand his empire, something he wants almost as much as he wants her. And no one says no to the king of Sector Four.

Falling into bed is easy, but their sexual games are anything but casual. Attraction quickly turns to obsession, and their careful dance of heady dominance and sweet submission uncovers a need so deep, so strong, it could crush them both.

I was lucky enough to get an early copy of Beyond Control thanks to the author from NetGalley. I’ve been dying to read Lex and Dallas’s book since we first met them in Beyond Shame and was super excited to get their book so early in the series. Let me just say Kit Rocha totally delivered with this book!

I’m not sure I can express how much I loved this book. Lex and Declan (Dallas’s given name, which only Lex ever calls him) are just so perfect for one another. If I had read an entire book that only focused on them, I would have been over the moon and loved it. However, by adding in all my favorite O’Kane characters, Beyond Control became so much more. Kit Rocha writes the best Alpha hero and kick-ass heroine with Dallas and Lex. I also loved that we got to see them interact with Jas and Noelle, Ace (OMG I love him), Bren, and the rest of the O’Kanes. Much like Beyond Shame, Beyond Control is off the charts hot and dirty…and only in a good way. I don’t suggest reading in public unless you are okay with strangers asking if you are okay when your face heats up while reading.

Beyond Control is going at the top of my favorite books read in 2013 and it is only March. I’m already counting down the days until Beyond Pain, which is Six and Bren’s book, is released. Kit Rocha has become one of my favorite and must-read authors and I can’t wait to see where the Beyond series takes us in the future.