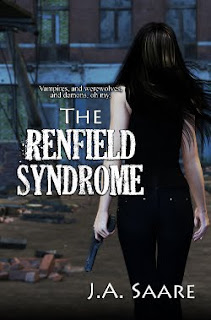 The Renfield Syndrome is the 2nd book in The Rhiannon’s Law series by J.A. Saare. From the author’s website.~

Vampires, and werewolves, and demons, oh my.

Rhiannon thought facing off against a deranged child vampire was the most dangerous task she would ever have to undertake, but she’s about to discover making a deal with a demon is far, far worse. Sent forward into another reality, one in which vampires are now dominating nearly extinct humans, she realizes the sooner she returns to her vampire lover, Disco, the better.

Unfortunately, time changes a lot of things; including those most trusted around her. When she’s faced with a loss and betrayal unlike any she has ever known, her focus shifts from severing the debt between the demon that wants to kill her, to exacting a revenge that will bring forth consequences she never could have fathomed. By reaching out to the darkness lingering within her, she’ll find the strength to push forward despite the circumstances that would see her dead and buried.

After all, when it’s all said and done, all that she has left to lose is her soul.

I really don’t want to post any spoilers, so I’m going to be very limited in what I say about The Renfield Syndrome. I have been waiting to see what happened to Rhiannon since Jamie threw us the big twist at the end of Dead, Undead, or Somewhere in Between (which I absolutely loved, by the way). Not only was Rhiannon’s new world completely different from the one she left behind, but she immediately is thrown into a situation where she has very little control. We get to spend time with some of the vampires from DUOSIB, and also get to meet some new characters. Carter is the one that stands out with me the most. He and his pack offer to help keep Rhiannon safe from the vampires of the future, even when she wants to go find Disco and his friends, Goose(Ethan) and Paine. In fact, Carter intrigues me so much, I really hope we get to see more of him in the future.

Saare throws more twist and turns at her readers with The Renfield Syndrome, and only has me wanting to read the next book in this series even more. The Ripple Effect will be the 3rd book in The Rhiannon’s Law series, and I believe it hopefully will be released in early 2012.

Well said! This was one of the best second books I've ever read.

I was really intrigued by Carter too! He really stood out to me, and not just because he was a big hairy werewolf. ;) I second my girl C's statement - this was one of the best second books I've ever read! Can't wait for The Ripple Effect!!

Yep yep yep!!! Agree with all of it. LOVED what Jaime did with this book and the direction she is taking things in!!

I have to say Jamie gave us one of the best 2nd books in a series ever! As I told her on twitter the other night. She is the queen of the twist and turns.