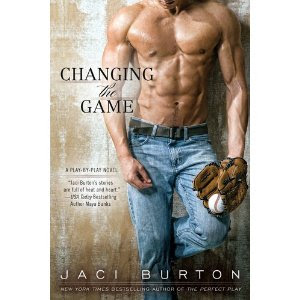 Changing the Game is book two in the Play-by-Play series by Jaci Burton. From the author’s website.~

Most people play by the rules. Gavin and Liz aren't most people...

Win at any cost. That's always been the mantra of sports agent Liz Darnell. When she carries things too far and risks losing her number-one client, baseball pro Gavin Riley, Liz realizes that she'll have to work extra innings to win him back. It might not be too much of a stretch. She's had a thing for this player's moves since she first laid eyes on him, and by the looks of it, he wants her just as bad.

Gavin's more than ready—especially when Liz is offering herself as part of the bargain. And as much of her as Gavin wants. For added thrills, he decides to throw a little curve ball Liz's way to see just how far she's truly willing to go to keep him as a client. But when love unexpectedly enters the playing field, neither Liz nor Gavin are ready for the biggest game-changer of them all.

I am a huge fan of the Play-by-Play series by Jaci. The Perfect Play, the first book in the series, is one of my favorite reads this year. I have to say that I loved Changing the Game even more. There was just something about Gavin that pulled me in during The Perfect Play. Maybe it was because he seemed like such a bad boy next to his perfect brother, Mick. Liz really messed up with Mick at the end of The Perfect Play. So much so, she lost him as a client and wasn’t sure she wouldn’t lose Gavin as a client too.

Liz has been in love with Gavin from the first time she saw him. However, she has never acted on those feelings until she kissed Gavin at the end of The Perfect Play. Gavin always thought Liz was sexy, but never thought she would ever be more than his agent. Add a little too much alcohol one night and mix in a night of amazing sex, and the game changes completely. Gavin gets Liz to agree to stay at his house with him during Spring Training and they spend pretty much every hour of the day together. Liz even makes friends with a couple of the player’s wives and has girlfriends for the first time in her life.

Liz is very cautious about her feelings because of her past. Gavin has played the field for so many years he doesn’t seem to realize how much Liz means to him until it is almost too late. We get to spend time with Gavin’s family once again in this book. I love the Riley clan…well, all but Mick in this book. He really wouldn’t let go of his anger towards Liz. I’m not saying he didn’t have a reason to be angry, but once she apologized and fixed the situation, he needed to man up and stop being an ass. Hell, even Tara and Nathan had forgiven Liz and Mick continued to be a total ass to her. When the Riley family has to deal with a major medical drama, Liz and Gavin and their relationship is really put to the test. Liz is put in the position of telling Gavin he needs to return to work when all he wants to do is stay home and watch over his family. Mick throws more doubt at Gavin about Liz’s motives and Gavin messes up so bad, I don’t know that I would have forgiven him. However, Gavin does find a way to step up to the plate and make things right.

I loved Gavin and Liz together so much. They both are such strong characters, yet have vulnerability underneath. Jaci gives her readers another winner filled with smoking-hot sex and lots of romance. We also get to meet some of Gavin’s teammates and even a new client of Liz’s. With all these new characters being introduced, I’m hoping we will get many more books in the Play-by-Play series in the future.

Taking a Shot is the next book in the Play-by-Play series and it is set to be released on March 6, 2012. Taking a Shot will be about Jenna Riley, Mick’s and Gavin’s sister, and hockey player Tyler Anderson, who we met for the first time in Changing the Game.

I wasn't Liz's biggest fan in the first book because of the crap she pulled with the heroine's kid, so she's got a LOT of redeeming herself to do for me to like her... which is a big thing for me when I'm reading a book. I have to like the hero & heroine or what's the point in reading the book, right? I'm going to give it a try because the reviews are so fantastic, but I'm really iffy about it.

I had a problem with what Liz did to Tara's son too. However, she did make things right and the more I read about her and got to know her, the easier it was to like. her.

You still might not be her biggest fan, but I was able to get past what she did with Mick and honestly like her.