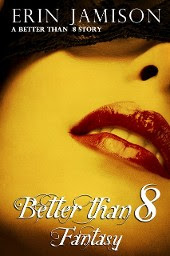 Better Than Eight is the latest ebook release by Erin Jamison. From the author’s website.~

Amara Simmons has always fantasized about having two lovers but believes it is just that: a fantasy. She likes her men “gifted”, if you know what I mean. At the suggestion of a friend she registers for an online dating website for well-endowed men called betterthan8.com. She believes nothing will come of her site membership but after months of flirting online via email and instant messaging, she’s shocked to discover that she’s fallen for a gorgeous Latin man that has the potential to be her everything – except he never calls and she has no idea why. Nursing a broken heart she is totally unprepared to meet her would-be Latin lover in person much less at the negotiation table of a multi-million dollar real estate deal. In Puerto Rico, passion ignites. Promises are finally fulfilled and the lines of reality blur when her fantasy finally blooms to life. Can Amara have it all: the deal, the man, and the fantasy?

I was contacted by the author and given a copy of Better Than Eight for review. I really liked Amara’s story. She is a strong woman overall who really only had one questionable choice – keeping in contact with an ex who is now married to another woman. He also still thinks he and Amara should be bed buddies.

I was a bit thrown by his roommate, who was a man, and the ménage that happened. However, once I got over my initial shock, it did work with the characters and the story. I really enjoyed Better Than Eight and look forward to reading more books by Erin Jamison in the future.