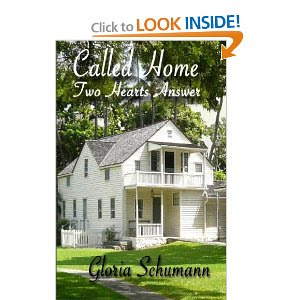 Called Home: Two Hearts Answer is the debut novel by Gloria Schumann. From the author’s website.~

Emma Benson's view of life was crafted as a child by the death of her brother, the abandonment by her father and later, the man she trusted she would marry. A teacher by training, she forgoes her chosen path to save the Wisconsin farm she calls home from financial ruin.

A tornado threatens damage, but David Schlosser—back in town after years in New York writing best-selling novels—could ruin her neatly tended life. He's looking for the charms of the small town he once rejected and finds more than he bargained for. He risks everything to get what he wants.

The storms of life throw Emma and David together and into the world of a criminal determined to ruin their plans by any means necessary. Robbery and near death connect Emma and David to their nemesis and during the throes of securing life and limb they make every effort to resist falling for one another.

I was sent a copy of Called Home: Two Hearts Answer for review by the author. I enjoyed the story and really liked both Emma and David a great deal. Schumann gives her readers a sweet romance with a really great mystery thrown into the mix. I’m pretty good about figuring out the bad guy usually, and was partly right in my guess.

I also liked watching Emma and David fall for one another. David is sure of himself very early in the story, while Emma fights her attraction to David for some time due to a past bad romance. I read all genres of romance, and was drawn into this sweet romance from the beginning. I did question Emma taking so long to admit her feelings, but understood her hesitancy based on her history.

When Gloria contacted me about reviewing her book, I asked her to answer a few questions for my blog.

LB: When did you start writing?

S: I started writing in the Spring of 2008. I can't believe it's been over three years already, but then again, a lot has happened in the meantime, and I look forward to even more taking place in the future.

LB: Who is your biggest supporter of you writing?

GS: My husband, Paul, was my first & biggest fan. When I began writing, it was on a trial & secretive basis. I told no one. Not even him. I figured if I looked at it & it wanted to make me throw up, no one would be the wiser, but if, in fact, was tolerable, I would show it to the most trusted person in my life, with orders to, pleeeaaase tell me if it is in fact crap. He would read a couple chapters at a time when I had them completed & give me comments. One day after a few times of doing so, he left it for me on the table the next morning with a note on it stating, "You've got a real talent for this, keep it up." I was sold. That first book was self-published & one I consider a practice book.

LB: How did you celebrate your first published book?

GS: When I signed the contract, I happened to be at my parents' house 1500 miles from home with my family. We broke out a couple bottles of good wine, some special cheese & crackers & had a good time dreaming about the future. It was fabulous. I like quiet, easy celebrations with family. They're the best.

LB: Who is your favorite author/writer (you can name more than one if you can’t pick just one)?

GS: That parentheses part is for me. I definitely don't like naming favorites for anything, let alone authors. I'm going to have to go with Nicholas Sparks & Nora Roberts, since they're the ones that got me hooked on reading in the first place and, in turn, writing. Would also have to throw in Stephanie Meyer. You can see I go for the emotion of love through writing. I just love it when an author can give me that tingle just from a set of words. Amazing!

GS: In summer is a bad time to ask me. There isn't much typical about any given day in summer. They're pretty distinguishable from each other. During the school year, there is a lot more of a schedule, and I use that word only in the most atypical way, but only because of my kids school day. I've never been much of a schedule person, but have been pondering the virtues of instituting one for myself this coming school year. I get a bit obsessive with things. So, I'll start promoting & spend the whole day doing that & nothing else. Or I'll get in a real rhythm of writing & not want to stop for anything. That one's a bit more understandable, but I'll let you know somewhere down the road how that all goes.

LB: What story(ies) are you currently working on?

GS: I'm in between at the moment. I have "Twisted Tree" into the publisher as we speak & I'm in the thinking stage of the next project. "Twisted Tree" is the story of Kate, cousin of Emma from "Called Home", who finds herself wishing her life would go somewhere, but winds up in a place she would never have imagined. Taking care of an eight year old, orphaned girl having had no experience with children, not even babysitting & no husband for support. Kate wonders how her life got so messed up & she wonders if it will ever get straightened out to her liking. Of course, Jared, a famous artist, comes along to add to the mayhem of her life. Will he put it in order? Or will he just further scramble the pieces of her already screwed up life? Why, oh why, did she ever wish for change? Someone should have stopped her.