The Claiming of Suzy 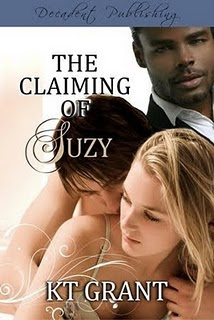 The Claiming of Suzy is the super sexy sequel to For the Love of Mollie by author KT Grant. Synopsis from the author’s website.~

Suzy Bean is a woman who lives in the moment and doesn't mind her overabundant curves. The man she secretly loves, JC Mosino, is the only one who can make her untamed sexual fantasies a reality. After having a bit too much to drink at a party, JC drives her home, where their passions ignite. Suzy thinks that this is night where she and JC will go from being friends to lovers. Unfortunately it doesn't happen quite like that and Suzy ends up throwing JC out because of something he says in the heat of the moment that she takes the wrong way.

Now Suzy's whole world has been turned upside down because she's given up smoking and is sexually frustrated. When she meets a handsome, flirty stranger, who makes her body respond, she becomes even more frustrated. This chance meeting is one she'll never forget, for Mr. Hunk is her new boss, Xavier Marks. Suzy feels guilty because her attraction to Xavier is growing while she still pines for JC.

JC's craving for Suzy is out of control where he wants nothing more than to work things out and become her lover. He has a plan in doing so, but has to work fast as Xavier tries to seduce Suzy. JC is having no part of that, and will do whatever he can to claim this brassy, buxom beauty for his own.

I was lucky enough to be sent an early copy of The Claiming of Suzy from the author. I’ve read almost everything KT Grant has written and loved each and every story. The Claiming of Suzy is another winner. We first met Suzy Bean and JC Mosino in For the Love of Mollie, Suzy is Mollie’s best friend and JC was initially the object of Mollie’s affection. Suzy has been attracted to JC forever, but hid her feeling until after her friend Mollie found her HEA with Conner. Suzy has now decided she will make a move on JC and everything is super hot until JC says something that Suzy, and any woman with body image issues, takes the wrong way. Even though Suzy is mad at JC, she is still wants him like she has never wanted anyone else. Then walks in her new boss, Xavier Marks and Suzy finds herself attracted to another man. Suzy must now decide if she wants a relationship with JC or explore her attraction for Xavier.

I found The Claiming of Suzy to be a fun, fast and super sexy read. I had liked the glimpses of Suzy and JC I saw in Mollie’s story and loved finding out more about their characters. As I was cheering for Suzy and JC, I fell just a little for Xavier myself (might be because he is compared to Blair Underwood who I’ve loved since he was first on LA Law). I’m happy to say KT Grant already has his story in the works and I can’t wait for the release of Xavier’s Loving Arms. The Claiming of Suzy was released today and can be ordered as an ebook from Decadent Publishing.

Posted by mslizalou at Saturday, September 25, 2010

Thanks for the review! :)

Congrats on another great story.
Keep on rockin.