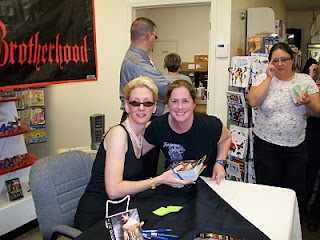 I went to the JR Ward book signing for Crave on Saturday with my cousins, who are huge fans of the WARDen just like me. Thanks to my cousin Gina, I have lots of notes from the book signing Q&A period. The WARDen was a beautiful as ever and so much fun to be around as she answered questions for over an hour (using very colorful language and visuals). I need to make sure I bring a video camera and a digital recorder for the next book signing, which she said would be when Lover Unleashed is released in April. I can't promise there are no spoilers in this post, but I do promise no information about the end of Crave is in this post. Also need to post a reminder that none of this information can be posted on her boards or the Yahoo group, but we weren't told we couldn't post on our personal blogs.

Will there be a book for Tohrment? Yes, but not any time soon.

Will the Scribe Virgin get a book? She's not a big fan of her, so that's unknown.

Also asked about the SV's father and was told much like Boo and the coffins, it would be explained eventually.

Will there be more brothers? Yes, there will be at least 6 new brothers. We weren't given details as to when we would meet them or who they are.

What about Qhuinn & Blay? There will be Qhuinn & Blay stuff in Lover Unleashed. Also re-confirmed we will get their story in a "novella" sometime after Wrath & Rhage's are published. Promised to do it right and it would focus on them. Most likely will be named Qhuinn & Blay so people know what they are getting. (her novellas will be longer than the average novella)

Is Lassiter the missing angel in Covet? She wasn't exactly sure how the two series crossed, just that the 3rd book (Envy)'s hero is mentioned in LU and the Angels end up back in Caldwell. Jim will be looking for Sissy's body.

Lassiter will get his own book, in the BDB series sometime after Tohr.

Will No' one(Xhex's mom) and Tohr get together? JR put her hands together in the shape of a heart.

Does Layla get her own story? We were told to "keep reading". Sounds like a yes to me. :)

Muhrder will not be in LU.

Who's her favorite female character? Beth or Xhex, although she really didn't like Xhex when she first showed up.

How are Manny & Butch related? She said to "keep reading". However, a few minutes later was asked if Butch and Manny's father would be revealed and she said yes. (didn't find it surprising as I thought Butch and Manny were brothers from the first time we met Manny).

Yes, the promise the Scribe Virgin demanded from Wrath will come to light, just not sure when.

Re-confirmed that JM and the brothers will never know he is Darius reincarnated.

Will Jim, Adrian or Eddie be one of the souls saved in the Fallen Angel series? Yes, but wouldn't tell us who.

V & Jane will have big trouble in LU. V is going to lose it big time over his mommy issues, with how she has treated both him and Payne. Very colorful descriptions and language at this point. Must bring digital recorder next time so I can get it all. Something big will happen with Doc Jane too and then something really BIG will happen. She almost left it out, but the story wouldn't finish without it. Makes publisher very nervous and JR very nervous. Asked if it has anything to do with BDSM and was told "What the f*** do you think it is going to be? Not like V has a fashion sense issue." The WARDen played dumb when asked if Butch would be involved...guessing and hoping he is involved. :)

Z is her favorite hero, but she has never read his story again because it is too upsetting.

Her Slice of Life novellas will be available in both print and ebook.

Will JM join the brotherhood? Yes, soon, along with Xhex and Payne.

iAm and Trez will have their own books focused on their completely different culture.

Rehv is still around, just busy as the king of the freaks. He was there when Xhex and JM were mated.

Does Devina get power from her souls? No, she's just a hoarder. Her power is independent of the repercussions from that power. She will also continue seeing her therapist. (Can't wait to see what real world issues she assigns to things in the future)

Will Lash come back? He went back to the Omega, who's not in a hurry to bring him back.

She agreed they really need to get going on the merchandise. Way past time to work on it.

She was asked if we would ever see Nalla's change? Conceivably in the next 25 years or so. She wondered which male would be brave enough to walk in that house for Nalla.

My cousin took really great notes, but I'm sure I still left something out. She talked and answered questions for a little over an hour and was so awesome. So worth any amount of travel to go to one of her book signings.

I want Lover Unleashed and Qhuay too! Was so excited to hear so many people cheer when she told us we would get their book. She said the novella would be at least 100k words, so sounds like a bit more than a novella to me. :)

Thanks for this!! Oh man, Lover Mine is one of my most favorite books this year, *swoon*
I freaking LOVE the tension between V and Butch even though they are married to Doc Jane and Marissa.
I love that Z is her favorite, he's my favorite too. Well, JM kinda is too. Well, I guess they both are but in very different ways :D

Only the WARDen would refer to a 100K book as a novella. LMAO!

Can NOT wait for Lover Unleashed. I agree with Spaz...I like that Butch and V are mated. But I gotta admit, I do like the "thing" that they have between them too.

Thanks for taking such great notes!!

Thanks for this LL! You did great taking notes! :D

This was a great post...I really enjoyed it!

Thanks for sharing!
Hawk