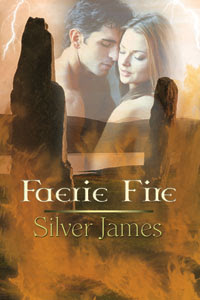 Faerie Fire is the second book in the Tir Nan Óg series by Silver James. Synopsis from the author’s website. ~

In the second book of the Tir Nan Óg, the feud between the two faeries, Manannan Mac Lir and Abhean the Harper, which has simmered throughout time, finally bubbles over. Continuing the theme of reincarnation and chances missed in the past affecting the present, Faerie Fire introduces new characters, descendants of the families first met in Faerie Fate.

When Moira O’Connor first touches SAS Captain Duncan Ross time turns topsy-turvy. She recalls memories of a former life, one in which Duncan was her lover—one in which he arrived too late to save Moira’s life as she was burned for a witch.

In their present life, while Duncan faces his own demons, he must save Moira from the Irish terrorist threatening her father, a US Senator. This time he’s determined to save the woman he loves, even if he must sacrifice his life for hers. Will Duncan and Moira survive to say the vows, binding their lives for all eternity?

On Midsummer’s Eve, when the veil between the realms thins, will faerie magic work miracles or will the lovers succumb to Faerie Fire? Without the words, history is doomed to repeat itself.

I was lucky enough to win a digital ARC of Faerie Fire from Silver’s blog, and was lucky again to receive my paperback copy in the mail on Friday for my keeper shelf. Thanks to Silver for my ARC and The Wild Rose Press for shipping out their new releases early.

I loved Faerie Fire every bit as much as I loved the first book in this series, Faerie Fate. Silver James writes beautiful stories filled with strong characters. Faerie Fire is the story of Moira O’Conner and Duncan Ross, their past life and their present life. There was just something about Moira that pulled me to her from the very first. She is a strong woman, and has the ability to read people as she meets them. Duncan became another one of my book boyfriends. He is just so sexy and tough, yet around Moira, he is so gentle. The combination of all these characteristics made Duncan into a perfect hero in my opinion. We also have another stellar cast of supporting characters. I have to say a couple of the characters were pretty unlikeable in the beginning, but I did like at least one of those characters by the end of the book.

Silver James again gives her readers a fabulous story full of magic, mystery, and romance. The scheduled release date for Faerie Fire is Friday, September 17, 2010, and it can be ordered either in eBook or paperback at www.thewildrosepress.com.

Posted by mslizalou at Tuesday, September 14, 2010