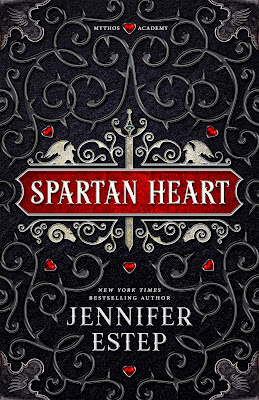 Available in: E-book and print book

Audiobook: I should have more news to share on the audiobook soon. But as of right now, the audiobook will NOT be released on Dec. 5.

At Mythos Academy, everyone knows exactly who I am: Rory Forseti, Spartan girl and the daughter of Reapers.

Even though I fought alongside my cousin Gwen Frost to save the mythological world from Loki and his evil Reapers of Chaos, I’m still the most hated girl at the academy because of all the horrible things my parents did. I had hoped that this school year would be different, but the other kids just won’t let me forget about my parents.

But something strange is going on at the Colorado academy. First, I run into a Viking guy who dislikes me more than most. Then I notice some odd artifacts in the Library of Antiquities. And worst of all, I start hearing rumors about a new group of Reapers who can summon mythological monsters.

I might be the most hated girl at Mythos Academy, but I’m also the only one who can save it . . .

Jennifer Estep is a New York Times, USA Today, and international bestselling author prowling the streets of her imagination in search of her next fantasy idea.

Jennifer is also the author of the Elemental Assassin, Kill the Queen, Bigtime, and Black Blade series.

SPARTAN HEART EXCERPT
The first day of school is always the worst.
A new school year means new classes, new books, new professors, new projects to prepare and papers to write. Plus, you have to decide what you’re going to wear and how you’re going to act and what kind of person you’re going to be—and be seen as—until school breaks for the summer several long, distant, dreary months in the future. There’s so much freaking pressure to get every little thing right starting from that very first day. And that’s just for regular kids.
That pressure is turned up to extremes at Mythos Academy.
“Are you excited for the first day of school?” a light, happy voice asked.
I stuffed one last textbook into my dark green messenger bag, then slid it over to one side of the kitchen table. I looked up to find Rachel Maddox, my aunt, smiling at me. “Not really.”
Instead of being put off by my sour, surly tone, Aunt Rachel’s smile widened. “Well, you should be excited. It’s a brand-new school year and a brand-new start for us. Everything’s going to be great, Rory. You’ll see.”
“You mean like all the other kids, professors, and workers suddenly forgetting that my parents were Reapers of Chaos and all the horrible things they did?” I snorted. “Not bloody likely.”
Aunt Rachel’s warm smile vanished like a candle flame being snuffed out by a cold wind. She dropped her gaze from mine and turned back to the stove, flipping the blackberry pancakes that she was making special for my first day of school. And hers too, since she worked as a chef in the Mythos dining hall.
I winced, guilt churning in my stomach. Aunt Rachel was twenty-seven, only ten years older than me, since I had turned seventeen a few days ago. She had always been more of a big sister to me than an aunt—at least until my parents were murdered last year.
My mom and dad, Rebecca and Tyson Forseti, hadn’t been brave, strong, noble Spartan warriors like I’d thought. The two of them had secretly been Reapers, working with others to bring Loki, the evil Norse god of chaos, back here to the mortal realm. And my parents hadn’t been your average, run-of-the-mill Reaper bad guys. Oh, no. They had been Reaper assassins, the worst of the worst, responsible for killing dozens and dozens of innocent people.
I had been absolutely horrified when I’d learned the truth about them, especially since the whole time, all my years growing up, I had never realized what kind of evil warriors—what kind of evil people—they truly were.
My parents had fooled me as easily as they had everyone else, leaving behind a deep, jagged wound that just wouldn’t heal. Even now, a year after their deaths, their betrayal still coated my heart like a cold frost, freezing out all my previous love for them.
Sometimes I couldn’t feel anything but that cold numbing me from the inside out. Other times, I was so angry at my parents for all their lies that I half expected red-hot steam to spew out of my ears like I was a cartoon character. In those moments, I wanted to lash out at everyone and everything around me. I just wanted to hurt someone or something the same way my parents had hurt me, especially since I was still dealing with the consequences of all their evil actions. Maybe I also wanted to lash out because I was a Spartan, and fighting was what we were naturally hardwired to do. If only dealing with my emotions were as easy as battling Reapers.
I didn’t know which was worse, not feeling anything or feeling way too much. Or maybe it was going back and forth between the two extremes. Either way, the cold numbness and hot anger had been my constant companions ever since the day I found out about my parents.
But I wasn’t the only one who’d been devastated by the truth. So had Aunt Rachel, who had always looked up to her big sister, Rebecca. Aunt Rachel had been hurt just as badly as I had been, but she’d stepped up and taken me in anyway, despite all the horrible things my parents had done. She had even put her dreams of going to culinary school in Paris on hold so she could stay here in Colorado and take care of me. Aunt Rachel had been so good to me this past year, and she did her absolute best to protect me.
I didn’t mean to snap at Aunt Rachel. Really, I didn’t. That was my hot anger boiling up through the icy numbness and getting the best of me. Sometimes, though, it was hard to even look at her, since she had the same long, glossy black hair, green eyes, and pretty features that my mom had. The same black hair and green eyes that I had as well and the same features that haunted me every time I looked in the mirror.
More than once, I had thought about dyeing my hair neon-pink or wearing violet contacts so I wouldn’t look so much like my mom anymore. Who wanted to be the daughter of notorious Reaper assassins? Much less look exactly like one of them? Nobody, that’s who.

But that was me, Rory Forseti, and this was my life, like it or not.
Posted by mslizalou at Wednesday, December 06, 2017