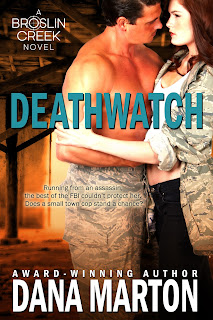 Happy release day to author Dana Marton for Deathwatch!!! Deathwatch is the 3rd book in the Broslin Creek series. I’m so excited to be part of her release day blitz to celebrate her newest book.

Deathwatch Blurb:
The only person who can identify the most notorious hit man in the country, Kate Bridges is running for her life. Murphy Dolan is in the Army Reserves, returning from his 2nd tour of duty, only to find a stranger hiding in his house. She's scared spitless. He's completely burned out on violence. Neither has any trust left to give. 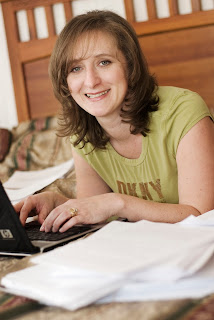 Author Bio:
Dana Marton writes fast-paced action-adventure romances that take her readers all over the globe. She is a Rita Award finalist and the winner of the Daphne du Maurier Award of Excellence. She loves writing stories of intrigue, filled with dangerous plots that try her tough-as-nails heroes and the special women they fall in love with. Her books have been published in seven languages in eleven countries around the world.
She would love to hear from her readers.
Okay, the above version is the glamour version for press releases. The truth is that my path to publication was nothing but unglamorous. I wrote for 13 years and completed 4 books (as well as having others in various stages of completion) before I finally received a call from a Harlequin editor. I was beginning to wonder if I was being tenacious or just too dense to know when to quit. But it all worked out at the end! J I love, love, love writing and would spend all day in front of the computer if I could just break my family of the habit of wanting to eat and wear clean clothes. What’s up with that? But I must get up from the desk now and then, if only because my Internet connection goes down or my ancient PC overheats. Then I do enjoy cooking, knitting, hunting for treasures at the flea market, our Beagle, Peanut the Destroyer, and gardening.
I’d love it if you picked up one of my books and emailed me to tell me what you thought of it. I’ve been known to name characters after readers. Just ask Princess Judi.
Posted by mslizalou at Monday, August 19, 2013

Thank you so much for featuring DEATHWATCH! I'm so excited about this story, and so far the reviews are overwhelmingly great. Kate and Murph are both wonderfully complex characters with scars and trouble pasts. It's incredibly gratifying to see readers respond to them as much as I did. Thank you!!!

Happy to help out! I'm a fan of the series and love sharing books I enjoy with other readers. :)