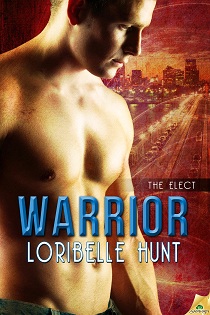 Warrior: The Elect 3
Years ago, former Special Ops officer Carter Owens made the biggest mistake of his life. He met the woman of his dreams—and didn’t fight to keep her. Now that he’s learned Jamie Wade is still alive, and that she bore him a son, Carter plans to protect his family at all costs. Right after he’s rescued her along with several other Elect members being held prisoner in a private hospital.

He isn’t prepared to find her battered, drugged-up, and half-starved. Whatever her captor wanted, the madman hadn’t gone after it humanely.

When Jamie awakens, she’s stunned to find herself free of the abuser who tried and failed to make her admit she’s a telepath. As a police detective, she is driven to join the investigation into the organization that held her and her son captive. But first she’ll have to overcome Carter’s overprotective nature.

Which isn’t going to happen anytime soon, because first she has to recover—and convince him that their out-of-control sexual chemistry isn’t a good enough reason to stay.

Loribelle is offering up 1 ebook of any of her books, including Warrior as a prize on this blog tour. Please leave a comment to be entered. I'll draw a name from all the comments left and email the winner on February 4, 2013. Please leave your email address in the comment so I have a way to contact the winner.

Excerpt from Warrior: The Elect 3 below. I want to thank Loribelle so much for allowing me to help spread the word about her newest book in this series, which releases on February 5, 2013.

Author Bio
Loribelle is a former Army MP who traded in her combat boots for motherhood, flip-flops and all the Diet Coke she can drink. (She almost misses the combat boots.) She’s the author of more than twenty books, none of which her children are allowed to read. Ever. Visit her website, www.loribellehunt.com, or www.facebook.com/loribelle.hunt for information on new releases.

Thanks for the review! I've missed this series so now I need to go and get book one.

How did I miss this series? What a great premise and wow! The chemistry between these two could melt my ereader.

Thanks for the fantastic giveaway! This series sounds awesome! Thanks for sharing :)