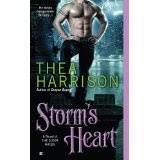 Storm’s Heart is the second book in The Elder Races series by Thea Harrison. From the back cover.~

He’s a Wyr warrior, and god of storms. She’s the heir to the Dark Fae thrown. But desire will bring both to their knees in this all-new Novel of the Elder Races.

During the rule of her murderous Dark Fae uncle, Thistle “Tricks” Periwinkle found sanctuary among the Wyr in New York. Her ethereal beauty and sparkling personality won the hearts of the public, but after her uncle’s death, there are those who don’t want to see her ascend to the thrown…
Able to wield thunder and lightning, Wyr sentinel Tiago Black Eagle has ruled the skies for centuries. His massive build and thunderous power make him one of the Wyr’s best weapons. And he’s the one sent to protect Tricks when she’s almost assassinated in Chicago.

Soon, both Tiago and Tricks will fall prey to the stormy hunger that engulfs them-a passion that will shake the very foundations of all the worlds…

Dragon Bound is the first book in this series and it is still one of my favorite books I’ve read this year. I’d even go as far as to say it’s my favorite paranormal romance I’ve read this year. So Storm’s Heart already had a great deal to live up to for me. That being said, I loved Tricks from the time we got to spend with her in Dragon Bound and was really excited to get her book.

I really liked Storm’s Heart. We learn Tricks’ real name is Naniane Lorelle, but no matter how often others call her Naniane, I still think of her as Tricks, and love learning more about her. Also, from the very beginning, it is obvious Tiago will do everything within his power to keep Tricks safe. Tiago proves he is capable of protecting Tricks from the multiple attempts on her life in Chicago. Yes, he does make a few mistakes along the way, but he doesn’t give up. We get to spend more time with some of the Wyr sentinels, meet many new faces of the Dark Fae, and even spend time with Vampyre Queen Carling. There are more battles and action packed scenes in this book, and at times the action had me on the edge of my seat.

I think Tiago and Tricks are so perfect for one another. Bother are such strong individuals and when they finally give in to their feelings for one another, it’s explosive. In fact, Tiago and Tricks were down-right HOT together. I did figure out who was behind all the attempts on Tricks’ life before it was revealed and really hated that a couple of new characters were killed in the final battle. However, I really liked everything else about this book and can’t wait to read Serpent’s Kiss, the 3rd book in The Elder Races series, which is scheduled for release on October 4, 2011. Now, I’ll buy my copy for my keeper shelf on that day, but I get to read it early thanks to a friend who has loaned me her early copy.
Posted by mslizalou at Thursday, September 22, 2011