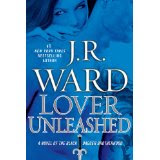 Lover Unleashed is the latest release in the popular Black Dagger Brotherhood series by J.R. Ward. From the inside cover.~

Payne, twin sister of Vishous, is cut from the same dark warrior cloth as her brother. Because she is a fighter by nature, and a maverick when it comes to the traditional role of Chosen females, there is no place for her on the Far Side…and no role for her on the front lines of the war, either.

When she suffers a paralyzing injury, human surgeon Dr. Manuel Manello is called in to treat her as only he can-and he soon gets sucked into her dangerous secret world. Although he never before believed in things that go bump in the night-like vampires-he finds himself more than willing to be seduced by the powerful female who marks both his body and his soul.

I’m a huge fan of the Black Dagger Brotherhood series. I even bought Lover Unleashed for my kindle for release date so I could finish reading it before I got my hardback copy at the book signing. I really liked Lover Unleashed. I’ve liked Payne since she first arrived on the scene, and I’ve been waiting for Manny to come back since we first met him. I knew that Manny would be important later, not only because I figured out early on that he and Butch share a father, but because I knew his surgical skills could be an asset to the Brotherhood.

I liked Payne and Manny together. Didn’t feel their connection in the beginning as much as I felt the connections with other couples in the series, but they did grow on me. As their story progressed, I did begin to feel their connection and liked them more as a couple. Honestly, I almost felt like Lover Unleashed was part 2 to Vishous and Jane’s story. Never really felt like Lover Unbound finished their story. Understand more about their relationship now and really love V and Jane together. At past book signings it had been hinted that there would be a huge scene between Butch and V. Well, we did get a big scene between them, and it even helped V move on so he and Jane could have a better relationship. Just not the big scene I was expecting to happen between V and Butch.

We also got to see glimpses of Blay and Qhuinn in Lover Unleashed. Now, I’m a huge fan of Team Qhuay and I can’t wait to get their novella. Again, it was just glimpses and not really them together. Qhuinn was so worried when Blay was injured, but wouldn’t go in to check on him. Luckily, Saxton was more than willing to give Qhuinn updates. You could tell that Saxton knows his cousin Qhuinn and Blay will eventually end up together. I just hope the WARDen will give Saxton his own HEA. We also only got to see glimpse of most of the members of the Brotherhood. With as huge as the world has become, it is really hard to see every brother in every book. Just wish we got to see a little more interaction between the brothers in each book.

Overall, I did like Lover Unleashed, and I am excited that Tohr’s book will be the next book in this series. After losing Wellsie, I’m so glad he will get a mate again and can’t wait to read their story. If the WARDen sticks to her usually schedule, we will have Tohr’s book at some point in March 2012 or April 2012.