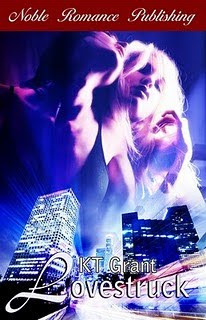 Lovestruck is the debut novel from KT Grant. Lovestruck is in eBook format only and can be ordered at www.nobelromance.com. Synopsis from the author’s website (http://ktgrant.blogspot.com/) .~

Synopsis: CEO hotel mogul Barbara Jennings has three months to decide whether to close her Manhattan hotel or cut costs by firing some of her employees. She meets her much-younger employee, Jennifer Caffey and is instantly smitten. Now Barbara has another mission, and that is to seduce the innocent Jenny.

Jenny is also attracted to the powerful and beautiful Barbara, but has never really had a steamy love affair with another woman. Unwittingly, she allows herself to be swept away by her passion for this older woman who may ruin her life.

Lovestruck is described as a May/December contemporary lesbian romance on the author’s website. I honestly didn’t know what to expect since I’ve never read either F/F or M/M romances before. I can honestly say Lovestruck is one of the most romantic and passionate stories I’ve ever read. Both Barbara and Jennifer are attracted to one another from the first time they see each other. Of course the fact that Barbara is the boss and Jenny the employee, is just one of the obstacles they have in their way. Barbara is a successful business woman who has never made public her sexual preference and Jenny is a younger woman who is still stumbling along in pursuit of the right woman. The first time Barbara and Jenny give into their attraction, Jenny totally freaks out and runs away. Barbara knows she has found someone and something special with Jenny and has no thoughts of ending it yet. As the two women continue to explore their relationship, work-life gets in the way. Jenny learns Barbara only came to the hotel to possibly close it and Jenny is so worried about not only her job, but the jobs of her friends, she puts distance between Barbara and herself.

The resolution of this story is absolutely beautiful. I saw this story as the happily ever after of two people, who just happened to be women. I thought I might be put off by a F/F relationship since I’d never read a story about one before, but found myself cheering for Barbara and Jenny from early in the story. Congratulations to KT Grant on writing an absolutely sexy, beautiful, and enchanting love story that pulls the reader in from the beginning. I look forward to many more books by KT Grant in the future.

Thanks Liza for your wonderful review! Hopefully you will be open to reading more FF or MM romances in the future. :)

I am open to more FF or MM romances now. Your book showed me how sexy they can be. I also can't wait for your contemporary that is coming out in August.

Liza: I go from FF to straight. LOL.

You should definitely give LB Gregg, Josh Lanyon and Ginn Hale a read. They write wonderful MM stories and inspired me to write my own

Thanks for the reading suggestions. I'm always looking for new authors and I'll ahve to add these to my list.

I looked on your site and your straight contemporary looks hot!