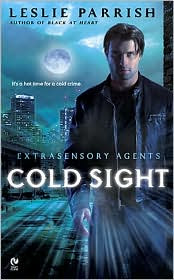 Cold Sight is the newest release by romantic suspense writer Leslie Parrish. From the back cover.~

Her Black CATs series “crackles with dark, edgy danger.” Now Leslie Parrish introduces Extrasensory Agents, a band of psychic investigators interested only in the cases nobody else wants-the coldest one.

After being made a scapegoat in a botched investigation that led to a child’s death, Aidan McConnell becomes a recluse. Still, as favors to an old friend, Aidan will help on the occasional case. But under his handsome, rugged facade, he keeps his emotions in check for fear of being burned again.

Reporter Lexie Nolan has a nose for news-and she believes a serial killer has been targeting teen girls near Savannah, Georgia. But no one believes her. So she turns to the new paranormal detective agency and sexy, mysterious Aidan for help. But just as the two begin forging a relationship, the case turns eerily personal for Lexie-and Aidan discovers that maybe he hasn’t lost the ability to feel after all.

I am a huge fan when it comes to books by Leslie Parrish, and I’m proud to admit it. I loved the Black CATs series, and am still hoping we get more books in that series. Cold Sight is the first book in Leslie Parrish’s exciting new Extrasensory Agents series. I was very lucky to be sent an ARC from the author for review, and I dropped all other books to move this one to the top of my list. I try not to put spoilers in my reviews, but there are a few semi-spoilers to come. I can say with totally honesty that I loved this book. It pushed me emotionally on every level and kept me thinking about the story long after I’d finished reading. Lexie Nolan feels in her gut there is a serial killer targeting teen girls in her town. Since the girls who have been targeted so far are all from the “wrong side of the tracks” no one believes her. When Vonnie Jackson turns up missing, Lexie seeks help in a somewhat unusual source. Aidan McConnell has psychic abilities and Lexie hopes he can help her find Vonnie before another teen girl disappears forever. Aidan is the first person to actually believe Lexie about the missing girls. Aidan had actually met Vonnie before and had been having visions of a young woman, but had not put it together yet. As Aidan helps Lexie investigate, they grow closer each day.

Lexie and Aidan discover a group of affluent men in the small town are behind a very distasteful practice. They would “borrow” many young girls from the wrong side of the tracks to use at will for their carnal pleasure and entertainment. Parrish doesn’t actually show us the flashbacks, but since Vonnie was one of the young girls, she has memories, luckily we just don’t have see them just know they existed. The adults in the small town of Granville want to shove the missing girls under the mat, with the exception of Lexie and Aidan. Only after the students of the two town schools push for their friend Vonnie, do the adults have to admit something is going on.

At this point in the story, Parrish throws a curve ball at the reader that made me cry my eyes out. A principle supporting character, which I didn’t see on the chopping block, is murdered by out villain. As this young girl is from the “right side of the tracks”, the police immediately rush into action. I totally understand why this character had to die, since it was extremely pivotal to the outcome of the book. But it didn’t make it any easier for me to read. I will say I loved reading about the strength of Vonnie. Even at one of the most horrific times in her life, she is still trying to figure out a way to take down the person who kidnapped her and get away. Such strength in a time of terror was inspiring to read. I had trouble figuring out the “bad guy” in the Black CATs series, until the last book. I’m happy to say I had the actual villain within my 3 suspects.

Although Cold Sight has paranormal elements, I would say it is more a story of psychological suspense than a paranormal. The romance between Aidan and Lexie was filled with sexual tension and banter and I couldn’t wait for them to finally give in to their attraction. Leslie Parrish gives her readers a roller coaster ride with Cold Sight. Even with the bumps and surprises, I totally enjoyed the ride. I look forward to more books in the Extrasensory Agents series in the future.

The release date for Cold Sight is July 6, 2010, but I've seen online where some people have already seen it on the bookshelves. To read more about Leslie Parrish and her books, visit her website www.authorleslieparrish.com.