A woman trying to rebuild her life.
A man haunted by a past he can’t forget.
But with pasts like theirs . . . you never know when darkness might descend.

Beautifully Broken Control, an all new
unforgettable small-town romance in the Sutter Lake Series from Catherine Cowles, is out now! 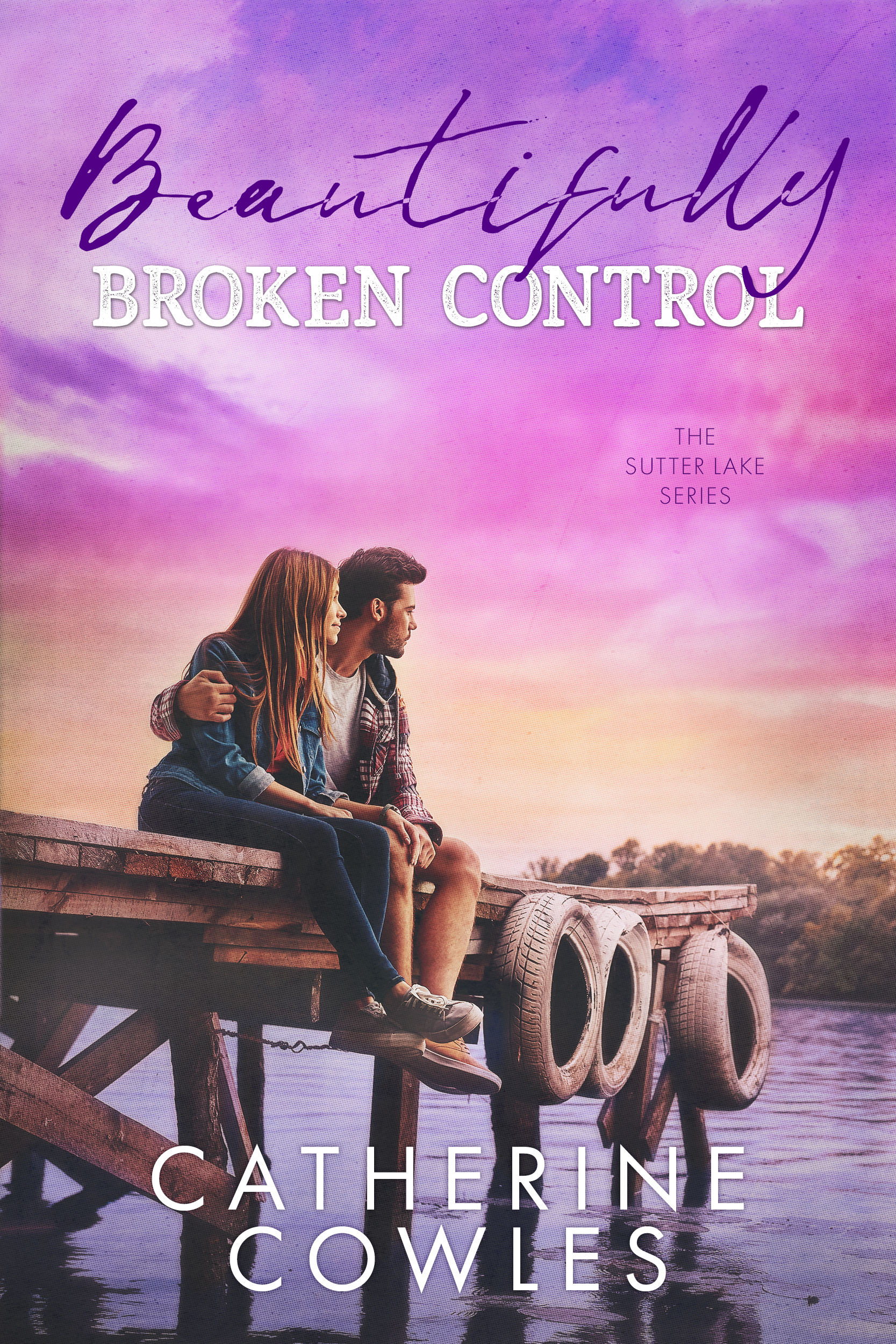 A woman trying to rebuild her life.
Kennedy is doing all she can to escape, to prove that she’s not the monster her father was. A simple life of peace and service is all she needs.
A man haunted by a past he can’t forget.
Cain has buried his demons under layers of control and success. The only thing he needs is his company and his solitude. Certainly not a woman with captivating green eyes filled with ghosts so similar to his own.
He’s a reminder of the life she’s left behind. And she’s a threat to his tightly guarded control. As sparks fly between them, they discover that what they might need most is each other.
But with pasts like theirs . . . you never know when darkness might descend. 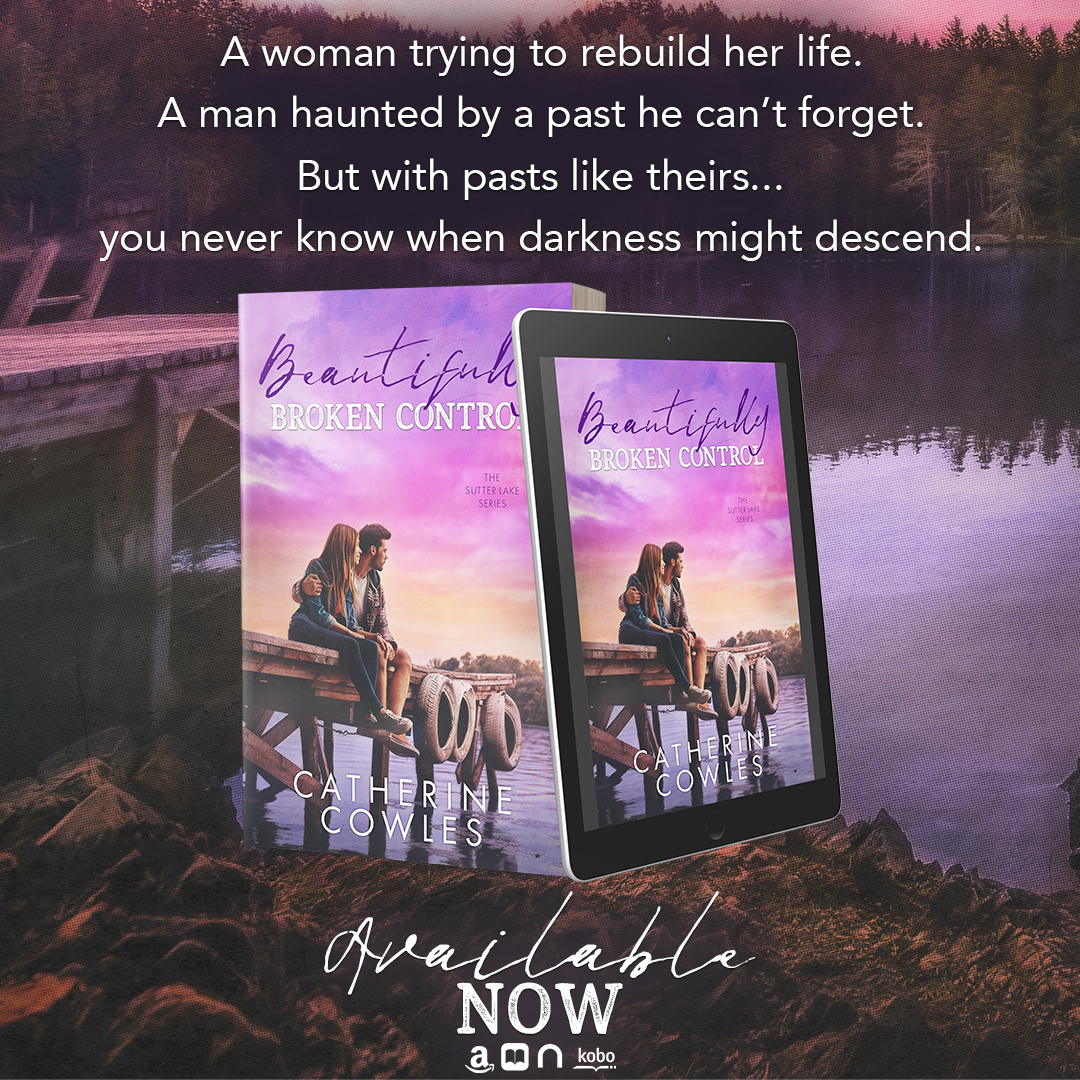 Excerpt:
Faint rays of sunshine still lit the sky as I headed to my SUV, but the air had just a hint of a bite to it. That was spring in the mountains. I glanced at Walker. “Thanks for the warm welcome.”
He gave my back a slap. “Anytime, brother.” He paused with me at my vehicle, looking out to the fields and then back to me.
“What is it?” You didn’t know someone as long as I’d known Walker without recognizing their tells. The little ticks that told you they were worried or angry or, like now, had something they wanted to say but were holding back.
“Kennedy.”
My body began to stiffen, but I forced it to relax. I was the master of giving nothing away, and this situation should be no different. “What about her?”
Walker shifted on his feet. “She’s young.”
“Looks it.” I didn’t know how young, but I’d find out soon enough.
Walker’s jaw hardened. “Be careful.”
I bristled at that. But he wasn’t wrong to warn me off. She had an innocence that radiated from her in waves. And I had no plans to change that, but I was curious. That…something I couldn’t put my finger on kept niggling at me as though she were playing at something she wasn’t. I shook my head and gave Walker a grin. “I’ve got no plans to defile Jensen’s protégé. You can rest easy.”
The set of Walker’s shoulders eased. “Good. You want free and easy, there are plenty of women around here who are down for that, just like you are. But I get the sense that’s not Kenz.”
“Kenz?” The nickname curled around my tongue. It fit her.
“That’s what Jensen calls her, said Kennedy was too formal. Guess it’s catching on.”
I nodded. “I gotta get back to the resort, but let’s grab a drink tomorrow. Hopefully, we’ll be celebrating my closing on that property.”
Walker grinned. “I hope it works out. Shoot me a text tomorrow, and we’ll figure out a time.”
“Sounds good.” I beeped my locks and opened my door, but paused before I climbed in. “Walker?” He paused in his trek back to the ranch house, turning to face me. “I’m happy for you.” The words made a burn take flight in my chest.
The smile that spread across his face was one that could only belong to a man who was a total goner for his woman. “Thanks, Cain. You’ll—” He cut himself off before he could finish the sentence. He knew better than to tell me that I’d find that. “I’m glad you’re here.”
“I am, too.” I gave a jerk of my chin and climbed into my SUV. The drive back to the resort I was staying at a few miles outside of town was quiet. Only the sounds of gravel under my tires to keep me company.
Gravel turned to pavement as I pulled into the resort. I hopped out of my Rover, leaving the door open for the valet. I ignored any polite smiles from fellow guests and staff as I headed straight for my suite.
The familiar itch at the back of my brain was back. Something that said I needed to know more about the girl from dinner. I slipped my keycard into the lock, fingers drumming against my thigh as I waited for the light to turn green. I pushed open the door and headed straight for the safe. Keying in the code, I removed my laptop.
I strode to the desk, setting my computer down and settling into the chair. I opened the laptop, typing in my security codes. I launched a browser and got to work. An hour went by in record time. An hour, and almost nothing to show for it.
I stared at the image on my screen. Auburn hair, freckles dusting the tops of her cheeks and nose, creamy white complexion below, and startling green eyes. There was no denying she was beautiful. Beautiful in a way that would stop a man in his tracks and make him do a whole lot of stupid shit just to get her to turn that smile his way.
But there was also no denying that she was a ghost. The only photo I could find of her was the one on her driver’s license. Other than that one single piece of ID, the woman didn’t exist. No bank account. No credit cards. No lease. No car.
There was nothing else, good or bad, that I could find. Anywhere. While some would say that was a good thing, I knew the truth. It was nothing but bad. People didn’t erase a life unless they had something to hide.
One dinner and I knew my friends were taken by her. It was no surprise. Sarah and Jensen had the most tender hearts of anyone I knew. They were forever rescuing strays, both animal and human. Hell, that’s why I was there, wasn’t it?
But they often didn’t think about the risks involved. Walker used to be good about checking that stuff out, but it seemed Taylor had softened him, made him just a touch less cynical about the world. I was happy for my brother, but it just meant that I needed to look out for the friends in my life who were more like family.
And that’s just what I’d do.

About Catherine
Writer of words. Drinker of Diet Cokes. Lover of all things cute and furry, especially her dog. Catherine has had her nose in a book since the time she could read and finally decided to write down some of her own stories. When she's not writing she can be found exploring her home state of Oregon, listening to true crime podcasts, or searching for her next book boyfriend.


I have loved each instalment in this series. Really loved them! But there was something extra special about this one. I think it has a lot to do with Cain being so broken. He was stoic and steady on the outside, but he was falling apart more and more as time went on. It makes the reader want to save him. And love on him.

Kennedy was the perfect heroine for Cain. She had her own baggage and vulnerabilities, but she didn’t need saving or coddling. While Cain wanted to do just that with her, she pushed him out of his comfort zone as a protector and made him face his demons.

This book has all the ingredients that make me love the romance genre. There’s a ton of angst ( my favourite), there’s passion, and there’s conflict. Catherine Cowles has an amazing ability to put all these things together and create something magical. I was so invested in these characters and their lives. She brought Cain and Kennedy to life, and I could fee their emotions. It was absolutely palpable.

I love the close knit friendships that have evolved over the series. Each character brings something to table to help pull the story together. It always feels like visiting old friends when they’re all on the page together.

This is the last book in The Sutter Lake series, and I don’t know how to feel about that. I truly believe that the author ended things the way it was suppose to. There’s no lingering questions or loose ends. But that doesn’t mean I’m ready to say goodbye to these incredible characters and Sutter Lake. I’ll always want just a little more. I’m greedy like that.