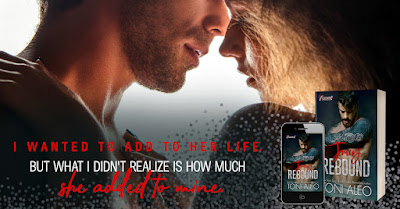 Chandler Moon’s career as a defensemen for the IceCats is on fire. However, his marriage has gone up in flames…literally. He’s resigned himself to the single life and being the best dog dad he can be, but he still holds out hope that one day he’ll find “The One.” So, imagine his surprise when he runs into “The One Who Got Away.”

AKA: “The One Who Is Totally Off-Limits”

Amelia is broken. The punches that life, and her ex-husband, have thrown at her have her down for the count. She’s cut herself off from her family and friends as she works to rebuild her self-esteem and her spirit. Hidden away in a small town, she never expects to reconnect with “The One She Should Have Chosen.”

Chandler is so much more than he was in college: more handsome, more muscular, more tattooed… It was supposed to be a casual fling while Amelia and Chandler worked to put the pieces of their lives back together.


But as every good hockey player knows, a rebound can turn into one hell of a goal.
Posted by mslizalou at Tuesday, January 08, 2019