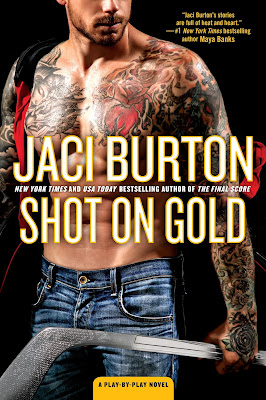 In the new Play-by-Play novel by the New York Times bestselling author of The Final Score, opposites attract when a figure skater and hockey player lace up their skates--and go for the gold...

Will "Mad Dog" Madigan is making his second trip to the Winter Games, and he couldn't be happier. Hockey is his life and playing for the U.S. team is a privilege. Then he meets U.S. figure skater Amber Sloane. She's beautiful, ambitious and driven--everything Will desires in a woman. He would love to show Amber how hot life off the ice can be.

Amber has skated her entire life, sacrificing everything in the hopes of one day winning gold. Now she's competing for the third and final time. She intends to win, and nothing's going to get in her way--until she meets Will. He's an irresistible charmer, and before long Amber is wondering if this sexy hockey player is the perfect guy to show her some moves outside the rink.

But after all the medals have been awarded, Will and Amber will have to decide if what they have together is just a fling or a real shot at true love.

The Play-by-Play series by Jaci Burton is one of my favorite series of books she has ever written. Seriously even 14 books in, I'm still in love with this series. I absolutely loved that Shot on Gold was set during the Winter Games.

I quickly found myself liking both Amber and Will as both individuals and as a couple. Yes Amber had led a pretty sheltered life as a figure skater thanks to her mom, but on her third and most likely final Winter Games, she is there to not only win gold, but have a great time and make friends. I loved that initially Will and Amber were only friends, and it seemed at first even though they were both attracted to one another, they could have stayed just friends if Amber wasn't ready for more. I think that is part of why I loved Will so much from the very beginning. He wanted Amber from the moment he saw her but let her set the pace.

I loved that while Ms. Burton never took anything away from Will and Amber's growing romance, she also did such an amazing job spotlighting so many of the different sports along the way. I feel like athletes really do bond the way she wrote it in Shot on Gold and love seeing each athlete go above and beyond to support their friends even when competing against them. The trash talking between friends also was spot on in my opinion, especially with the hockey players.

I really liked the pacing of Amber and Will's romance. They moved slowly at first, yet once they made love for the first time, they really had trouble keeping their hands off each other. I loved how open Amber was about what she wanted and how easy she and Will were together. They had some smoking hot sex along the way, yet I still felt a bit of sweetness in their relationship as well. I also understood Amber backing away as she did towards the end of the games. I can't imagine the one thing you've spent your entire life doing pretty much coming to an end, at least in the way you've been doing it, and not freaking out about trying to make a new relationship work as well. I didn't agree with how she backed off, but understood her confusion and fears.

Shot on Gold was another winner in the Play-by-Play series. While I loved the fact we usually spend lots of time with the same team members, I also loved the mixing in of the Winter Games in this book. We still saw a few favorite characters from past books, and met some new fun characters among all the friends of Amber and Will. I highly recommend both Shot on Gold and the entire series!

“Yeah? What are your cravings?”
“Hmm, let’s see. Thick crust pizza with sausage and extra cheese. Lasagna. Chocolate chip cookies. Brownies. Oh, and cheeseburgers. I really love cheeseburgers. With onion rings.”
He laughed. “That’s a damn fine menu, Amber. Surely you can have some of those things at least once a week, right?”
“I get healthy proteins, like lean chicken and fish. Only when I finish a competition am I allowed to indulge.”
“Allowed? Come on, honey, you’re a grown-ass woman. You can make your own decisions.”
She looked down at her ice cream, suddenly losing her appetite for its creamy sinfulness. She pushed it aside. “I do make my own decisions. Like now. I’m full.”
Will looked over at her cup. “You barely ate two bites.”
“It doesn’t take much to fill me up.” Which was her mother’s mantra.
Eat half of what’s on your plate, Amber. You’re thin anyway, so you don’t need a lot of food.
Except she was always hungry, and drinking more water never filled her up.
“Yeah? Well I’m eating this entire cone and two scoops, which I know I’ll burn up on the ice. You should do the same.”
Will didn’t understand how hard it was for her to maintain the balance between strength and figure. But she did. She’d worked so hard, and nothing was going to derail her.
Not even the tempting chocolate raspberry ice cream that sat in front of her.
This had been a mistake. She should have never come here with Will. But since she had, she’d politely wait until he finished his ice cream and then she’d make her way back to her apartment.
“Would you like to taste mine?” he asked.
She shook her head. “No, I’m good.”
“So’s this mint chocolate chip. And I promise I don’t have germs.”
Oh, she’d love to put her mouth where he’d had his mouth. That wasn’t the issue at all. Just the thought of swirling her tongue where his tongue had been caused flames to lick along her nerve endings, making her wish they were outside where it was cooler.
“Do you like mint, Amber?” he asked.
“I do.”
He leaned forward, offering the cone. “Take a lick.”
She was going to self-combust if he kept talking to her that way.
“Okay.” She started to take the cone from him, but instead he wrapped his hand around hers and held the cone steady. She leaned forward and flicked her tongue over the top of the cone, watching the way his gaze was glued to her mouth, which only made her previous heated state grow more incendiary.
She sat back and pulled her hand from his. “It’s really good.”
“Yeah, it is really good,” he said, and Amber was certain he hadn’t been talking about the ice cream.
She’d been hit on by a lot of guys over the years, mainly at skating competitions, and especially at the international games. She’d ignored them all to focus only on her goal of winning. Never before had she been affected by flirting or guys coming on to her. She knew she’d be nothing more than a one-night stand, and she wasn’t much interested in being some guy’s forgettable bang.
But there was something about Will Madigan that intrigued her. He was hot, and had a magnificent body. She liked that they were compatible from a skating point of view, but she’d had attractive male figure skaters hit on her before and they had certainly been more compatible than Will, so what was the deal with this guy? Why him, other than she’d madly crushed on him four years ago when he’d never once even looked in her direction.
That was probably it. He’d noticed her tonight, and she felt vindicated. Plus, she was determined to live it up these games.
Though she was going to do it on her terms. She was going to be the one doing the choosing, and it was going to be on her timeline. When she was ready.
She wasn’t going to jump in the sack with the first guy on the first night.
Even if said guy was hot and sexy and had eyes that made her melt.
Posted by mslizalou at Friday, February 16, 2018