THE CHOSEN Q&A IN CINCINNATI 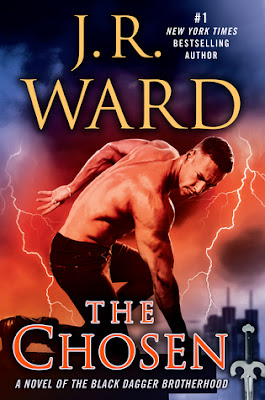 :) ****
Q: Can Fritz get some help?
A: Fritz has an entire staff. The Band of Bastards are going to live in the house. That’s a lot of testosterone.
Q: Will they have enough room for The Band of Bastards?
A: The mansion is huge. They have wings for days in that house, there’s plenty of room.
Q: Is s’Ex getting a book?
A: Yes, he is.
Q: Will the blood slave affect s’Ex?
A: Part of Assail’s book has to deal with the blood slave. It’s going to affect s’Ex’s story.
Q: When will we get more Z?
A: He’s very reserved. So, if I get pictures of him, they’re very limited...I don’t know…Z comes forward when he wants to, but he doesn’t usually want to.
Q: What about Throe’s book? (the book that Throe uses for his spells and power)
A: Devina is using Throe’s stupid-ass book to come back up from the well. She needs a body and a soul to come back.
Q: Did the Scribe Virgin save Xcor?
A: No, it was a hallucination. His mind placed her there in the memory.
Q: The favor between the Scribe Virgin and Wrath…do we get to find out what that is?
A: It will come to light soon.
Q: Will there be any emotional cheating with the Dhestroyer as the prophecy gets closer to being fulfilled. (cheating between V and Butch)
A: Nope, no cheating at all.
Q: Why is Nalla seeing the shadow?
A: Okay, soooo I would say that she has a special skill.
Q: Can Lassiter create a kumbaya moment?
A: I would suggest that given his personality, he wouldn’t even if he can. Given his propensity for conflict, he isn’t likely to do so. He can create situations, but he can’t overcome free will.
Q: Vishous is still taking birds to the Sanctuary. Is he still hoping she’ll be around? Is he projecting issues with his mom?
A: I think he still has some serious f***ing issues with his mother. He has some of the…and I don’t mean this in a flippant way, but he has some Asperger-type tendencies. I don’t know that he’s come to terms with his and his sister’s treatment. The SV isn’t dead…okay….okay….Boo is the Scribe Virgin.
*crowd goes wild*
She has been with them all along, and is with them still. Remember, she’s been in those black robes, and you know how black cats have those light eyes. So, I don’t want you all coming back next year and asking, who knows she’s Boo? The entire time, the Scribe Virgin knew how important Beth would be to the BDB world so she was there when they needed her. But the SV will never return to her original role. But that’s my gift to you and my thank you to you all for coming.
Posted by mslizalou at Sunday, April 09, 2017

Thanks for writing about the questions & answers. I can't wait for Lassiter's book.