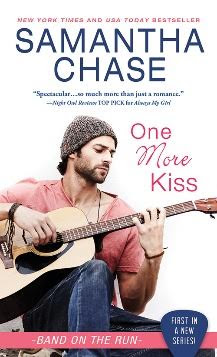 MATT REED IS HIDING
…from his fans
…from his past
…from a failure too painful to contemplate
Most of all, Matt is hiding from himself.

Samantha Chase is a new to me author, but when I was sent the information about her newest release, I knew One More Kiss was right up my alley. I adore the older brother's best friend falling for the younger sister troupe, and Ms. Chase did a great job with Matt and Vivienne's story. As One More Kiss was my first book by Samantha Chase, I wasn't sure exactly what to expect. I love reading a new to me author and then falling in love with their voice.

I love there was a history between Matt and Vivienne, even if Matt only remembered her from when they were kids. Yes, Vivienne was initially a little hostile with Matt, but she soon let that go and I enjoyed watching them become friends. I liked they were friends first before they gave into their attraction to one another. Matt and Vivienne had really great chemistry, and I think they were so good together because they started out as friends.

One More Kiss was a great start to Ms. Chase's newest series. I already know I want to go back and read so many books on her backlist, and I also can't wait to read more books in the Band on the Run series.

Samantha Chase released her debut novel, Jordan’s Return, in November 2011. Since then, she has published twenty more titles and has become a New York Times and USA Today bestselling author. She lives with her husband of twenty-five years and their two sons in Wake Forest, North Carolina.

Carefully, she put the cap back on the bottle and stood. “Okay, maybe I don’t know exactly what you’re going through, but I can see how it’s affecting you. And I know I don’t know you that well, but it doesn’t mean I can’t see what’s right in front of me.”
“Really?” he asked incredulously.
“Yes, really.”
He made a snorting sound and walked away. Vivienne eyed the back door and seriously considered just calling it a night. Clearly she wasn’t helping him in any way, shape or form and was only serving to instigate on an already sensitive subject. Besides, she wasn’t good with confrontations. It was one of the reasons she enjoyed working from home – no drama.
So without a word, she simply made her way across the room toward the door. Her hand had barely touched the doorknob when she felt Matt’s hands on her shoulders as he spun her around to face him. She gasped in surprise. “Matt? What…?”
“What do you see right now, Vivienne?” he asked, his voice low, a near growl.
“I don’t…what do you mean?” There was a tremor in her voice and it was breathy and very unlike her.
He stepped in closer and her back came in contact with the wall. “You said you can see what’s right in front of you. So tell me, what do you see?”
It was a loaded question, she thought. And if she wasn’t careful, she’d blurt out how she saw a sexy-as-hell man who turned her on simply by being in the same room! But there was no way she could admit to that and she knew it certainly wouldn’t help the situation at all.
“I see a man who is struggling with his identity,” she said, swallowing hard.
His eyes narrowed. “Seriously? That’s what you see? That’s all you see?”
There was something in his tone that warned her this was going in a completely different direction than she thought and all she could do was nod.
“Then you honestly can’t see what’s right in front of you.” Now his voice was gruff and so deep and so close that Vivienne almost purred from the sound of it. “Because I’m not struggling – I’m a bastard. I’m selfish. And you know what? I don’t even care.”
She shook her head.
“Trust me. I know what I want, and it’s right in front of me.”
Her eyes went wide as she softly gasped.
And then he pressed against her fully and kissed her.

Posted by mslizalou at Wednesday, February 22, 2017