WITH EVERY BREATH (SLOW BURN #4) 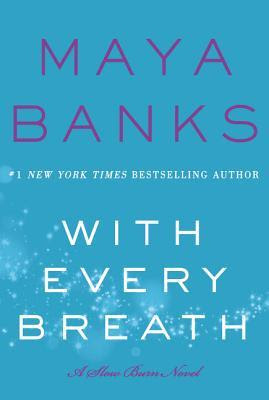 Eliza Cummings fought free of a monster who terrorized her when she was an innocent teenager and helped put him away for good. She took a job with Devereaux Security Services and devoted every hour to taking down the very thing she’d nearly become. No one, not even those closest to her, know her darkest, shameful secrets. But now the killer has been set free on a legal loophole and it’s only a matter of time before he comes for her. Eliza’s only choice is to run and lead the monster away from the people she loves.

Wade Sterling has always lived by his own rules, a law unto himself who answers to no one. He’s never professed to be a good man, and he’s definitely not hero material. Wade never allows anyone close enough to see the man behind the impenetrable mask—but one woman threatens his carefully leashed control. He took a bullet for her and the result was more than a piece of metal entrenched in his skin. She was under his skin and nothing he did rid himself of the woman with the courage of a warrior and who thinks nothing of putting her life before others.

But when Wade sees a panicked and haunted Eliza he knows something is very wrong, because the fool woman has never had been afraid of anything. And when she tries to run, the primal beast barely lurking beneath his deceptively polished façade erupts in a rage. She may not know it, but she belongs to him. This time, Eliza isn’t going to play the protector. She was damn well going to be the protected. And as long as Wade breathes, no one will ever hurt what is his.

Maya Banks' books always bring me a sense of happiness and excitement. She is definitely on my top ten list of favourites. But if I'm being honest with myself, and you, I struggled with this book. Here's why...

Sweet Jesus, this book was slow to start, really slow, painfully slow! I know the series is called, Slow Burn, but this was a bit much. It has never taken me a week and a half to get through a Maya Banks novel...never. But I had to force myself to pick it up and push through. Even when it picked up, just a little, I was still bored.

Eliza and Wade had zero chemistry. I love when the hero and heroine have witty banter and even struggle to get along. But these two constantly threw nasty barbs at each other. Every now and then, I'd get a hint of some sort of attraction, but it was rare.

The first half of the book, maybe a bit more, Eliza and Wade were at each other's throats, and then BAM! They're all "I can't live without you. You're mine. I love you, baby". Normally I can't wait for these words from the characters, but this seemed forced and completely unbelievable.

The love scenes were mediocre at best, mainly because I didn't feel their connection; emotional or otherwise.

This hurts to write this. I have never felt this way about this authors writing. I wanted to fall in love with these characters and their journey to a happily ever after, but I couldn't.

I adored the previous three novels in this series, but clearly, this one fell way short for me. I will read the next book in this series when it's released. But I'm leery now. I don't want to get my hopes up. But I know that will happen, because I adore this author and her writing so much. I'm desperately hoping that this was an anomaly for me. I'm hoping to connect with the story next time. I'm hoping to find that sense excitement again.