Lying in Your Arms 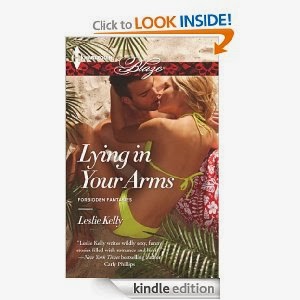 Lying in Your Arms is the newest Harlequin Blaze release from author Leslie Kelly. The mass market paperback release was September 17, 2013 and the digital release is set for October 1, 2013. From the back cover.~

Only a firefighter can handle this blaze…

Madison Reid's engagement is a sham. Her movie-star fiancé is actually her childhood friend…who's gay. When he decides he can't keep living a lie, Madison ends things by leaking a salacious story about a hot—if fictional—affair. Now surrounded by swarms of news-hungry paparazzi, Madison escapes to the beauty of Costa Rica until things cool down….

Firefighter Leo Santori is on his honeymoon. Alone. Still torn up about losing his fiancée to another guy, Leo isn't expecting anything from Costa Rica. That is, until Madison steps into his world, rocks it and then lights it on fire. The heat between them is undeniable—and irresistible. But when Madison's scandalous past catches up with them, will it extinguish the flames…or will they both end up burned?

I was lucky enough to get a review copy through NetGalley thanks to the publisher. Leslie Kelly has been an auto-buy author for me for years, and I was super excited to see we would be back with the Santori family.

I loved Madison and Leo so much. Both are smart and funny characters. Add in the amazing chemistry between them, and I fell for them as a couple pretty much from their first meeting. Let me just say that skinny dipping in your own private pool isn't as easy as one would think in this story. First, Madison walks in on Leo when she is given the wrong room key and when Madison tries to skinny dip in her pool later, there is a huge snake in the pool. I'm betting Madison screamed almost as loud as I would have screamed, yet I still found myself laughing like crazy at both skinny dipping attempts.

I expect a certain level of sexy from romances by Leslie Kelly. Let me just say she more than delivered with Leo and Madison's story. Their attraction was instant and only got stronger with each time they made love. Lying in Your Arms is full of super sexy times and I loved watching Leo and Madison fall for one another. Of course, Madison's fictional affair comes to light right at the wrong time. I was so mad at Leo for not getting it wasn't true, but also understood after what he went through with his ex-fiancee. Leo is one of those characters I love so much, yet want to smack for not seeing what is really going on. Leo and Madison were able to reconnect and only made me love them more as a couple.

Madison and Leo's story made me want to go back and re-read all of the Santori books again. I was very excited to read we will be getting more of the Santori cousin's stories from Ms. Kelly.

Posted by mslizalou at Saturday, September 28, 2013