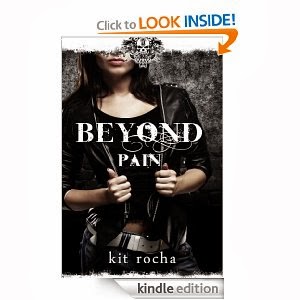 A woman with no future…

Live fast, die young--anything else is a fantasy for Six. She’s endured the worst the sectors had to throw at her, but falling in with Dallas O’Kane’s Sector Four gang lands her in a whole new world of danger. They’re completely open about everything, including their sexuality--but she hasn’t survived this long by making herself vulnerable. Especially not to men as dominant as Brendan Donnelly.

A man without a past…

In Bren’s arms, Six is finally free to let go. But his obsession with the man who made him a monster could destroy the fragile connection they’ve forged, and cost him the one thing that makes him feel human--her love.

The Beyond series is one of my favorite series I've read. I'm so thankful I was able to get an ARC from the authors of Beyond Pain. The release date was August 22, 2013.
I loved Bren from the very beginning and knew he was the right guy for Six once they met. I love them both even more now. Part of what I love about the Beyond series is the fact that everyone is so open about everything. No one makes any excuses for their choices either. Six came from a sector where men used women and didn't mind hurting them. O'Kane's Sector Four is a huge shock to her system. Bren and Six together almost melted the screen on my kindle. OMG the smoking hot sex whether they were actually having it or watching others was awesome!
Not that it is an easy path for Bren and Six. Both have trust issues and Bren pushes Six to the limit. I'll admit I still love Bren, but he pissed me off royally and I was so glad to see Six was stronger than I gave her credit for to that point.
The Beyond series has some of the hottest, dirtiest sex scenes I've ever read, and yet as soon as I finish reading one of the books I want the next one or to start back over from the very first book in the series.

Posted by mslizalou at Thursday, September 26, 2013