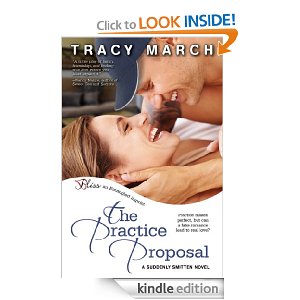 The Practice Proposal (Suddenly Smitten #1) is the newest release from Tracy March. The publisher is Entangled: Bliss and the release date was March 11, 2013. From the back cover.~

Liza Sutherland isn’t looking for love. Not from a charity-auction date she didn’t even bid on and especially not with Nationals first baseman Cole Collins, the guy she obsessed over as an awkward teenager. She won’t get involved with a notorious player, no matter how attractive Cole is.

Cole Collins is up for contract renegotiation, but after too many late-night parties, he’ll need some positive publicity before he can make the roster. His agent, Frank, pitches Liza as the perfect prop…only Cole didn’t account for Liza no longer being just a teenager with a crush. She’s gorgeous and smart and he’s instantly hooked.

When Frank makes Liza a deal she can’t refuse—a bet she will fall in love with Cole or a cool half mil goes to charity—the game is on. But neither bet on the real feelings that surface. Could a fake fling turn into an official forever?

I got a review copy from NetGalley thanks to the publisher. The Practice Proposal is the 1st book in the Suddenly Smitten series.

I really enjoyed The Practice Proposal very much. I’m a huge fan of sports romances and add in a friends-to-lovers storyline, and you have me hooked. I fell for Cole pretty quickly. Knew his bad boy image was probably overstated and just knew the real Cole would come out if he met the right woman. When Liza Sutherland entered the picture, I knew Cole had met his match. I loved that his agent, Frank set Cole and Liza up to date temporarily to help Cole secure his next contract with the Nationals. When Cole miss-steps on their first date, Frank makes Liza an offer she can’t refuse. He will give her charity $500,000 if she can date Cole until the end of baseball season without falling in love with him. I have to say I loved that Cole plays for the Nationals and Liza’s parents have ownership in the Orioles.

Cole and Liza had known each other as teenagers and the connection was still there all these years later. Cole had a bit of a challenge with Liza, as her fiancé had passes away 2 years ago, and she was convinced she wasn’t ready for another relationship anytime soon. Cole won me over completely when he was smart enough to look into Liza’s fiancé and let her openly talk about him. Really loved how sweet he was as he helped Liza move on with her life. Cole also needed Liza when he discovered a truth from his past. Cole had never known who his father was, and as a teen, Liza’s parents had always treated him like family. When he graduated from college, he lost contact with her parents and thought it was something he did wrong. Liza is there when he finds out what really went on and help him deal with the truth.

Cole and Liza had amazing chemistry and I loved watching them fall in love. Of course secrets have a way of coming out at the worst time. Both Liza and Cole have to decide if they love one another enough to get past the hurt from the secrets. Luckily they both have family and friends to help talk through so they each can see the truth. I absolutely loved Liza’s best friend Paige, and really hope we get her book in the future.

The Practice Proposal was my first book from Tracy March, but it won’t be my last. I love her writing style and really hope she writes more sports romances in the future. I’m a huge fan of sports, but baseball holds a special place in my heart since I grew up watching games with my mom. For more information about Tracy March, check out her website.