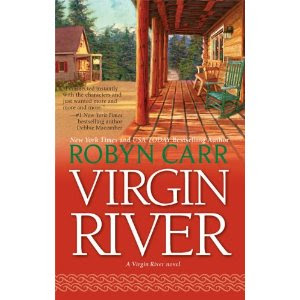 My friend Paula has been suggesting Robyn Carr’s Virgin River series almost from the minute we started talking on various blogs. Before we met at RWA last July, she had invited me to go to the Jack’s Bar luncheon with Robyn. I had started reading Robyn’s Grace Valley series, but hadn’t finished it yet, nor had I started the Virgin River books. Right before JR Ward’s Lover Unleashed came out in March, I decided I wanted to take a break from paranormal books until Lover Unleashed came out, so I decided to start on the Virgin River series. I have to say thank you again and again to Paula for introducing me not only to Robyn, but also to her books.

I’ve now read the first 5 books in the series and was hooked from the minute I started reading. I loved Jack from the moment he appeared in Virgin River. I love Jack and Melinda together and love getting to see how they are doing in each of the books in the series. Paula told me I would soon fall for Preacher when I read Shelter Mountain, and she was so right…once again. Preacher “John” and Paige are so sweet together and there is just something about watching a big bear of a man fall totally and completely in love. Next up was Mike and Brie in Whispering Rock. I almost felt sorry for Mike, since Brie is Jack’s baby sister. However, Brie had no problem letting all the men in her life know what she wanted. Brie had survived an assault and rape and with Mike’s love she came back stronger than ever before.

Next up was A Virgin River Christmas. We once again get to see all our favorites from the Virgin River series, and get to meet Marcie and Ian in this book. According to Robyn’s website, it is the 4th book in the series, but I really think it is more of a stand-alone book.

The 5th book in the series is Second Chance Pass. Paul had been in love with Vanni from the first moment he saw her. However, his best friend Matt asked her out first, so Paul stepped aside and hid his feelings for his best friend’s wife. After Matt dies in combat, Paul hangs around to help Vanni get through the birth of her son. Of course, Paul still feels guilty about his feelings and it takes Vanni going out with another man to get him moving. I absolutely love Paul and Vanni and can’t wait to see what the future brings for them throughout the series.

I love this series so much and am so glad I finally listened to my friend Paula. I have all the books in the Virgin River series in my TBR pile and am playing catch up. I’m at book 6 and there are currently 15 books in the series, so I’ll get to spend a good bit of time in Virgin River over the next month or so.

The Virgin River Books are awesome! Wait until you meet the Riordan boys, oh baby!!!