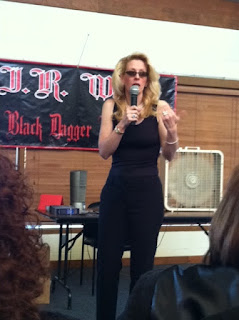 Last night my cousins and I spent several hours with lots and lots of BDB fans. We all arrived at least 2 hours before the WARDen was scheduled to appear and had the best time talking about the brothers and what we all thought would happen next. She signed over 1,300 books for the virtual signing. She signed over 600 books at the book signing last night. My cousin Gina took lots of notes at the signing last night and I typed up everything.

The next BDB book will be Tohrment’s book. She is worried about messing it up, but feels it’s time.

We will get Qhuay’s book!!!! It will be a novella, but she didn’t tell us when it will be released. Still needs to write novellas for Rhage & Mary/Wrath & Beth and Tohr’s book. Qhuay’s book will be only about Qhuinn and Blaylock. No world building will happen in their book. Will be more about the romance like in early books. There will be lots of man loving going on and she will not hide anything behind closed doors. Putting in a novella so those who don’t want to read about man-love can opt out of the book without missing anything related to action in the series.

Does Lassiter get a book? Absolutely he gets a book. Not sure if it will be BDB or FA at this point.

Does Throe join the BDB? He’s a little busy right now working with Xcor in his “Band of Bastards”. Too much conflict (she really like Xcor).

Muhrder will be in books soon. Also, he and Xhex have more in common than Xhex knows.

Novellas for Rhage & Mary/Wrath & Beth – She has 40 pages to finish up Rhage & Mary and still needs to write Wrath & Beth’s story. Both novellas will be in one book.

Is Layla going to be with one of the brothers? “No comment” per her people.

Who does Tohr end up with? She wouldn’t answer, but from the last signing, everyone around me thought it is No’One.

Where does Lassiter come from? She is waiting about answering for now.

How easy was it to write V in Lover Unleashed? It was surprisingly easy to write him this time.

Is V going to talk to the Scribe Virgin about Payne? The WARDen was a bit curious about what would happen to the SV. She took a very “I don’t know” about where the SV was going.

When asked about Rhev & Symphaths, imagines Symphaths will become a threat again. Should see more of them in the future.

Butch & Manny’s father – she imagines it will be revealed eventually.

Is Qhuinn’s brother still alive? Yes, but not too happy or healthy.

Why don’t you and V get along? Once again said she should never have revealed about not getting along. Will never tell full story.

Do JM and Mary still have a close relationship? Yes. There are just so many people in the world now, there is no way to show every interaction.

Asked about Qhuinn’s vision and would not tell anything because it would give everything away.

Any new young? The novellas about Rhage & Mary/Wrath & Beth will show more young.

Will there be more interviews? She wants to get a few book books written before doing another Insider’s Guide.

Can Payne regenerate Wrath’s eyes? Unknown if she can or not. Depends on how his eyes were lost. If they were lost due to a degenerative eye disease, it’s possible. Cannot re-grow limbs or eyes.

Is the Old Language based on anything? Not really. She had a tattoo artist come up with the symbols for the language.

Once again asked about coffins and told us she knows why they are there and told us to keep reading. Her assistant would not let her tell us anything.

Are the characters based on anyone in real life? No! Just images that appear in her head and they are never quiet.

Does JM ever discover he is Darius? No, part of the deal with the SV was to not remember that part of his life. Xhex has her suspicions. There will be a lot of JM in Tohr’s book. J

Will there ever be a novella about Butch and V? No. Be happy with the book for Qhuay!

Will there be a Blay/Qhuinn/Layla thing? Keep reading!!!

How do unmated males and females feed? There tends to be non-sexual relationships. Always with witnesses.

How does V maintain the mist around the compound when he leaves? Much like a spell

Asked who she hears in her head when Z sings and she said he sounds like The Three Tenors’ Pavarotti, just a little less warbling.

Who is the leader of the Glymera? We will see in the next book. Things are very different right now.

Will Payne and Manny have a child? Yeah, probably.

Will Phury do his job? No, he is very happy with Cormia. (one word: Trez)

Will the Training Center reopen? Need to be more vamps in Caldwell, but females may be in BDB, Xcor’s group is very effective, so things may seriously change – whole basis of the war will change.

Will the SV face consequences for birthing twins? Keep reading

Is Veck a potential brother? No, he is the hero of Envy, the next Fallen Angel book.

Is Throe related to Rhage? She started plugging her ears as soon as she was asked who Throe was related to and wouldn’t answer.

Does she have any ink? “I’m really not cool enough to write these books.” Not really.

Will more vamps show up from other places? Keep reading

Who is the next shellan to go into her “needing”? She was not allowed to answer.

Who is Xcor’s father? We will learn more later. He has an amazing back story.

Will Michael(from Story of Son) show up? Unknown if they will cross

Will Wellsie ever come back? No. Wellsie is in the fade with their son and she won’t leave him, even for Tohr.

Who feeds Payne? Payne kinda self-sustains both herself and Manny.

V & Payne each have a glow much like a yin-yang. V destroys and Payne heals.

Will Trez and iAm have books? Absolutely, but unsure when they will happen or how they fit in the series yet.

Will Throe’s history play into books? Probably, but unknown when.

How many more books will be in the series? Pretty much open ended depending on the readers, inspiration, and her health.

Qhuinn is trying to re-invent himself right now. Asked if he will ever put his hardware back in and the WARDen said the holes are still there. Everything is still below the equator, which is funny since he is now celibate.

Asked the name of the 3 cousins and she wouldn’t give their names. However, she does love Zypher.

I love all this great news! A big thanks to you and your cousin for sharing with us! :D

Great recap! OMG yes for straight up Qhuay man love! And the fact that Qhuinn has his piercing down below has my imagination running wild when he and Blay have their own sexual healing going on.

That was wonderful! Thanks for taking all the notes and sharing!

Had to share with all my BDB lovers! FYI, Payne sustains Manny not with blood, but with her glow when they are together "biblically" per the WARDen.

Thanks for doing this. Wish the Warden would give us more info... Great news about Qhuay, the novella better be big...

Holy crap!! That was awesome!! Thank you. Xoxo

Thank you so much for sharing!Exciting times...I'm kinda crushin on Xcor & Throe ;-)

Thank you so much for sharing!!!! I've been waiting for some updates to come through from Saturday - this is AWESOME! :)

Thank you SO much! You both are made of teh awesomesauce!! :)

I shall read this over & over again without pause.

Thank you so much for writing this recap! As someone who might never be able to go to a JR Ward signing, I really appreciate it! :D

woohoo!
thanks sooo soooo much!

Thanks so much for all of the info! It has cleared a few things up in my mind (V & Payne ying yang...duh! How did I miss that?). Plus the news of the novella for Qhuay! AWESOME! I hope that novella is a long one!

I read this when I shouldn't have and I spoiled the hell out of myself. But thank you for posting the news. I'm jealous that you got to go and hope you had a wonderful time! :)

I had to wait to visit this post until I could sit and really pay attention! You are fantastic, Liza!! Thank you SO much for capturing ALL of this for us!!!!

Wonderful recap of the signing. I'm thinking of going to her August signing upstate. We'll see how it pans out.

I haven't been that excited about the Black Dagger Brotherhood for a while now though. It makes me sad. I wrote a whole post on it, in my blog. So much seems to be missing to me, lately. Almost as if J.R. Ward needs a breather, you know?

Lover Unleashed to me, felt like Lover Unbound 2 and that Payne & Manny were sub plots, instead of being front & center in their own story. Sucks.

I'm totally looking foward to the Qhuay Novella though!!! I love them.

I really think you had to have a good bit of focus on V for this story. I really wish he had gone to see his mother and confronted her about hiding his twin sister for all these years. I've known that Manny would be back for sometime. After we met Payne I figured that would be his mate. The WARDen let it slip that Butch and Manny had the same father years ago. Wish we had found out more about their father.

I will say when the WARDen confirmed we would get Qhuay's novella everyone in the building cheered. More so when she said nothing would be behind closed doors. I just hope it comes out sooner rather than later.