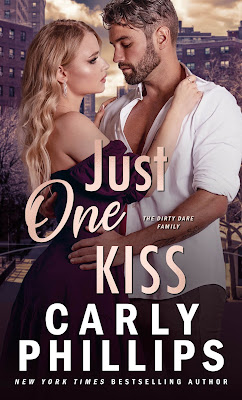 It was supposed to be one fun night of hot sex.
It turned into a second. Then a third.
Now Mother Nature is having the last word—with a secret baby surprise!
Jade Dare has done everything in her power to overcome her mother’s unstable influence. Changed her name. Became a success. Vowed never to risk passing on the potential for inherited pain. What has it gotten her? One fiancé who wanted her for money. A second who cheated on her with his brother’s wife.
Now she's sworn off men. Or at least off serious relationships. But when the chance to indulge in a one night stand with a man she’s secretly fantasized about arrives, she jumps in. Only to land heart-first into a case of the feels she can’t bring herself to trust.
Knox Sinclair always suspected he liked his brother’s fiancé a little too much, that’s why he kept his hands to himself. But with ties broken and Jade all too willing, a no-strings-attached night sounds like a damned good idea.
Except one night isn’t nearly enough. But while Knox is busy convincing Jade they have a chance at forever, the past is planning one last parting shot.
Release Date: August 16, 2022
CP Publishing
Kingston Family #6
Contemporary Romance
Review copy provided by publisher
Liza’s Review:
Just One Kiss is the newest book in the Kingston Family series from Carly Phillips. I’ve wanted Jade’s book from the moment we met her, and it was so worth the wait!
Jade Dare is on a man fast. She has been burned by 2 different fiancées and has no desire to have a relationship at this time. She is totally focused on her job and making sure she doesn’t suffer from the same mental health issues as her biological mother. When she sees Knox and Holly again for the first time in a while, she doesn’t hold their brother Theo’s actions against them.
Knox Sinclair was attracted to Jade, even when he was married and she was engaged to his step-brother, but would never act on said attraction while they were both in a relationship. When Knox goes with his step-sister Holly and sees Jade again, he is smitten and insanely attracted once again.
I loved both Knox and Jade so much. Jade is such a strong woman, even though she struggles with the fear of inheriting her mother’s mental illness. It broke my heart that she carried that fear with her for much of her life. Knox was one of the best heroes Carly Phillips has ever written. OMG I loved him from the moment he appeared upon the page. He loved his step-sister like she was his own sister, and protected those he loved with everything in him.
The chemistry between Knox and Jade was smoking hot, and I loved them together from the moment they saw one another again. I loved they just got one another, and I fell more in love with them as a couple the more time they spent together.
Just One Kiss hit all the boxes for me, and is absolutely one of the best books I’ve read this year. As always, Ms. Phillips writes a story filled with love, laughter, family, and drama that keeps me pulled in from the very first page. I can’t wait to read the next installment in this fantastic series!
Rating: 5 Stars (A+)
Posted by mslizalou at Wednesday, August 17, 2022