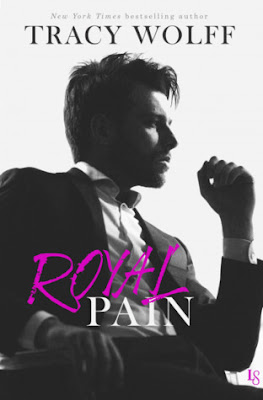 He’s a womanizer. He’s cocky. He’s not exactly a prince. Only he technically is. Meet your new royal obsession in this addictive novel from New York Times bestselling author Tracy Wolff.

Being rich opens a lot of doors. When you’re rich and royal, those doors lead to a new bedroom every night. I should know. The tabloids call me His Royal Hotness, Prince Kian of Wildemar. Women across the world see me as a naughty fairy tale, an image I’m happy to indulge. As the spare to the heir, I’m the prince with none of the power . . . and all of the perks.

Then my twin brother is kidnapped, and suddenly I’m the one who could be king. The crown chasers start circling—and yet it’s a luscious waitress who catches my eye. With a smart mouth and the curves to back it up, Savannah Breslin is as brazen as I’d expect an American commoner to be.

But Savvy’s not interested in playing Cinderella. As sexy as she is, she’s no stranger to heartbreak. Besides, a nice guy wouldn’t drag her into all the drama that comes along with royalty. Lucky I’m not a nice guy. And, as it turns out, I might not even be her first prince. . . . 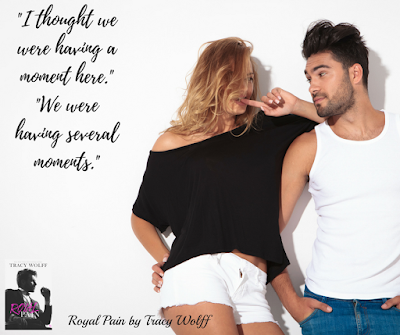 “What if I promise to stay in view of the windows the whole time?” I tell them. “I’ll park myself right there in front of that one and you can make sure I’m safe.”

Lucas looks like he wants to argue, but I cut him off before he can even start. “Come on, man. You’ve got to give me something. I like this woman.”

He sighs, but in the end—above the very vocal protests of the very serious Avery—he nods. “In sight the whole time,” he orders and for a moment I feel like a junior high kid on his first date.

But beggars can’t be choosers and I know, better than most, what a disaster it would be if something happened to the spare three months after the heir disappeared. Wildemar would be in absolute chaos. There’s no way I’d put my country through that, girl or no girl.

“I promise. And if I disappear from sight for more than five seconds, you have my permission to come crashing in after me.”

“I think you’re forgetting,” Niall says with a narrow-eyed look, “we don’t need your permission.”

“Yeah, well, someone in this relationship has to be.”

“Aww, Niall.” I slap his ass with my free hand on my way by. “Don’t you know it’s more fun when everyone’s having a good time?”

Lucas snorts and Avery sounds like he’s strangling on his own tongue. I can’t help grinning as I make my way to Savvy’s front door. Maybe it won’t take as long to break in my new bodyguard as I was afraid of.

I can hear music through the open windows, Shakira’s “Hips Don’t Lie,” and I can’t help thinking about the way Savvy’s hips looked in her black work pants. Can’t help wondering about what she’s wearing now—and whether or not she’ll let me get another good look at her luscious, heart-shaped ass.

At least she’s home, I tell myself as I knock. While I knew she wasn’t scheduled to work, I was afraid she might be running errands or something.

She’s at the front door in seconds, her big brown eyes wide and inquiring . . . at least until her gaze meets mine. “What are you doing here?” she demands.

“Wow, way to make a guy feel welcome.” I hold the flowers out to her. “These are for you.”

“Thanks, but I’m allergic.” She starts to close the door in my face, but I get a foot wedged in before she can shut it completely.

“No.” She studies the blooms for a couple of seconds before snatching them out of my hand. Then she really does close the door and I’m so surprised I don’t do anything to stop her.

Behind me Lucas, Niall and even Avery are full-on laughing now. In fact, I’m pretty sure the only thing keeping them from absolutely annihilating me is the fact that I am still their prince. That somehow only makes it worse.

Gritting my teeth, I ignore them (and try not to remember the good old days when I could have had them banished to the dungeon) as I lift my hand to knock again. But before my knuckles can even meet the wood, the door flies open again and Savvy is standing there, smiling hugely at me.

“I’m just messing with you,” she says as she pulls me inside. “But I have to say, your expression was priceless. Is that the first time a woman’s ever shut the door in your face?”

“I figured. But hey, now you can cross it off your bucket list. Every guy needs to have the experience at least once, don’t you think?”

“I think I was good without it ever happening, actually. Definitely didn’t feel like I was missing anything.”

“Maybe not,” she concedes. But then she grins and it’s so wicked, so wild, that I can feel it all the way to my bones. “You’ve got to admit it was funny, though. God, if you could have seen your face.”

“I’d rather look at yours.” The cheesy line pops out of nowhere and I’m not sure which one of us is more shocked. Shit. What the hell is happening to me? Savvy throws me off balance just by breathing, and I don’t have a clue what I’m supposed to do to stop it.

Or even if I want to stop it. God knows, every time she opens her mouth—or closes a door in my face or spills a glass of champagne on me—it only makes me hotter. Only makes me want her more. There’s something about how she’s always doing the unexpected, always surprising me, always challenging me, that turns me on in a big fucking way.

And I know I’m not the only one, know the heat isn’t only on my side. I’ve been with enough women in my life to know when one’s attracted to me, and Savvy is, even if she doesn’t want to be.

Half of me wants to push on that a little bit, wants to see where it’ll take me if I get in her space right now. But the other half doesn’t want to risk it, not yet. Not with this woman who is a lot of things, but definitely not predictable.

Besides, I’m pretty sure my time allotment is reaching its upper limits, and I don’t doubt that Avery will come crashing through the front door in about thirty seconds if I don’t get where he can see me.

“Do you want some lemonade?” Savvy asks as she starts walking toward the kitchen.

“I’d love some. But do you mind if I hang out here while you get it?” I take a few steps to the left, making sure to line myself up directly in front of the window.

She turns to me, eyebrows raised, and I figure I might as well own up to the problem. “My babysitters like to keep an eye on me at all times,” I tell her as I point out the window.

She glances from me to where Niall, Lucas and Avery are standing on the sidewalk in their suits, eyes trained on me—and her.

I expect her to be a little annoyed—most women who aren’t crown chasers usually are—but Savvy just laughs and waves. “I’ll pour five glasses of lemonade,” she tosses over her shoulder as she makes her way to the kitchen. “Get comfortable and I’ll be right back.”

From another woman, the invitation to get comfortable would mean she’s down to fuck, but I’m pretty sure Savvy just wants me to take a seat. More’s the pity. 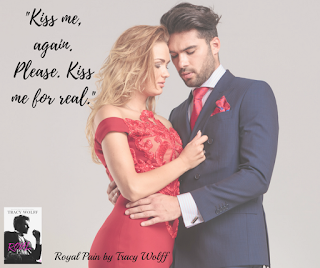 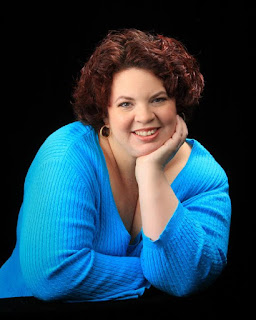 Tracy Wolff collects books, English degrees and lipsticks and has been known to forget where—and sometimes who—she is when immersed in a great novel. At six she wrote her first short story—something with a rainbow and a prince—and at seven she forayed into the wonderful world of girls lit with her first Judy Blume novel. By ten she’d read everything in the young adult and classics sections of her local bookstore, so in desperation her mom started her on romance novels. And from the first page of the first book, Tracy knew she’d found her life-long love. Now an English professor at her local community college, she writes romances that run the gamut from contemporary to paranormal to erotic suspense.

And for all of those who want the unedited version:
Tracy Wolff lives with four men, teaches writing to local college students and spends as much time as she can manage immersed in worlds of her own creation. Married to the alpha hero of her dreams for twelve years, she is the mother of three young sons who spend most of their time trying to make her as crazy as possible.


Royal Pain is the first book in the His Royal Hotness series from Tracy Wolff. Prince Kian of Wildemar is the spare, as his twin brother was born first. However, when his Crown Prince brother Garrett is kidnapped, Kian must step up as acting Crown Prince while everyone waits to hear of Garrett's fate. I loved that Kian owned his playboy ways, but totally stepped up to help his country when the need arose.

Savannah Breslin probably was my favorite character of this book. She is a smart and sexy and knows what she wants out of life. I love how strong she was, yet also had a bit of vulnerability to her as well. I will say I had a bit of an issue with the fact that she had dated Garrett years ago before and had an intimate relationship with him. It might just be me, but I found it strange that she had a sexual relationship with both brothers. I will say I did love Savannah (Savvy) and Kian together, but it put me off for a bit originally. I found myself actually wanting them to find a way to make things work between them, as they had a sweetness and steaminess to their times together that totally worked for me.

I loved the element of suspense behind Garrett's kidnapping and search for him. I also really loved the fact that Kian was willing to go up against anyone to make sure they didn't give up on Garrett. I loved the twin thing between Garrett and Kian and how strong it was both during the kidnapping and after Garrett returned. I loved that Kian and Garrett got each other in a way no one else really did.

Royal Pain was a very enjoyable story, though it did move a bit slowly at times. I really liked Kian and Savannah's story and can't wait to get Garrett's story next. I can't wait for Garrett to prove how strong he really is when we get his full story. 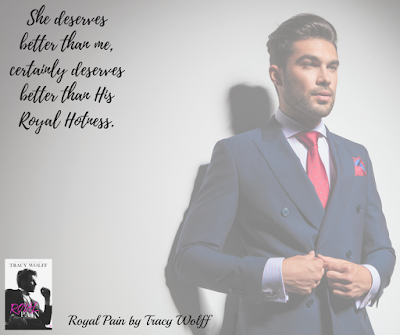 Posted by mslizalou at Tuesday, September 26, 2017