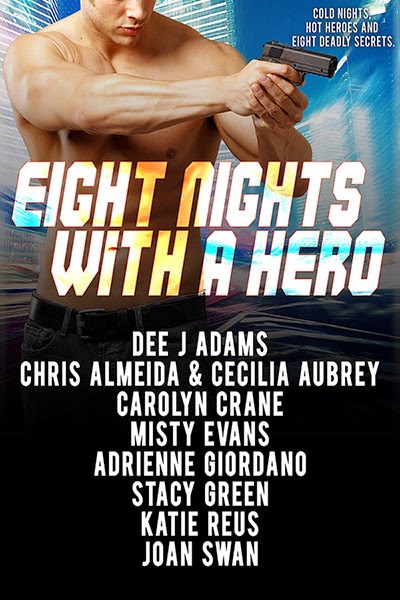 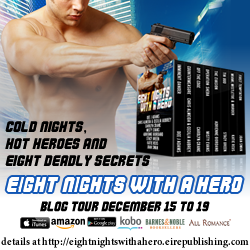 Snuggle up to 8 riveting Romantic Suspense stories involving 8 Hot Heroes from all walks of life who will do anything to protect those they love.

“…Between the sweet and steamy romance and the heart-pounding (literally) suspense... It was such a thrill…"

“Amidst the heartwarming and beautifully written love story was a very cleverly and intelligently constructed suspense and mystery.”

"Off the Edge is such a well-crafted romantic suspense story. Full of action and sparkling chemistry between Laney and Peter, this book is so much fun to read."

"Evans takes readers on an edge-of-your-seat thriller into the secretive world of CIA operatives. A love triangle and a mole in the agency make this one story you won't want to put down."

Adrienne Giordano, USA Today Bestseller
THE EVASION (Justifiable Cause Series Book 2) - The World Of Knock-Offs Isn’t As Frivolous As It Appears.

Stacy Green, Best Selling Mystery and Thriller Author
TIN GOD (Delta Crossroads Series Book 1) - The Truth Can Be As Deadly As Any Weapon.

“Stacy Green has written an emotionally charged, thought-provoking and stunning mystery/suspense that will capture and hold you hostage until the last page is read.”

“Well written and a beautiful addition to an interesting series, Miami, Mistletoe, & Murder is a great read to keep you warm on a cold winter’s night.”

“I love Joan Swan's writing as even in a novella she manages to capture the heart of her characters.” 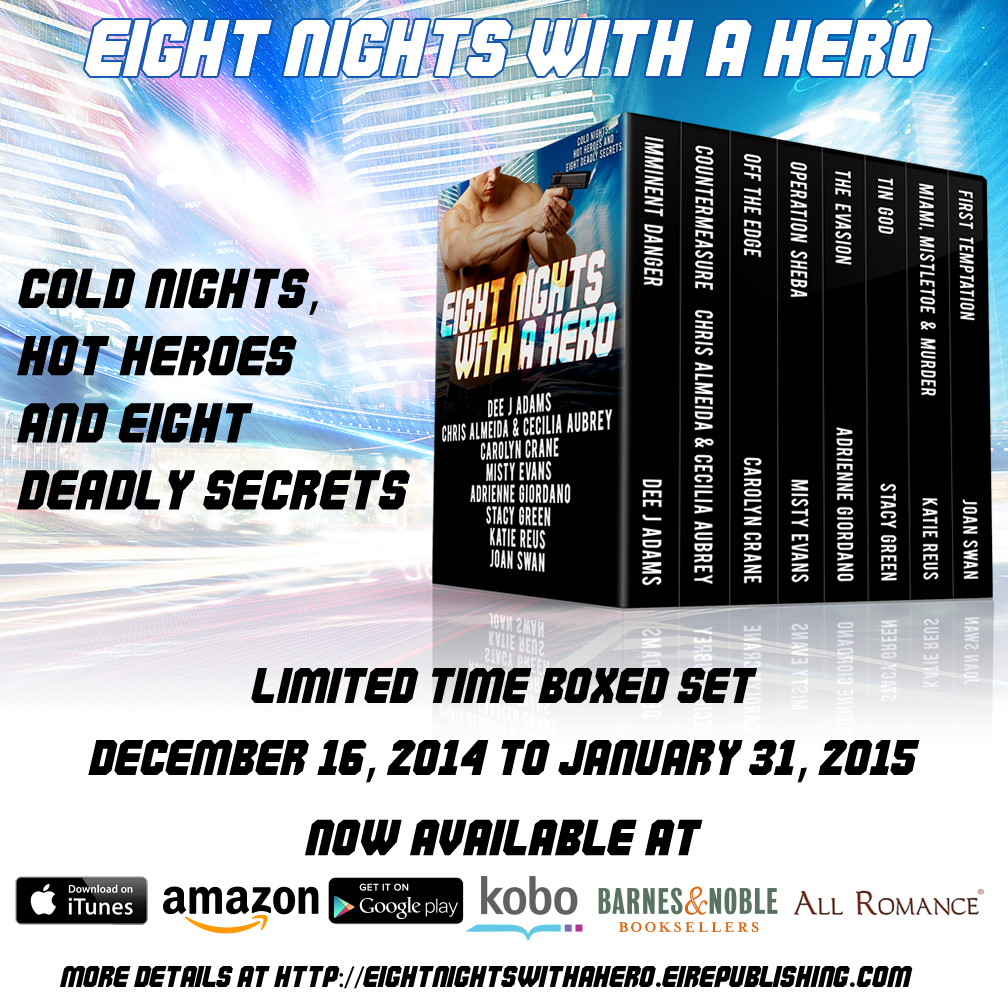 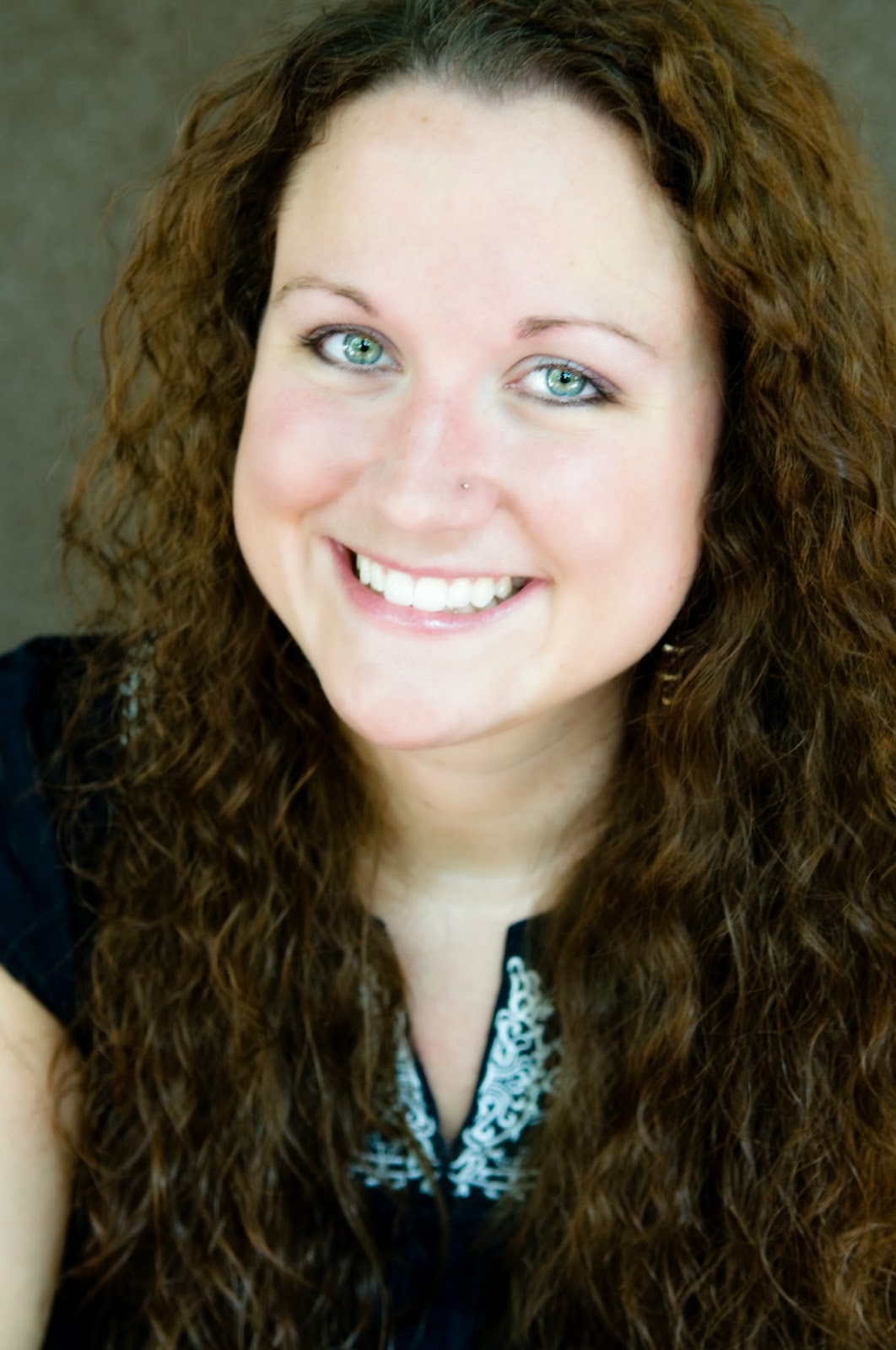 Katie Reus is the New York Times and USA Today bestselling author of the Red Stone Security series, the Moon Shifter series and the Deadly Ops series. She fell in love with romance at a young age thanks to books she pilfered from her mom’s stash. Years later she loves reading romance almost as much as she loves writing it. However, she didn’t always know she wanted to be a writer. After changing majors many times, she finally graduated summa cum laude with a degree in psychology. Not long after that she discovered a new love. Writing. She now spends her days writing dark paranormal romance and sexy romantic suspense.

Fierce and sexy, former Marine Travis Sanchez has always held himself back from the rest of the world, using his tattoos and piercings as armor. But when the woman he’s wanted for months is threatened, he knows it's time to strip away the bad boy image and show her just how much he wants to be with her. As one of Red Stone Security’s best contractors, Travis is trained for almost any situation. But nothing prepares him for the most dangerous threat of all: the one to his heart.

Kind-hearted Noel Baskov’s only wish for the holidays is that her Miami coffee shop has a successful Christmas season. But her focus on work is interrupted when the family of the young girl she mentors is threatened, and the man she’s been lusting after for months steps in to handle it. Unfortunately the danger is far from over. Can this sexy and mysterious warrior protect Noel, or will he be the one to shatter her heart?

It was nearing six, which meant she’d be closing soon so Travis picked up his pace. He passed a few people on the street, all of them bundled up wearing hats and coats, an odd sight in normally sweltering Miami. As he neared her shop, he slowed down and forced himself to get his shit together. For all he knew, she wasn’t even working. Before he’d reached the door, Noel of all people, walked out. Carrying an oversized purse and looking at her cell phone, she didn’t even glance up. He tried to move out of the way but she slammed into him.
Her purse slid off her shoulder as her head snapped back. Wide eyes met his and her mouth formed a small ‘O’ as he steadied her. He gently held her upper arms as she stared at him for a long moment. She was slender, but not exactly fragile. There was a subtle strength he’d picked up on the first time they’d met.
“Travis.” She practically breathed his name. It was like a seductive caress, but then she shook her head and that’s when he realized her pale eyes were bright with unshed tears.
He automatically tensed, hating to see any woman cry, but especially her. “What’s wrong?”
Glancing away from him, she shook her head and bent to pick up her purse.
Kneeling with her, he started gathering some of the things that had fallen out and nearly choked when his fingers wrapped around a box of condoms with a red bow wrapped around it.
“Oh my…that’s not…well, it is mine. One of my friends gave it to me as a gag gift for my birthday.” She snatched it out of his hand and shoved it into the mammoth black bag she called a purse.
Travis struggled to talk, as he always did around her. Thinking about her and condoms in the same sentence was threatening to short-circuit his brain. He hated his reaction because it made him feel like a randy teenager with a crush. Which is basically what he had on her. A giant crush. Her tan cheeks were a bright crimson as she met his gaze again. At least he didn’t see tears in her eyes anymore. He couldn’t handle the thought of her upset.
“You leaving? I thought I might catch you before you got off work.” He was pretty sure his sleep-deprived brain had taken over but he wouldn’t complain. He needed to ask her out and if she rejected him, he’d get over it and find another place to get coffee.
Her face brightened for a moment, her cheeks flushing even darker. “Really?” Before he could answer she sharply shook her head. “Uh, I’ve got to go. I don’t have time to talk right now, Travis. But I’ll see you later.” Now the stress was back, full force. It was so potent, it was practically surging off her in visible waves.
As she started to hurry down the sidewalk to the end of her building where she usually parked, he fell in step with her. “What’s going on, Noel?” He’d never seen her like this before. Normally she had a bright smile for everyone.
She gave him a guarded look and he could practically see the wheels turning in her head. He’d taken out his ear and eyebrow piercings for his last job but he still had visible tattoos and, for some reason, he felt as if she was sizing him up. Finally she sighed as they rounded the corner of the building. “I mentor as a Big Sister and Juanita, that’s my mentee’s name, called me a few minutes ago and she’s really worried. Her mother’s ex-boyfriend has been hanging around lately and she swears he’s never been abusive to her, but he’s been giving her the creeps. He only stops by when her mother is working and she said she thought she saw him drive by more than once.”
Adrenaline punched through him. Noel was tall and lean with a runner’s body so she wasn’t some fragile thing, but still… “You’re going over there by yourself?”
She shot him an annoyed glance. “Yeah.”
“Do you know anything about this guy? If he has a record, or possible weapons or—”
“I don’t know anything other than Juanita is scared. I tried calling the cops but they said they couldn’t do anything other than send a patrol car down the street.”
He admired her protective response but he wasn’t letting her walk into a situation like this alone. “I’m going with you,” he said as they reached her green, four-door hybrid car.
“Excuse me?” She looked up at him now, her keys dangling from her left hand.
Bending down, he lifted his pants pocket where he had a weapon holstered. “I have a permit and you already know who I work for. What harm can it do to have me along? If the guy is there, chances are he’ll be more apt to walk away if I’m with you.” People tended not to fuck with him because of his outward appearance. And if they did anyway, they learned fast that he fought dirty and took down his enemies any way he could. When she bit her bottom lip but didn’t respond, he continued. “Think about what’s best for Juanita.”
At those words, he could see the decision made in her eyes. Even though she still looked slightly unsure, she nodded. “Get in.”