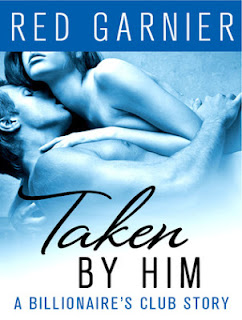 Taken by Him (The Billionaire’s Club # 2) is the newest book by Red Garnier. The release date was May 28, 2013 and the publisher is St. Martin’s Press. From the back cover.~

The Billionaire’s Club: The wealthiest, most powerful men, not only in Chicago, but in the world.  They are used to having whatever they want, whenever they want it.

Peyton Lane has always been serious and responsible and she’s determined to have some fun for once in her life.  And that means a deliciously, sexy affair with a stranger while she’s on vacation.  So when a blond Adonis named Luke crosses her path at the Cancun resort, she’s determined that he will be the one. But Peyton gets more than she bargained for when Luke introduces her to a passion unlike any she has ever experienced and she discovers that behind that charming smile are secrets and a beautiful, damaged soul.
I saw many of my friends talking about this series on twitter, and was really glad I was approved for a review copy from NetGalley thanks to the publisher. I did read Claimed by Him (The Billionaire’s Club #1) before I read Taken by Him.

I really liked both Peyton and Luke. Luke is a bit of a manwhore, but he there is just something about him that makes me love him even though he is a total slut. I totally loved that Peyton was on vacation and wanted to have a fling while away. Peyton and Luke have awesome chemistry from the moment they meet, and I really wanted them to work as a couple. I had a couple of problems with this book. One is the fact Luke and Peyton didn’t use condoms when having sex. I’m fine with anyone who wants to have a fling, but think you need to be safe while having your fling. I also had a problem with Luke not being honest about his last name. I did understand him not telling Peyton in the beginning, but I could feel how much they had come to care for one another, and it bothered me he didn’t tell her the truth before they left.  I understood Peyton’s anger when she learned who Luke really was, yet still wanted them to find a way to work things out.

The passion between Luke and Peyton is off the charts hot from the very beginning. I loved that Luke talked dirty and it seemed to make Peyton even hotter. I loved how hard and fast Luke fell for Peyton.  It’s so fun to watch the bad boy fall in love. Luckily for Luke, even though she was angry, Peyton had fallen just as hard for him.

Red Garnier is a new-to-me author, and I’m so glad I found her books. I really enjoy her voice and have fallen for many of her characters. I look forward to reading more books from this series. To learn more about this series or other books from Red Garnier, check out her website.
Posted by mslizalou at Sunday, June 23, 2013