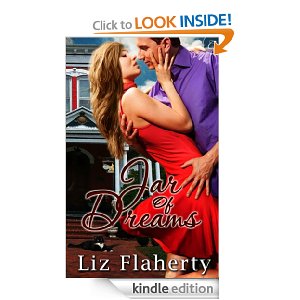 Jar of Dreams is the newest release from Liz Flaherty. The publisher is Carina Press and the release date was January 14, 2013. From the back cover.~

For as long as she can remember, Lucy Dolan has been jotting down her hopes on slips of paper and saving them in a pickle jar—her jar of dreams. It was the first thing she saved when the beloved family diner went up in flames, and it's safely buckled in her beat-up minivan when she lands in Taft, Indiana, to start over. She rents a room and goes into business with her landlady, but then Gert's nephew comes charging in to "rescue" his aunt.

Boone Brennan will be damned if he'll let Lucy take advantage of Aunt Gert, who raised him and his sister. Believing that she's just passing through, he's deeply suspicious of her—despite the sparks that fly between them.

Just as Boone and Lucy are starting to open up to each other, a series of fires throws Lucy under suspicion. Boone wants to trust her and his feelings, but with the whole town against her, will he stay by her side? Or will Lucy move on and find another place to make her dreams come true?

I was lucky enough to get a review copy from NetGalley thanks to the publisher. I’d read another book by Liz Flaherty and really enjoyed it.

First I have to say how much I love the characters Flaherty writes. I loved Aunt Gert, Lucy, Sims and Boone as soon as we met them. Took me a bit longer to like Boone’s sister Kelly and their cousin Crockett, but I ended up really liking them too. I also loved the instant attraction between Lucy and Boone. Even though he didn’t want to have feelings for Lucy in the beginning, Boone couldn’t seem to stay away from her. I really loved Lucy and Boone together. They both had loss in their past, so could understand loneliness.

The series of fires that happen seem to follow Lucy around. While I knew Lucy had nothing to do with the fires, it looked very suspicious to everyone else in town. I will say I figured out who was starting the fires before it was revealed, and I understood why this person started the fires, but was still hoping I was wrong in my guess. I didn’t guess the reason behind the fires, but could see the reasoning once it was explained.

I think part of the reason I took longer to warm up to Kelly was because she was really pretty ugly to Lucy in the beginning, as well as the rest of her family. I could see how much she really loved her family, so I gave her a pass for some of her attitude. She probably changed the most in this book and I really hope we get her story at some point in the future.

Jar of Dreams was a very enjoyable story. The characters are some I’d love to visit with again in the future. I really hope we get more books set in Taft, Indiana from Liz Flaherty.