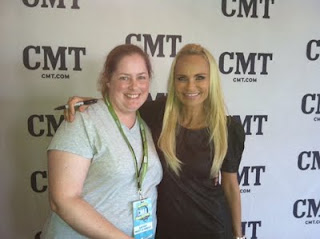 I’ve lived in Nashville since late 1995, and last week was the first time I attended CMA Festival (formally known as Fan Fair). Let me just say it is a known fact in Nashville CMA Fest weekend will be the hottest weekend to date for Nashville. However, my friend Paula and I made plans to go a while back, so I stocked up on SPF 50 sunscreen and decided to give it a try.

The whole weekend was hotter than 18 hells. No other description comes to mind for me. In fact, at one point I saw a temperature reading of 101* on the church sign next to the Bridgestone Arena. There were all sorts of fun things to do throughout the day. Lots of free concerts by new artist and even some well known artist were happening all over the downtown area. You could go to the convention center and hopefully get in line for pictures and autographs from artist. Tickets for the signings were given out when the doors to the convention center opened at 10:00 am each morning. Picture Black Friday and the mall opening, and you have a pretty good picture of trying to get in line for tickets each morning. I did manage to get in some hopeful lines and was able to meet Craig Morgan, Joe Nichols, and a couple of other artist. The highlight for me was meeting Kristin Chenoweth at the Wildhorse Salon on Saturday. I’ve been a huge fan of hers since I heard the Wicked soundtrack for the first time, and she is one of my favorite guest stars to appear on Glee (hope she is back again next season). She has a country album coming out in September, and I’ll buy it on release day. She sang a few songs for us and I loved them all (she really makes me think of Dolly Parton).

While I enjoyed every single performance, I have to say Martina McBride blew me away! She got a 5 minute standing ovation following her performance of Broken Wing. I now have several concerts on my wish list for the future. I would love to see a full concert by Zac Brown Band, Brad Paisley, Lady A, Keith Urban, Blake Shelton, Miranda Lambert, and Sugarland (again).

Not sure I’ll do CMA Fest again next year. I love the nightly concerts, but the daytime heat was really too much for me. I'm not a big fan of temps so high, I feel sick most of the day. I did have a fun time overall, and can say I'm glad I went this year.